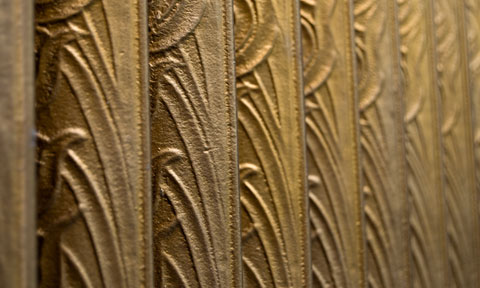 I once got a call from an engineer who had inspected a huge home in Toronto for a prospective buyer. The house, built in the 1920s, had a two-pipe-steam heating system, what the Dead Men called a "vapor" system. This engineer had never seen the likes of it, but that didn't stop him from poking around. He noticed the boiler was in a three-foot pit, and that didn't make much sense, but since he was the engineer, he didn't think he should admit that. So he poked around a bit longer, and then he started the boiler, which seemed to work just fine. It heated the house evenly and quietly, and that's what he wrote in his report. "The heating system is just fine," he wrote.

The prospective buyer, who was ridiculously rich, bought the place, based largely on the engineer's recommendation. The first thing the rich guy did after moving in was to have the old steam boiler removed, and a new one installed - but on the other side of the basement. Why did he do this? Because he could.

Naturally, this upset the balance of nature that exists in every old steam system. All the pipes now pitched the wrong way, and the new boiler no longer sat snugly in its pit. This was not good. The system started to knock and bang in furious anger. Most of the radiators went stone cold, water shot from the main air vents, the radiators rumbled like coffee percolators, and the fuel bills soared.

And that's why the engineer was calling me.

Now, I realize this story may send you screaming from that next old steam system you run into, and if old stuff scares you, that may be the best thing for you to do. But if you're looking for a market niche with little or no competition, you should prepare yourself for the old stuff, and then take it on with a big smile on your face. It's not that difficult; you just have to keep the following basic principles in mind, and then step lightly.

There has never been a steam system that didn't need to be vented. If you don't see the vents, you're not looking hard enough. Steam pipes are never empty; they're always filled with either steam, air or condensate. Many fuel-oil dealers mess up by forgetting about air because they can't see it. But air is very real, and where there is air, steam will not go. To get the steam to go where you want, you have to vent the air. Old systems had some pretty weird-looking air vents. Poke around. You'll find them. If they're plugged, replace them.

Main vents are crucial to steam heating. Every steam system needs main vents near the ends of the main, even if there are air vents on the radiators. You have to treat the air in the mains and the air in the radiators as two separate challenges. If you remember this, your heat balancing problems will go away. Main vents, when properly installed, can work wonders.

Steam traps create steam distribution. Steam traps keep the hot side hot and the cold side cold. When they're not working (on two-pipe steam systems) you'll lose your system balance. You should always have about a 15-degree F. temperature difference across a thermostatic radiator trap. If don't see that drop in temperature, the trap has probably failed and steam is moving into places where it doesn't belong. Once it gets there, it will raise the pressure on the outlet side of the radiators. That's when the trouble begins.

You won't see a temperature difference across a float & thermostatic or a bucket trap, however. To find out if these are working you have to open a fitting (usually a union) at the trap's outlet and then watch what comes out. If the trap is good, you'll see condensate and some flash steam. If you see live steam, fix or replace the trap.

If you don't see traps on two-pipe radiators, look for something else. You have to stop the steam from reaching into the dry returns, so if you don't see a trap, suspect that there's an orifice in either the supply valve or the union elbow. The Dead Men sized orifices to allow in only about 80% of what the radiator could condense. If you replace the supply valve or the union elbow, you'll have to add a thermostatic radiator trap.

Some old vapor systems used special return elbows that contained check valves, or dip tubes, or stainless steel balls. They all did the same thing: they kept the hot side hot and the cold side cold. If you have to remove these old devices, replace them with thermostatic radiator traps.

Some boilers belonged in pits. Like the one in Toronto. The pit allowed for a height difference between the ends of the steam lines and the boiler water line. We call this a gravity-return system. A combination of static pressure (from the height difference) and the "leftover" steam at the end of the main put the water back in the boiler. Without the pit, you might not have enough static height. The water will back up into the pipes, making the system bang and hammer. And that's when the heartache begins - just as it did in Toronto.

Wet returns are the pits. Steam systems are constantly dissolving and everything eventually winds up in the wet return (the piping below the boiler water line). And once enough sludge settles there, the condensate won't be able into get back to the boiler. Instead, it will back up into the mains and cause the pipes to hammer, usually in mid-cycle.

If you see old wet returns, assume they're clogged until you've proven otherwise. Flush them through with a hose and see what comes out. In many cases, you will find stuff left over from the birth of the Universe. Replace those old returns, if you can.

Steam boilers need to be cleaned after you install them. And I honestly don't see how you can do this properly in less than a day. If you don't figure into your price the time it takes to clean the boiler and the system piping, you're going to have a steam system that knocks and hammers and goes off on low water and drives both you and your customer nuts.

Steam heating pipes can support just so much radiation. If you connect too many radiators to a steam main, some of them will never get hot. Think of steam heating as a battle between the boiler's ability to make steam and the system's ability to condense steam. A Dead Man sized those pipes to carry just so much steam to the radiation, taking a certain pressure drop along the way. Then he figured his boiler and piping location based on that pressure drop. The more radiation you add, the larger the pipe must be. If you connect too much radiation, the system won't work.

Steam pipes must be insulated. If the pipes aren't insulated, they'll give off too much heat. As the pipes give off too much heat, the steam will condense. And if the steam condenses in the pipes, it will never reach the radiators. That's why the Dead Men insulated their steam pipes. They used asbestos. Don't think you can remove asbestos and not replace it with some other insulating material. If you leave the pipes bare, you'll wind up with a cozy basement, but the folks upstairs will freeze and think ugly thoughts about you.

You can heat any house in the world on less than two pounds of steam pressure. I don't care how big that house is, you can heat it with extremely low pressure. How do I know this? The Dead Men told me so. They wrote it all down in these dozens of ancient books I have on my shelf. The pressure you need depends on the size of the pipe, not the size of the building. If you lower the pressure, the steam will move more quickly to the radiators. I know that doesn't make sense, but try it once and you'll see what I'm talking about. When it doubt, crank it down!

The piping around the boiler is crucial to the boiler's operation. Today's oil-fired steam boilers are ferocious. They jump all over that old piping with a combination of steam and water. To be successful, you have to dry out the steam before it hits the building. That's the job of the near-boiler piping. It dries out the steam. Nowadays, boiler manufacturers consider the near-boiler piping to be a part of the boiler. If you don't follow their piping instructions, you will fail miserably.

And who needs that sort of an adventure?