If radiators could talk, I think they would tell us they don't get no respect, just like Rodney Dangerfield. I was thinking about that last July, while The Lovely Marianne and I were lounging on the porch in beautiful Cape May, New Jersey. We've been driving down to Exit 0 on the Garden State Parkway for nearly 40 years. We love Cape May because time moves more slowly in that Victorian city by the sea. It's true.

It was about 90 degrees and humid that day, but TLM decided that she just had to see this stained-glass exhibition at the Carriage House, which is on the grounds of the Emlen Physick estate, a place we knew well, so off we slogged.

There are hundreds of Victorian cottages in Cape May, and most of them are fully restored and prettier than prom queens. I think Emlen Physick's place, which they put together like a gingerbread house in 1879, is the best one of all. Emlen graduated from medical school back in the day, and immediately managed to inherit a ton of money, so he just sat on his porch and never practiced medicine. He also never married. He lived out the rest of his days just rattling around the mansion with his mom and his spinster aunt. People probably talked.

When he became a Dead Man, Emlen's cousins took over the place and lived there for many years. The mansion eventually passed into the hands of a construction company. These folks wanted to turn the place into a fancy restaurant, but the city didn't approve of that, so the construction folks got frustrated and decided to bulldoze the mansion and build tract housing over the hole. This happened around 1970.

Cape May was seeing some tough times in the '70s, but the folks who lived in that city by the sea realized that if they let the bulldozers roll over Emlen’s house, there was no telling where that would stop, so they formed an organization and eventually got the city to buy the house from the developers. That led to the restoration of the rest of the old Victorians, and thanks to them, we now have this gem of a city at the very bottom of New Jersey. The whole place is a National Historic Landmark. Only two other places in the country hold that distinction – Alamo, Texas, and Williamsburg, Virginia. Pretty cool, eh?

You can tour the Physick estate for just a few bucks, and on one of our early visits to Cape May, that's just what TLM and I did. A lovely woman guided us and a dozen others through the estate and pointed out every detail about the furniture, and the wallpaper, the gaslights, and the rugs, the beds, the family’s eating habits, and everything else you can imagine - except for the heating system, which was all I cared about. I’m sure you understand.

Our guide mentioned only that when Dr. Physick had his house built in 1879, he went to the trouble of having a central heating system installed. “And here it is!” she said, pointing to a cast-iron column radiator made by the Bundy company. I drooled.

The guide showed us quilts, and photographs, and mantelpieces, and tiles, and bathtubs, and even a crucifix made from the hair of a dead person. She carried on and on, but had nothing further to say about the gravity-hot-water heating system. By the end of our tour, as she was shoving us into their gift shop, I could stand it no longer. “Would it be possible for me to see the basement?” I asked.

“Because I’m in love with old heating systems. I need to see what’s attached to the other end of those radiators.”

“Oh,” she said. “I’m sorry, but you would be disappointed. There’s nothing down the basement anymore; the workmen ripped it all out years ago. There are only shelves for storage; everything is clean and painted white now.”

“Well, how do you heat the house nowadays?” I asked.

“No, I mean what sort of heating system do you have?” I hadn’t seen anything other than the radiators, and now that she told me they weren’t attached to ancient pipes, I was starting to think that maybe they did something with staple-up radiant, or whatever. “Not the fuel,” I said. “I meant the system. What type of system is it?”

“It’s gas,” she said, trying her best to close the door and leave me in the gift shop with the rest of the tourists.

“But,” I carried on, “I saw indirect heater ducts in the second-floor bedrooms, you know. I’m sure Dr. Physick had the architect figure on those because he wanted lots of fresh air. There would have been huge, cast-iron heaters hanging in the basement. The fresh air would have passed over those heaters on its way upstairs. He would have done this because Harriet Beecher Stowe was running around the county in those days, warning people about the dangers of being in a closed room with those gaslights.” I pointed up at the gasolier. She looked up at it too, a bit more interested now.

I forged on. “There was a man named Lewis Leeds, who traveled with Harriet. He was in charge of heating hospitals during the Civil War and everyone in the country believed him, and Harriet, too, of course. They talked about the 'National Poison,' which was the air inside these houses. There wasn’t enough ventilation, and they thought that was why so many of the children were dying back then. They were probably right. That crucifix made from the human hair may have come from one of those dead children. Now, can’t I please go to the basement?”

And that was that. I never got to poke around down there. 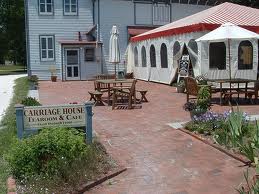 So there we were, many years later, in the Carriage House, looking at beautiful photographs of stained-glass windows from around the city, along with a few actual windows, and that's when I noticed the radiator that got no respect.

It hugged the far wall, like an old, beaten dog. It had lovely scrolling and once carried steam to warm the people who drove the carriages. I knew it was a steam radiator because each section connected only across the bottom. Steam is lighter than air, and will rise to the top of an old, column radiator such as this one. Hot-water radiators have push nipples across both the lower and upper portions of each radiator section. That's to ensure good circulation. They also used hot-water radiators on steam systems, but the one in the Carriage House was definitely of the steam-only variety.

And that's why some cruel, modern-day butcher had drilled holes into the top of each of those gorgeous, Victorian sections and installed a crooked row of screws to use as air vents. He did it so the radiator would run on hot water. From one side to the other of this beautiful and noble old radiator, screws sprouted like pimples on prom night, looking as ugly as mortal sin. "Oh, the horror!" I said to The Lovely Marianne.

"You're ridiculous," she said.

"And look at the pipe work!"

The butcher had run twisted, dirty, copper tubing from here to there, with no concern whatsoever for plumb lines, levels, or the art that is heating, and with no respect at all for that once-beautiful, old radiator. Not only was it drilled to death, it also had to be in the same room with that twisted copper and the dog-balled fittings. Solder dripped like snot from those fittings and it made me want to cry.

"Why don't you look at the stained glass," TLM said.

"Look at that stop valve!" I pleaded, pointing to the ugly thing. "No handle, a bent stem and it's leaking water onto the floor. It's not even old and it's killing the wood. They show so much respect for colored glass, yet so little respect for this Victorian, cast-iron beauty that has warmed souls for more than a century."

TLM rolled her eyes and walked off to the gift shop.

I touched the old radiator on its shoulder. "I'm sorry for you," I said.

It wept another tear onto the wooden floor. No respect. No respect at all. 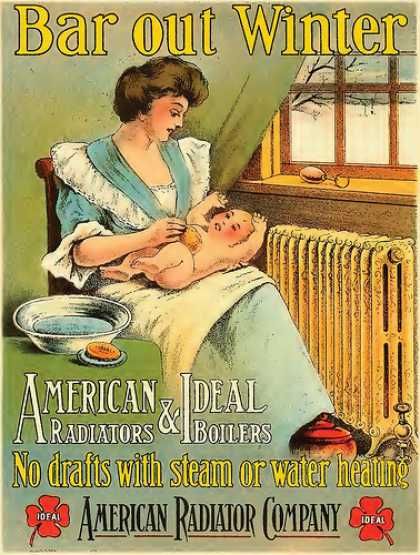