Not far from where our daughter, Colleen, and her husband, Adam, used to live in Somerville, Massachusetts, there’s a house that’s for sale.

It’s an old house, built in 1900 and not very elegant. It’s a place you’d want to own if you had a big family, or if you wanted to rent to a bunch of tenants. It fits well into a neighborhood of ordinary homes, and it’s selling for nearly a million bucks because it’s that close to Boston.

Daniel Chapman, who died from heart disease on August 21, 1899, lived in a house that was on that land before the current house arrived. He left a widow and two married daughters. For some reason, his widow had the house knocked down and this one built within months of his death. I don’t know why. Perhaps the old house held too many memories, or maybe she sold and moved in with one of her daughters. I wonder about that whenever I pass by. I’ll never know for sure but it’s worth thinking about because of Daniel Chapman.

He was 69 years old when he died. I was just reading the notice of his death in The Metal Worker magazine, which came out on September 2, 1899. I have all the issues of that long-gone magazine for 1899 in a bound text. It smells nice, like an old bookstore.

Daniel Chapman lived a good long life for his time. His grandfather was a captain in the American army during the American Revolution. Daniel Chapman was a machinist by trade and he worked at the Charlestown Navy Yard, which we now call the Boston Navy Shipyard. It’s one of the oldest shipbuilding facilities in the U.S.

The Civil War broke out and the Navy offered him a position as Acting Third Assistant Engineer on the R.B. Forbes, which is a fine place to learn. The ship went down in a gale during 1862 but all of the crew survived and Daniel Chapman transferred to the U.S.S. Roanoke.

That ship had begun its life as a wooden-hulled, steam frigate. The men in the shipyard turned it into an ironclad and sent it to war, but she was top-heavy and not a well-engineered ironclad. She rolled way too much and couldn’t operate in shallow ports, so the Navy assigned her to harbor defense, which was what she was doing on March 8 and 9, 1862, as the Monitor and the Merrimack pounded each other. Daniel Chapman watched that battle through a porthole. Just imagine what that was like.

Later that year, he resigned his position because of health issues, but once he recovered, he signed on as the Acting First Assistant Engineer on the U.S.S. Queen, which also saw action. He later sailed with David Farragut, who purportedly said, “Damn the torpedoes. Full speed ahead!” at the Battle of Mobile Bay.

Daniel Chapman saw much in his long life and I think about him whenever I pass through Somerville, Massachusetts. How peaceful it must have seemed to him after the war, such a fine place to raise daughters. He was working as a machinist at the J.J. Walworth Manufacturing Co. by then. James Jones Walworth and his brother-in-law, Joseph Nason, 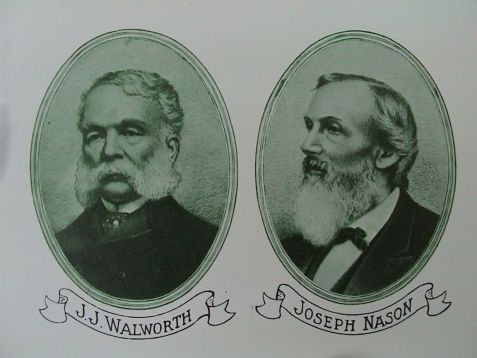 had gone into business together in 1842 down in New York City. They called the company Walworth and Nason and they were the first heating contractors. They more or less invented the radiator as we know it today. Walworth and Nason later moved to Boston and got some good work going. They even installed the new steam-heating system in the White House.

And then Mr. Nason decided to break the partnership and move back to New York. They say he couldn’t take the brutal Boston winters, and that makes me smile, considering that he was the first heating contractor and all. Mr. Walworth changed the name of the company to the J.J. Walworth Manufacturing Co. and went on to become a major manufacturer of valves.

While working for Mr. Walworth, Daniel Chapman and his cousin, John Chapman, came up with the idea for a tool they called a pipe tong. It made the turning of gas pipes easier and it caught on. They got a patent for this on October 31, 1865. All those years spent on ships were paying off.

Four years later, Daniel Chapman received another patent, this one for a tool that he had first whittled out of wood. He showed this tool to Levi Greene, who had been an engineer during the war on one of the ships where Daniel Chapman had been the fireman. They must have been delighted to find each other working at the same company after the war.

Mr. Greene showed the wooden prototype to Mr. Walworth, who told Daniel Chapman to go to the pipe room in the Devonshire Street shop and try it on a piece of 1-1/4” pipe. A half-hour later, Daniel Chapman returned with a broken piece of pipe and an intact tool. Mr. Walworth told him to go back to the factory and have the foreman make up 24 copies of the tool, in metal and in different sizes. Daniel Chapman returned a few days later with these. Mr. Walworth then sent him to the Patent Office to protect himself. And isn’t it amazing that the owner of a company would do that for someone in his employ?

Once the patent became final, Daniel Chapman offered to sell it outright to Mr. Walworth. He thought $2,500 was a fair price. His family was growing and he needed the money. He also didn’t think any future royalties would add up to much more than that, but both Mr. Walworth and Mr. Greene urged him to keep the patent for himself and to accept royalties from the company. Can you imagine that happening today?

Daniel Chapman lowered his asking price to $1,500 for the full patent rights and still Mr. Walworth said he would not buy that patent. He instead urged Daniel Chapman to allow the company to have exclusive rights to make the tool and to take the royalties that were sure to come. Daniel Chapman reluctantly agreed, but then asked for a very high royalty. This made the tool too expensive for most of those in the trade, even though the contractors who had seen the tool yearned for it. Its durability and simplicity amazed them, but it was just too expensive.

Months passed and Daniel Chapman finally agreed to a lower royalty, one that brought the tool into the affordable range. It sold and sold and became one of the world’s best-known and widely used inventions. More than $100,000 in royalties rolled in and Daniel Chapman was able to raise those daughters in that house in Somerville. He went on to file and receive 20 additional patents. He invented new types of fire extinguishers and sprinkler heads. He also held a number of important municipal positions in Somerville and was well-respected by all. If you stop by the Somerville Public Library you can see his name on the 1884 bronze plaque, along with the other members of the Building Committee. This was a good man.

The patent protection for the tool he had whittled from wood eventually ran out and many other companies began manufacturing it. Walworth Co. continues to manufacture and sell them and I know you own more than one of these tools.

Oh, and I should mention that Daniel and Chapman were the man’s first and middle names. His last name was Stillson. Think of him the next time you reach into your toolbox for that durable Stillson wrench that will forever carry its inventor’s proud name.

Think of him. Remember him. Thank him and smile.