Henry's Law, And How It Came To Be The first time I saw a Spirovent air separator in action was at a plumbing supply house in Brooklyn, New York. It was set up with see-through piping and I got to use a bicycle pump to inject air into the moving water. I stood there for a while, pumping away. The Spirovent caught the air and spit it out. It was fun, but then, I’m easily amused.

The salesman smiled at me and told me about microbubbles (a new term for me), and how they would collide with and adhere to the inner workings of the Spirovent, and then leave by way of the vent. He also mentioned Henry’s Law, which was something I had never heard of at the time, but I nodded with great respect nonetheless. Didn’t want to look dumb. 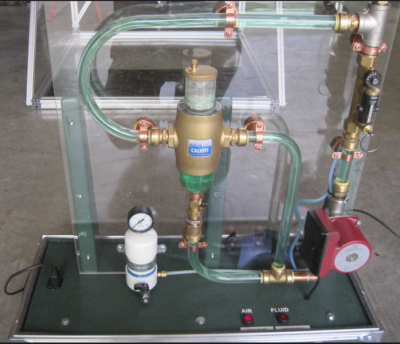 When I got back home, I looked up Henry’s Law in the dictionary and learned that it had to do with the way a gas will dissolve in a liquid, depending on pressure. It turns out the more pressure you put on a liquid, the more gas it will hold in solution. Vice versa, of course. Oh, and the hotter water gets the less air it will hold in solution (and vice versa). I sort of knew all of that by watching water boil and soda pop open, but I had never put a name to it. Now I knew.

And that got me thinking a lot about club soda. I had written a book called Pumping Away and I needed a simple visual that would show what happens to dissolved gas when you lower the pressure on the water. Club soda fit the bill. I started taking a bottle of that fizzy stuff with me whenever I left home to do a seminar. Shaking a bottle of club soda and popping the top is a marvelous way of demonstrating Henry’s Law to a group of contractors, and one they will long remember. Well, at least the ones in the front row will remember.

I did this for years (still do) but I never gave much thought to who the Henry of Henry’s Law was, so one day I decided to look into that. I did this because I am curious by nature, and because I have too much time on my hands. Here’s what I learned.

Bill Henry’s daddy, Tom, was a rich doctor who also owned an industrial chemical business in Manchester, England in the late 1700s. (Try putting those two professions together nowadays. You could probably make your own patients.) Tom Henry was the first guy to suggest that you could bleach clothing with chlorine. How about that? Isn’t it good to know that Clorox and the proper location of hydronic air separators have their roots within the same family?

Anyway, Little Billy showed up just before Christmas in 1774 and all went well until he reached the age of 10. That’s when a beam fell from the ceiling, landed right on him, and left him with chronic pain for the rest of his life. Because of this, he wasn’t able to play with the other kids so stayed inside and hit the books. He hit them hard.

At 16, he began studying medicine, and at 21 he entered the University of Edinburgh in Scotland, but only stayed a year. He left the university to help his father with his medical practice and to work in the family business. He spent the next 10 years doing original research in chemistry, which plays a big part in this story. And then, because he didn’t like to leave things undone, he returned to medical school at 31 and got his medical degree two years later. Oh, and he did his dissertation on, of all things, uric acid (a.k.a. pee), which I think is splendid because it ties Bill Henry even closer to the business of plumbing and heating.

Now we are all influenced by those who came before, and Bill Henry was no different. A generation earlier there had been a fellow in France by the name of Antoine Lavoisier. Heard of him? He was the guy who first said that matter can neither be created nor destroyed, and he also gave names to two things that are pretty important – those being oxygen and hydrogen. Lavoisier also came up with the first extensive list of elements, and helped create the metric system.

So there. What have you done today?

And you would think that the French would have appreciated all of this, but at the height of the French Revolution, someone accused Antoine Lavoisier of selling watered-down tobacco, so they chopped off his head.

Bill Henry was fascinated by Lavoisier’s work, and in 1801, while still working with his dad, he put together a book about it, and he did a fine job of explaining it all. He called the book, Elements of Experimental Chemistry, and this went through 11 editions over the next 30 years. He kept adding to it, and it was this work that introduced generations of chemists to the Frenchman’s careful use of experimental measurement. Bill Henry was just 27 years old when wrote that book, and two years later he published the paper that established what we now call Henry’s Law. Years and years after that, I’m in some plumbing supply house in Brooklyn and an air-separator salesman is bringing it to my attention.

And how about this? Henry’s Law came about because Bill Henry was sitting around wondering why our atmosphere, which is composed of all these different gases, each with its own density, doesn’t separate into layers like oil and water. I’ve never wondered about that. Have you? I mean I’ve gone through 60 years of life without once considering that. Gosh.

It was Bill Henry’s initial thinking about our mixed-up atmosphere that lead to the theory of mixed gases, which we today credit mostly to Bill’s pal, John Dalton.

I have to tell you about him. You’ve probably never heard of him. I hadn’t. He’s the guy who figured out that atoms make up everything. These two guys were hanging out together. One’s figuring out atoms and the other’s wondering why all the atmosphere doesn’t look like a seven-layer cake. They’re buds.

And Dalton was brilliant but he was also clumsy and careless around the lab. Oh, and he had very little money for experimenting (he was a teacher). His buddy, Bill, had lots of money, though, and even more patience, so the two men worked together like salt and pepper.

They did most of their experiments with gases because gases are chemically simpler than other forms of matter, and when you’re looking for atoms, this helps. Out of all this experimenting came Henry’s Law.

Think about that the next time you’re installing an air separator, or wondering why the air keeps coming of that compression tank.

So John Dalton goes on to become famous for the atomic theory, which is very cool because suddenly, the world could identify and order elements. From this comes the Periodic Table of the Elements, something you probably had to study in school at some point. Ugh.

John Dalton and Bill Henry are the guys who gave us H2O. Think about that the next time you’re purging those pipes.

And how’s this for being wonderfully human? Although Bill Henry’s experimenting helped John Dalton come up with atomic theory, Bill didn’t want to back it. As he got older, he became more reluctant to accept change. He didn’t like it when his experiments pointed to something other than what he expected. He held onto his old beliefs, such as insisting that heat has mass (it doesn’t)

In 1824, a series of unsuccessful surgeries on his hands took away his ability to manipulate instruments. He quit chemistry and turned his full attention to medicine, specifically to the spread of contagious diseases.

In 1831, a cholera epidemic hit the United Kingdom and it was horrible. Nowadays, we know that the way to prevent the spread of cholera is to wash our dirty clothing in real hot water and chlorine bleach, which Bill’s father, Tom, had promoted years earlier, but they didn’t try chlorine then. Rather, Bill came up with an inexpensive and simple device that used heat to disinfect clothing. It worked and it probably would have saved countless lives, but for some reason, Bill Henry decided that he didn’t like the idea of the device, so he abandoned it. Thirty years later, Louis Pasteur came up with the germ theory of disease and we all began to pasteurize things with heat. Thirty years later.

In 1836, chronically depressed and filled with the pain that been with him since that long-ago childhood accident, Bill Henry took his own life.

And I hope you’ll never look at those air separators and compression tanks in quite the same way ever again.