Once upon a time in New York City, William J. Baldwin, an engineer by trade, wrote a book called Steam Heating for Buildings. The year was 1888. In the back of this book, there are a number of advertisements for companies that were relatively new at the time.

There's an ad for Nason Radiators. These beauties had a series of vertical tubes that looked like rifle barrels. Each was capped at the top and there was an ornamental iron cover, just for good looks. I still see these radiators in service, 120 years later. Nason made them on Beekman Street, which is just a few blocks from Wall Street and Gold Street (where Steven Gold made his radiators). Nason, along with Gold were the first makers of American radiators. Oh, and also on Beekman was Tuttle & Bailey Manufacturing. They started in 1846, and they're still going strong, although no longer on Beekman.

Jenkins Bros. made their valves right in the same neighborhood, on John Street. Consolidated Safety Valve and Worthington Steam Pumps built their products on Liberty Street, on the southeast corner of where the Twin Towers once stood. Imagine having foundries in those crowded neighborhoods.

Donnelly Systems, one of the big names in vapor heating, were on Murray Street (also in the neighborhood). A bit further uptown, on 13th Street, Kieley's Steam Heating Specialties made some very interesting things for the steam trade. I did a seminar in New York City last summer and one of the guys in the class showed me some photos of Kieley equipment that he was trying to figure out. This stuff is still on the job, even though the company is but a memory.

Mr. Baldwin kept his offices at 84 Fulton Street, very near the old Fulton Fish Market. He was right there with all the manufacturers, and that got me thinking about taking The Magical History Tour.

I downloaded a map of lower Manhattan, printed it, and used a red pen to mark all the places where these famous companies once made things. I didn't know if I'd find towering modern buildings there now, or parking lots. I just kept thinking about those long-gone foundries within the tightness of those crooked streets, and the hordes of people who came and went with wagons and horses more than a hundred years ago. Whatever is there now didn't matter to me as much as standing in the places where the potential for both invention and disaster once reigned. I'm funny that way.

Oh, and there was one more company down there in that neighborhood that really caught my interest. It was Gillis & Geoghegan, at 118 Wooster Street. These men did the heating for the New York Stock Exchange and Saint Patrick's Cathedral. They did a whole lot more, of course, but those two trophy jobs were enough to get me all jumpy inside.

G&G were manufacturers and contractors, a practice that was not uncommon in the early days of heating. You designed, sold and installed what you made. I figured their building would still be there because Wooster Street is still made of cobblestones and the curbs are still granite. To walk there is to walk in Old New York.

That red-dotted map sat on my desk for weeks before I called my buddies, John and Alex. I wanted to think about it, and be with the right people when I took the walk.

About these guys: John's a superb New York City contractor who deals daily with the mechanical museum that is our town. Alex is a computer consultant, who also happens to love history. He's a genius when it comes to anything that has wiring. He works with John from time to time on special projects. I asked them both if they wanted to take a walk. They did, so we agreed to meet for lunch at a seafood place down there in the neighborhood.

I arrived at noon, John a few minutes later. Alex got there about an hour and a half after that because he lives in his own time zone. John and I sat at the raw bar and settled into an iced dish of oysters and clams and a fine bottle of white wine. We chatted with the happy barmaid, and listened to the sounds of the city filter in through the glass. We had another glass of wine.

Alex showed up as we were finishing our lunch. He ordered his lunch, and John and I figured it would be impolite to have Alex dine alone, so we had some more wine. Just to be polite.

It was a steamy, sticky day, but oh so comfortable there at the raw bar. We sipped and talked about how we were going to go about the dozen buildings on my list. Which one should be first? Which one next? People staggered into the cool restaurant, pummeled by the wet heat. We looked at each other, and at the wine glasses, and at each other again, and at the sweaty people. We shrugged and got up.

The heat came off the pavement like an uppercut and we looked at each other again and back at the bar. "Let's do just one building," I said.

"We can do the rest in the fall," John agreed.

"Sounds good to me," Alex said.

It was several blocks to the six-story building on Wooster Street, where Gillis and Geoghegan did business in 1884. It now houses a clothing store and some offices above. There's an old, golden sign on the face of the building that reads, United Brush Manufactories. 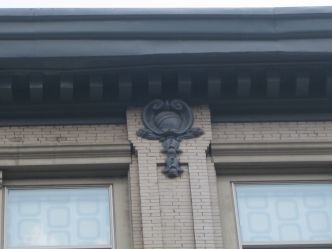 Heating equipment, to brushes, to clothing. That's enough to confuse any building, but this one still looked proud. John and Alex stood in front of the building, and I crossed the cobbled street to take a picture of them waving at me. From this building came the steam heat for the New York Stock Exchange and Saint Patrick's Cathedral, the largest Catholic church in America. I looked up toward the roof, and down toward my buddies. I crossed the street, stood there with them for a moment, shrugged, and suggested we go to a bar.

John knew of one just around the corner that is older than 118 Wooster Street. We sat there for a good while in the muted light, and we talked about life.

Gillis & Geoghegan quickly outgrew their space on Wooster Street because steam heating was becoming a big deal toward the turn of the century. They moved to a larger place at 35 South Fifth Avenue, which we now call West Broadway. They had the lower floors and the basement. On the upper floor was the laboratory of Nicola Tesla, the man who created alternating current, radio, X-rays, and a machine that could move electricity through the air without wires.

Thomas Edison had better publicity, but I think Tesla was the true mad genius of his day. His crazy, creative drive helped to build America. Read a bit about him and you'll understand what I mean.

There was a time in America when people invented things, and made things, and took chances, and had laboratories and foundries and manufactories in the crazy quilt of these crowded, teaming neighborhoods, and all of this was normal in that America.

Gillis & Geoghegan used a lot of oil in the manufacturing of their steam-heating equipment, and that oil saturated their new place at 35 South Fifth Avenue. At three o'clock in the morning on March 13, 1895, Night Watchman Maloney was making his rounds when he spotted a fire coming from G&G's portion of the building. He ran and got pails of water to douse the flames, but it was no use. The violent blaze, fed by the oil, was so intense that it set fire to the elevated railroad tracks out there in the street. The fire spread upward and outward, and thoroughly consumed the laboratory of Nicola Tesla, taking with it half of the man's inventions, his research, and his hope.

Tesla arrived the next morning at 10 AM and paced up and down the street. The story made the newspapers. He told the firemen that he had no insurance. He said that all was lost. Everything. Gone forever.

Nicola Tesla was never the same again. He died all alone. They found his body on January 7, 1943 in his room at The New Yorker Hotel on Eighth Avenue and 34th Street, a place that ran on direct current.

The New Yorker Hotel had coal-fired steam boilers and generators deep in its basement. In 1930, it was the largest power plant in the United States of America. It produced direct current, and it did so for the man who had invented alternating current. It did this until the late-'60s.

I thought about that for a good, long time.

John, Alex, and I have at least 11 more buildings to see on our Magical History Tour. The weather forecast calls for a good chance of fine food and wine, friendly barmaids, and, for sure, great chat.

I'll let you know how it goes.