Bryant Park serves as the backyard to the main New York City public library, and it is a jewel of a park. Twenty years ago, it was a place where you would go to be hit over the head and robbed, but New York City is now Disneyland North so there are no longer any worries.

Looking down from West 40th Street, is the 36-storey Bryant Park hotel, which is fronted with black brick, designed to look solid and massive, like hard coal. The crenelated roof of this gorgeous, landmarked building is made of gold bricks, which simulates fire. This is the old American Radiator Building, and it stands as a monument to the once-great promise of hydronic heating in America. The sprawling main floor was once a showroom for radiators and boilers. Imagine that.

Then the Japanese bought the building and kept it vacant for years. That was sad to watch. Then, in 1998, after a small carousel and great lawn replaced the lead pipes and other bludgeons in Bryant Park, a developer bought the building and turned it into this crazy-expensive hotel. There’s a small, bronze plaque near the front door that feebly whispers what once was. Few stop to read it.

John Bartlett Pierce was born in Emden, Maine, about 65 miles west of Bangor. It gets very cold there. He was born on June 2, 1843 into two of the state’s oldest families. They had money so he attended Westbrook Seminary, survived the Civil War, and went to work, at age 25, as a clerk in a New Hampshire hardware store. Five years later, he moved to Buffalo, NY and opened a hardware store, where he began to dabble in the installation of steam- and hot-water boilers and radiators, a very new business at the time.

In 1880, he built a small factory in Buffalo, where he made steel boilers. In 1882, he opened a second factory, this one in Westfield, MA, where he made cast-iron radiators. He and other such hydronic pioneers did so well with these boilers and radiators that they decided to merge their efforts into the American Radiator Company. John Bartlett Pierce was the first Vice-President of that grand American conglomerate, and he remained a Director until he died in 1917.

A few years ago, when I was entering the semi-finals of life, someone told me that every carousel has a lead horse, and that you can always find it if you look carefully for the horse with the blue ribbons or the floral wreaths or something else that’s different from the others. Something special. This news astonished me at the time and has delighted me ever since. There truly is a lead horse on every carousel and my only regret is that I didn’t have this knowledge when our four daughters were children. It’s good to have grandchildren.

I was sitting in Bryant Park, watching the parents putting their kids on that tiny gem of a carousel and I mentioned to some of them about the lead house. It’s the white one over there. You can’t miss it. The parents and the children were as delighted as I was. As the kids rode, I told some of the moms and dads about the American Radiator building, which is right there across the street. I explained about the gold bricks on the crenelated roof, and the black bricks on the front, and how they represent fire and coal, massiveness and stability. “Oh, really?” they’d say, and then turn away as quickly as possible.

The American Radiator Company was the lead horse in the hydronic heating business for decades. They were instrumental in researching and engineering so many of the things we today take for granted. I can’t pass that building without remembering all of this. They changed America.

In his will, John Bartlett Pierce left a million dollars in company stock to 400 of his employees who had “demonstrated keen business ability, combined with a fine sense of honor, a high quality of integrity, and a conscientious and loyal devotion to the performance of duty.” The residue of his estate, which was considerable, established the John B. Pierce Foundation, “whose object shall be the promotion of research, educational, technical or scientific work in the general field of heating, ventilation and sanitation, for the increase of knowledge to the end that the general hygiene and comfort of human beings and their habitations may be advanced.”

Isn’t that wonderful? The author of the Pierce Memorial brochure wrote, “Within a decade we shall all better appreciate the vision and scope of this remarkable, affectionately conceived plan of Mr. Pierce’s for the broad and general advancement of the whole heating and ventilating industry.”

Isn’t that great? There exists today this huge fund, established nearly 100 years ago to research better ways to heat, ventilate and plumb buildings. So if we ever wanted to, say, figure out whether a building with a radiant hydronic heating system provides more comfort than, say, a building heated with a furnace, we should be able to go to the John B. Pierce Foundation and get the money to do that research.

Isn’t that fabulous? I got so excited when I learned about this that I went scrambling after the Foundation. Hey, I’ve sat through enough blah, blah, blah at association meetings where someone always stands up and cries the blues about the research we could be doing, if only we had the money. Blah, blah, blah.

So I went looking for it and found it. As you can see from their Web site, their Mission Statement is, “To conduct basic research on the interactions between physiological systems and the stresses imposed by the modern environment, with the goal of optimizing these interactions to improve human health and comfort.”

Isn’t that grand? It’s sort of what the late, great John Bartlett Pierce said, don’t you think? He wanted the money to go toward research, educational, technical or scientific work in the general field of heating, ventilation and sanitation, for the increase of knowledge to the end that the general hygiene and comfort of human beings and their habitations may be advanced. Yummy!

So click through the site and learn what they do. The Foundation is located at Yale University and they are currently doing research in the following areas: affective sensory neuroscience, cellular neurophysiology, exercise and metabolic physiology, integrated environmental physiology, oral and cutaneous sensitivity, executive and motivational control, neural coding and multimodal integration of flavor, neurobiology of feeding, respiratory and sleep physiology, and sensory information processing.

See any boilers or radiators in there? How about ventilation or sanitary systems? Comfort and hygiene?

At its start, the Pierce Foundation provided the funding for the Bureau of Research of the American Society of Heating and Ventilating Engineers (which became ASHRAE). Somewhere along the way, the money got away from ASHRAE. It’s out there doing what I suppose is very noble work, but I wonder what Mr. Pierce would have thought of all of this.

He was this kid from Maine who worked in a hardware store and fell in love with hydronic heating. He went on to build a tall building in New York City that looks like a coal fire. There’s a tiny carousel across the street, closed now for winter. 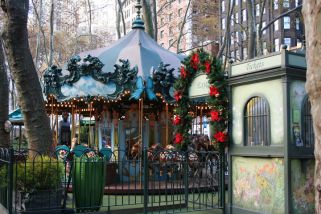 And there are also thousands of big buildings with cracked-open windows filled with uncomfortable people just nearby.

I think Mr. Pierce would have liked to see that money stay in the hydronic world but he died, and so, apparently, did his dream.

Think about that the next time you listen to someone cry the blues over how we don’t have the money to do basic, unbiased research into the science of hydronic heating. Because we once did.

But that money got mugged.