The need to manage water The power of water.

This story is not so much about buildings, but about respect for Mother Nature and all her powers.

Few of us ever have the chance to see the connections between different natural systems or experience our effect on nature or nature’s effect on us. A few learn dramatically and with great loss. The few lucky ones, like my son and I and the people we were hiking with, have a chance to understand and get through the experience with no long-term issues, just awe and respect, and new-found awareness.

We left on a rainy morning in June to hike another Adirondack high peak, Mount Haystack. Hiking in the wet is no big deal and the temperature was perfect. Not too muggy, no black flies, all in all very nice, though…wet.

As we rounded a corner to hike up to the slight depression before heading up Little Haystack (you have to go over Little Haystack and then down a bit to get up to Mount Haystack) we realized we were hiking up a waterfall. Seriously – a waterfall. The trail is usually the lowest part of the mountainside, as it is often worn down, and water migrates (in this case dramatically) to the trail. As the trail got steeper, the water ran with more force and the rain added volume. My son and I turned back about a mile from the peak. So close, but it was too much for us to continue.

That is not the story. The story is the 5.5 mile hike back to John Brooks Lodge (JBL) and what we saw. The first stream crossing we came to, after Slant Rock, stunned us. We had easily crossed with dry feet by hopping rock by rock earlier this same day. All the rain had aggregated into the stream, which seemed now unpassable, and we had to cross it. With much trepidation, our compatriot, John, crossed the too-deep water with a rope and tied it off to bank-side trees so my son and I could use it to stabilize our shorter and smaller bodies in the crossing. We made it, shaking.

We crossed two other small streams with caution, and then arrived at Johns Brook, which we had to cross to get back to JBL situated about 1.5 miles downriver on the other side. No way. The river was nearly three feet deeper than it was a mere five hours earlier. We were forced to bushwack (go through the woods with no trail) for 1.5 miles on the wrong side of the river to reach a trail that would eventually bring us to a high water bridge below JBL. This took us 3.5 hours. 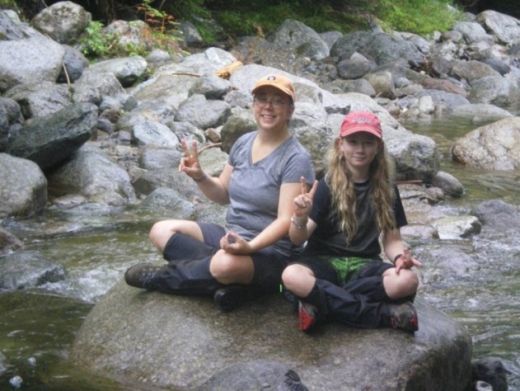 My son, Erik, and I, are posing for a relaxed photo at mid-morning on John’s Brook. 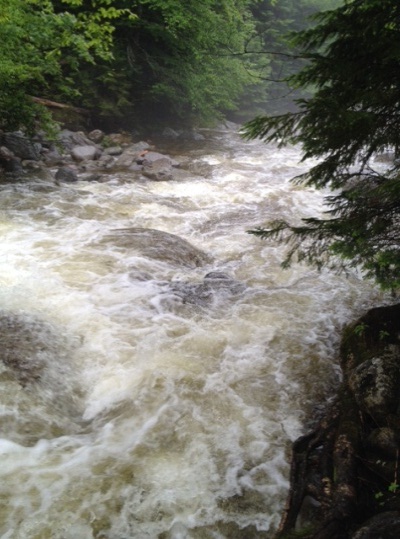 That slight bulge is the same rock we were sitting on, about five hours later.

That is what happens when water flows. It has speed and power and will make its own paths when needed, and grow and grow in volume as it runs down. We don’t treat water in our cities and suburbs with respect. We contain it and we direct it, and it does NOT like it. Putting it into a pipe in the ground and flowing it to a bigger pipe, and a bigger one, eventually to dump into a treatment plant is a recipe for disaster. Disaster we have seen in Upstate NY, especially with Irene, by building tightly to seemingly passive streams and rivers, and by watching manhole covers erupt in our asphalt-covered cities. Water is fierce. Water is not going to pay attention to you, Insignificant Human (nothing personal).

So, I am recommitting to Green Infrastructure (GI) efforts, efforts that include green roofs, inverted berming, rain gardens, pervious paving and bioswales. Green building is not, norhas it ever been, just about energy-use reductions. It is about doing smart, long-lasting things that are durable, flexible, cost-effective, and that create no new problems. Impervious surfaces leading to pipes underground very often create new problems, even in the best scenario: problems of storage, treatment, discharge and maintenance. In the worst scenario: flooding, destruction, danger, and untreated waste.

Let’s engage Mother Nature and work with her to filter the water through her own soils instead of running it into faster, bigger and costly man-made avenues. Let’s NOT spend money or power pumping and treating unless we have to! Let’s recharge and renew, revitalize and reconnect the systems that were working perfectly well before we starting interfering with our hard surfaces and restricting pipes. We may need to invest in some more cleverness, but we will certainly find less-expensive and more-effective ways to let our mother help us out.

Learn from your experiences,