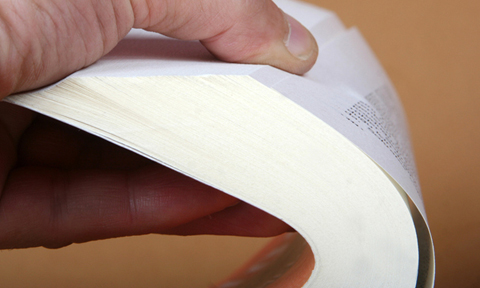 It was the spike in the cost of paper that eventually led to Bailey’s Great Experiment. The printer blamed the 50 percent increase on El Niño and lousy weather in the Pacific Northwest, or some such crap. Bailey thought the printer was a stinking thief, but he couldn’t get relief from any other printer in the United States of America because those bums had a trade association. “They plan this,” he mumbled at the invoice. “They get together in big rooms at their conventions and plan this.”

Bailey was the president of Bailey Boilers. He was getting his brains kicked in by a dozen competitors, two unions, a nagging wife, three ungrateful kids, and this stinking printing company. The only one he thought he might be able to get back at was the printer. He initialed the invoice for the 5,000 installation-and-operation manuals and tossed it in the “Hold for as long as possible” bin. His bookkeeper would now pay that invoice when the printer’s lawyers showed up with the sheriff and a warrant for Bailey’s arrest, but not a day sooner. “Gosh, I’m so sorry for the delay,” Bailey would tell the printer when that day arrived. “It’s that El Niño, you know? It really slows things down at this time of the year. We sell fewer boilers because it just doesn’t get that cold anymore. What can you do?” Bailey would shrug his shoulders and look exasperated.

The thing that got to Bailey most about the printing bills was that he was starting to believe that no contractor had ever read the expensive installation-and-operation manual he included with each boiler. He suspected that contractors used the manuals to prop open basement windows and light gas pilots. He suspected this because the engineer he had hired to write the thing spoke only Martian. Bailey himself couldn’t understand what the heck the guy was saying most of the time. And to make matters worse, when the engineer had finished writing that manual a few years back he had passed it on to the Legal Department. Those people spoke the language of the planet Uranus. Bailey was positive that the installation-and-operation manual was both technically and legally correct, but it was also incomprehensible. And it was thick – 542 pages! There was even a clause in there stating that if any contractor should trip over the manual and get hurt, Bailey Boilers could not be held liable for damages.

“You think we have to keep publishing this thing?” Bailey asked Schtunk, his marketing manager.

“But I don’t think a single one of our customers has ever read this thing.” Bailey hefted the volume and dropped it with a Whomp! onto the top of his desk. “Do you seriously think anybody reads that thing? I can’t understand it and I own the company. Can you understand it?”

Schtunk looked at the tome and shook his head. “No. I’m Marketing, not Engineering. I’ve never even tried to read it. Marketing people don’t have to be technical. I have no idea if our customers read it. But we do have to furnish one with the boiler. I know that for sure.”

“But isn’t it a function of Marketing to learn what our customers want?” Bailey persisted.

“No,” Schtunk said. “That would be Research. And we outsource that sort of work. I can have that done, if that’s what you’d like, Mr. Bailey.”

Bailey took off his glasses and rubbed his eyes. “No,” he sighed, “the last thing I need right now is more expense.” He looked down at the volume and nudged it with his index finger. It barely moved. “Why are we printing this?” Bailey asked rhetorically. “Do you have any idea what it costs to print this stuff nowadays?”

“You really think we need to print it if no one reads it?” Bailey asked again.

“Why?” Bailey asked, yearning to know.

Schtunk opened his eyes wide, as if he was about to reveal one of the Great Truths. “Because our competitors print them,” he said.

“Are theirs any better than ours?” Bailey asked. “Does anyone read theirs?”

“Again,” Schtunk said, “that would be Engineering and/or Research. Would you like me to look into it?” Schtunk gave Bailey one of those flashy, Marketing Guy smiles. Bailey shook his head, rubbed his eyes again, and sighed.

It was later that same day that Bailey came up with the idea for his Great Experiment. He took a ride down to Sir Speedy, which was the cheapest and quickest printer he could find, and had the guy behind the counter make up 50 index cards containing the following message:

If you find this card, please call our toll-free number and ask for Mr. Bailey. You will receive a prize.

He figured he’d go out onto the factory floor and slip these 50 cards into the next 50 installation-and-operation manuals that went out with the next 50 Bailey Boilers. If anyone opened the manual, the card would fall out. When they called Bailey for the prize, he would send them a ballpoint pen with the company’s logo. That would be his way of saying thanks for their participation in his Great Experiment. It would also let him know if anyone ever peeked inside the massive and way-too-expensive manuals.

Several weeks passed but no one called for a ballpoint pen. Bailey began to suspect the worst. He wandered by Technical Support one afternoon. The five Tech Support people were busy on the phones, answering hundreds of contractor questions. Bailey knew that everything the contractors needed to know was contained in the thick installation-and-operating manual, but the contractors called nevertheless. “They don’t read,” Bailey mumbled to himself. “I just know it!”

He walked back to his office. His bookkeeper handed him a message from the anxious printer. “He’s still looking for payment,” she said. “Do you want him to stay in the When Pigs Fly bin?”

“Yes, and explain to him that there’s an unexpected cold front on the way with possible thunderstorms predicted. Highly unusual for this time of the year, but with El Niño you can never tell. We can’t possibly pay bills when there’s a thunderstorm in the area. It wouldn’t be safe.” Bailey shrugged his shoulders. “Explain to him that it’s quite warm in the Pacific right now. He’ll understand.”

Bailey took another ride down to Sir Speedy at lunchtime. “Print me up another 50 index cards,” he said.

“You want the same message as the last time?” the guy behind the counter asked.

“No. This time have it read this way.” Bailey handed the guy a piece of paper. Later that day he picked up the cards. This was the message he had chosen:

If you call this special toll-free number right now, I will give you $50 and a case of cold beer.

“This ought to do it,” Bailey said to himself as he slipped the cards into the manuals. “No contractor in America can refuse free money and beer.”

Two weeks later, Bailey had Schtunk back in his office. “No one’s reading our manuals,” Bailey declared.

“How can you tell?” Schtunk asked.

“I’ve been doing some experimenting on my own,” Bailey said, and then he told Schtunk about his Great Experiment. Schtunk squirmed in his seat because he thought the Great Experiment came uncomfortably close to Marketing, which is what Schtunk was supposed to be doing. Sure, it might be considered Research in some circles, but when you start giving away free beer and money, well, that’s Marketing. Schtunk was worried that he was going to get downsized if he didn’t do something – and fast!

“I can look into this a bit deeper if you’d like,” Schtunk said. “Just to be positive.”

“I sure wish you would,” Bailey said. “I think that’s part of what you’re supposed to be doing, isn’t it?”

“I’ll take care of it, Mr. Bailey,” Schtunk said, leaping from the leather chair and scurrying out of the office.

12 TICKETS TO THE SUPER BOWL,

YOUR VERY OWN BEER DISTRIBUTORSHIP,

AND A HOT DATE WITH MISS JULY!

THERE IS NO LIMIT TO THE NUMBER OF CONTRACTORS WHO CAN PARTICIPATE IN THIS GREAT EXPERIMENT.

AND THERE IS NO PURCHASE NECESSARY.

GET TO THE PHONE NOW!

“This will prove, beyond a shadow of a doubt, that no one in the world reads our installation-and-operation manuals,” Schtunk said to the Kinko’s guy. “Mr. Bailey is going to be so proud of me!”

Three weeks later, Benny Steinberg of Brooklyn, New York dropped a Bailey Boiler off the tines of his forklift truck at the wholesale house where he had worked for 22 years. “Oops!” he said. The boiler crashed down into the loading bay and split into pieces. A thick book flew from the rubble and a neon-red handbill fluttered onto the greasy pavement.

A few minutes later, Benny Steinberg walked into the counter area where there were no less than a dozen burly, New York City contractors waiting for supplies. “Fellas,” Benny Steinberg said, “I am about to make you all very, very happy.”

If you enjoyed this story, you'll love The Contractor Stories by Dan Holohan.