Last January, I was at the big AHR show in Dallas, where I got to share the seminar stage with John Siegenthaler. John writes for many of the BNP Media magazines and he always has something interesting to say about things hydronic.

As he was wrapping up his talk, he showed a series of PowerPoint slides to make a few final points. One was a photo of a row of installed ball valves with the caption, Plan Ahead. The fun part of the photo was that the contractor had approached the row of valves (and very tightly) from above. He had also removed the valve handles while he was soldering. When he went to reinstall the handles he learned that the vertical pipes were in the way and that none of this was going to work.

Let’s pause here for a moment so we can both enjoy the befuddled look on his face.

And now he smacks himself on the forehead.

Okay, so what next? He’s not going to start all over again, right? Of course not. He has other fish to fry. This calls for a creative solution. Hmm. What to do?

I got it! What if I were to put the valve handles in a vice and bend them in the middle so that they point straight up. That will clear the pipes, and if you’re strong enough, you should be able to still open and close the valves. I’m not going to be here much longer anyway. Yeah, that’s the ticket!

It made for a spectacular photo.

On the steamy side of life, let’s talk water hammer. This is an annoying (and marvelously destructive) condition that happens when steam, moving at Interstate Highway speeds, picks up a slug of water that made its way into a horizontal pipes and then launches that water toward the first available elbow, where it hits with more force than a Mike Tyson left hook. It can (and often does) pull the pipe right out of the fitting.

Water hammer needs a horizontal pipe to happen. It won’t happen in a vertical pipe because water falls by gravity into the wet return. The steam can’t shove it any further than that so you don’t get the pounding or the violence.

If a wet-return line clogs, water that’s trying to return by gravity to the boiler will back up into the ends of the steam main. It takes a while for that to happen, but when Mr. Steam finally catches up with Mr. Water in that horizontal pipe it’s Show Time! The cool part about this is that it will occur near the end of the heating cycle. See how paying attention to the timing of all of this helps the troubleshooter?

There are other causes, of course. If the near-boiler piping isn’t right, the steam will carry lots of water out into the system, leading to water hammer. The same thing happens if the installer oversizes or overfires the boiler. Too much steam leaving the boiler can suck the water right out of the boiler and the anvil chorus begins once again and usually in the middle of the cycle.

And the list of causes goes on, but it’s all simple physics and a good checklist is all a heating professional needs to solve the problem. But some installers think more like plumbers than like heating professionals and this is often where the fun starts.

Plumbing is different from heating, even though both trades involve pipes, valves and fittings. Plumbing systems can also suffer from water hammer but it’s a different type of water hammer. You can hear (and feel it) when a valve closes quickly against moving water. The incompressible water hits the wall and goes BANG! You get to watch the pipes shake and you get to worry.

But now let’s put a creative plumber on a steam system that’s hammering. The plumber I have in mind will try to solve the water hammer by installing what he thinks is a water-hammer shock arrestor on the riser between the steam boiler and the steam header. This won’t work, but the plumber’s attempt is delicious.

And since this is a large steam system, and our hero is concerned that a relatively small water-hammer arrestor, such as he might use on a washing machine, won’t get the job done, he installs a diaphragm-type compression tank (yes, the sort you use on a hot-water-heating system) instead. He pipes it right into the steam riser to the header. A diaphragm tank isn’t a water-hammer arrestor, but it’s close enough in appearance to give one hope, even if only for a brief time.

You can’t make this stuff up.

And by the way, when it doesn’t work, he complains about the quality of the compression tanks these days. Cheap crap.

On Long Island, we have lots of steam systems and hot-water systems and people are forever adding extensions to their homes. So picture this: We have a small house, built in the ‘30s. It has one-pipe steam. The back door opens onto a small yard and there’s a three-step, concrete stoop off that door. The people decide to have a family room built off the back of the house, which has now put that concrete stoop inside the crawlspace that’s under the new family room.

With me so far? Good.

Okay, they hire a contractor to do the work and he hires someone to do the heating. Since the house already has one-pipe steam, whoever is doing the heat for the addition figures this is going to be a snap. All he has to do is tap into the closest steam main in the basement and run a new line out to this large cast-iron radiator over there on the back wall of the new addition.

So that’s what he does. And thinking like a true craftsman, he makes sure this new line, which runs about 25 feet, is as level as the horizon. Neatness counts.

The problem with that, of course, is that water flows downhill only, and in a one-pipe steam system, the water has to flow against the onrushing steam, which is heading in the opposite direction. Without pitch, the water just lays in the pipe, waiting for Mr. Steam.

Oh, and there’s no insulation on that new pipe, even though it’s running through a frigid, uninsulated crawlspace. So we get a lot of condensate on start-up. And since the water has nowhere else to go but up, it does just that. Sit in the new family room and you can watch water squirt from the radiator’s air vent and bounce off the ceiling.

So what’s a creative person to do?

Okay, here’s what you do: Get an empty Pepsi bottle and cut a hole in its side. Make the hole just large enough so that the radiator’s air vent can fit through it and be forevermore inside the bottle. Make sure the mouth of the bottle points downward. 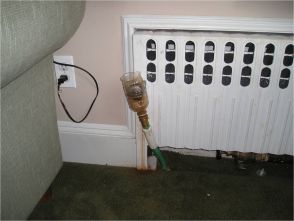 Okay, now get a garden hose and duct-tape one end of it to the mouth of the Pepsi bottle. The splashing water needs a place to go, other than onto the ceiling and this takes care of that.

Drill a hole in the floor, just in front of the radiator. Make sure the hole is wide enough to allow the garden hose to pass though.

Next, get down in the crawlspace. That’s where you will find the rest of the 50-foot-long garden hose. Bring some twine so you can tie the hose to those two-by-fours you laid across the ground. Aim all of this back toward the old concrete, back-door stoop. 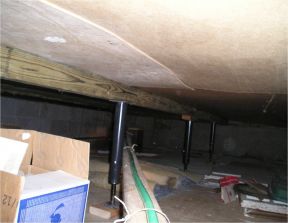 Now bore a hole in the concrete stoop and pass the garden hose though that hole and into the basement. 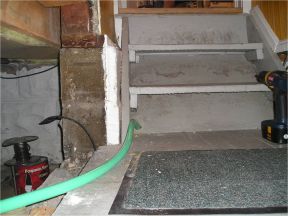 Finally, go to the basement and put the other end of that hose into that slop sink over there.

Problem solved! And in a most creative way.

Aren’t you glad I shared all of this? You won’t find it in the textbooks.