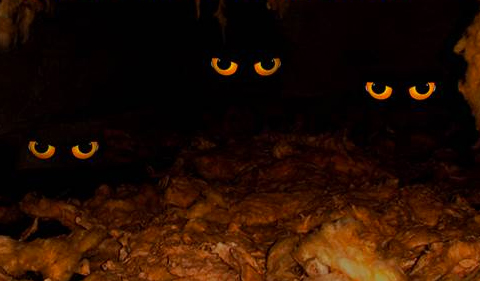 October, being the month for ghosts and goblins, seems like the perfect time to reminisce about those tight spots few want to visit, but many must. It’s just the nature of the business, and what could be spookier than a dank, dark crawl space?

I asked some contractor friends about the creepiest places they’ve ever had to crawl though while looking for things that leak or go bump in the night. Here’s some of what they told me.

“I ran into a nest of copperheads face to face while installing radiator piping in a 350-year-old Dutch home in Kingston, NY,” one of the guys said. “I set a new record for reverse-gear to get out of there. I got the helper to finish the work. He wasn't afraid of snakes. I didn't enter another crawlspace for 10 years after that one.”

How’s that for a great helper? Hey young fella, how about you crawl in there with those copperheads? That be okay with you?

And in he goes.

I once stapled-up a lot of rubber radiant hose that Heatway used to make. It all went under the den of Al Levi’s old house on Long Island. I was writing a book I called Hydronic Radiant Heating at the time and I thought I could do a better job of telling what it’s all about if I actually did some of it myself. So I suggested to Al that his den, which was exposed on five sides and chilly, needed warm floors. Al agreed and before long, I was under the den with a tech who knew how to operate a big drill in a tight spot without killing either of us. Al crouched at the entrance of the crawl space and laughed as I moaned for most of the day. “So what do you think, Dan?” he said. “Having fun yet? Learning anything?”

Having that experience with my dear friend made me realize, once again, that writing about all of this is a lot easier than actually doing it. Thank you very much.

Al’s crawl space had rough concrete, which was tough on my back, but I shouldn’t complain about that, especially since another of my contractor friends told me about how he was dragging pre-insulated underground piping through the crawl space of a shady motel when he was much younger. “There was everything from condoms, to syringes, to animal carcasses in varying stages of decay down there,” he said. “And spiders! I hate spiders. Fifteen years later, I’m still having nightmares about that place. SPIDERS!”

Another pro told me this one.

“Three years ago, my helper and I had to repair some condensate leaks on an old steam system. This crawl space was all dirt up to about 18" below the floor joists. Oh, and there were the usual rocks, nails, wiring, and broken light bulbs all over the place. You sort of expect that. In this one, there were ditches that were three-feet deep and that’s where the condensate returns were. The problem was the ditches were not wide enough to work in. We had to crawl in about 40 feet before we found the leak. Then we had to back out the same 40 feet because there was no room to turn around. The leaking steam and the dust we kicked up crawling around down there sure made it hard to breathe. We ended up pulling up a part of the floor to get access to the leak. I don’t know how we would have fixed it otherwise.”

A friend from Alaska said, “I have been in a lot of crawl spaces where I had to take the notepad and pen out of my shirt pocket to squeeze in. You get pretty good at using your toes to pull yourself back out. Around here, there are not many spiders other than daddy long legs. I was working on a broken pipe under a mobile home where there was the usual insulation hanging down in my face. There was also plenty of garbage and it was wet everywhere I looked.

“So, I’m lying on my back, with just a foot of clearance to my face. I turn on my flashlight, and there are about 50 daddy long legs right above my eyes. They got really agitated when I fired up your torch to fix the leak. I’ve learned that it best to just roll your lips in and just get it done when Daddy long legs are around. They’re one of the most poisonous spiders there are but their teeth are too short to bite humans. That’s a small blessing; but I’ll tell you this. They sure do smell musty.”

Speaking of spiders, how about this one from my buddy in California.

“Long ago, I was running wiring in a tight crawl space with a friend. It was so tight there wasn't even room to turn over. My friend had a spider walking across his face and he couldn't get his hand near it. So he just swallowed it. He said it was crunchy.”

And how about this one from another friend?

“There was a crawl space under a large commercial kitchen. The largest of four grease traps was leaking. It recessed through the floor and into the crawl space. This thing was so big that six men could stand-side-by side next to it and there would still be room to spare. There was so much piping in the way down there that we couldn’t get to the thing. The crawl’s floor pitched from two feet to about four feet, and there was no easy access. It was also dark in there and it smelled like death. I was never claustrophobic up until then. That was my last time in a crawl space.”

Got enough Halloween yet?

Okay, listen to this guy.

“My first real nasty experience was the crawl space at Smith Houses, down by the Brooklyn Bridge. A maintenance man from Emergency Services caused this one on a Sunday night. Rather than clearing a stoppage on a back-to-back toilet riser, he knocked out the cleanout plug in the soil stack. That caused 32 toilets and bathtubs to empty their waste into the crawl space. Housing assigned my helper and me to clear the stoppage.

“That crawl was three feet high at the entry point and it had a foot of water filthy everywhere. My first move was to shut the water supply to 128 apartments. I then pumped the waste water out of the crawl space. We got it down to about six inches and proceeded to bring in the sewer cleaning cables. All the lights down there had burned out, so we went in with flashlights to change the bulbs. Then we started rodding the stopped-up lateral line from the stack. We brought in a fire hose from the standpipe to blow out the lateral line. Then we found that there was another stoppage on the house drain.

“At that point, I decided to find the house trap and remove the clean-out plug from the sewer side of the house trap. Once I did that, all of the water eventually drained from the crawl space.

“Oh, and along the way, we found many dead rats, cat poop, and the lime others had used over the years trying to sterilize that crawl space. You can imagine what I looked like after that one.”

And some think Halloween is scary. Pfft.