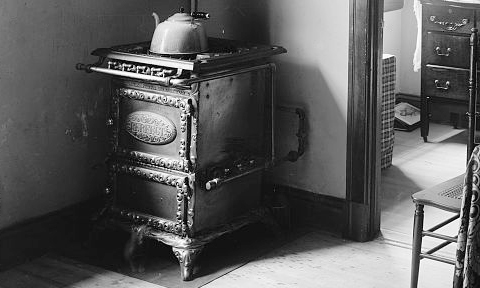 I got a call from a guy who was buying his first house, and this place has steam heat. He found me on the Internet.

"I think it will be safe as long as a heating professional looks it over and blesses it," I told him.

"No, I mean the pipes," he went on. "We have small kids and I'm concerned that they may touch the pipes and get burned. Did you have steam heat when you were growing up?"

"Did you ever touch the pipes and get burned?" he asked.

I went on to explain that after I managed to raise a blister the size of a water balloon on my little hand, my mother consoled me by whacking me on my butt and telling me never to touch the hot pipe again. Believe me, I didn't.

Well, at least not until I got into the business. Then I touched a lot of hot pipes - never intentionally, but you know what I'm talking about. You touch that pipe, scream, and then wonder why you did that. At least Mom doesn't whack me anymore.

This got me thinking about the place where I grew up. We lived in a five-story Manhattan tenement with no elevator. It had one-pipe steam, of course. We kept a pan of water on top of the radiator to add humidity to the air. The radiators made a raucous banging whenever the steam came up. If there wasn't enough heat, my mother would bang on the riser with the metal spaghetti sauce ladle to get the super's attention. Oh yes, and water dripped dangerously from the air vent on most days. I'd lie on the floor and watch it. We considered all of this to be normal, and I was quite delighted with the whole violent workings of the thing.

In 1957, we moved from Manhattan to a little house in Hicksville, Long Island, where we had hot water heat instead of steam. It was a system with diverter tees and it made a lot of gurgling sounds until my father added a few fittings that he got from the supply house where he worked. We all called the hot water heating system, "the steam," as in, "Eddie, could you turn up the steam? It's chilly in here."

Eddie, who was my father, would do that for my mother and they were both delighted to have such control over their level of comfort. "You know, kid, you’re lucky," my father would say, "When I was your age my father would make me go down into that dark cellar to get some coal. I'd practically crap my pants worrying about the rats. And during the Great Depression, all of us kids would follow the coal man's wagon and pick up the loose pieces that fell off the back whenever the horse would start up. The coal man would swing his whip at us, but that's what we did back then. I hated having to go down that cellar. You're lucky, kid."

This was my father. If you're over 50, your father probably told you similar stories. Central heating, as we know it now, is all pretty new. Most of it arrived within my generation.

"And we had a stove in the kitchen in those days," my father would say. "Your grandmother would make the fire in the morning and cook us oatmeal before she sent us to school. We sat around that stove because you could see your breath if you were in the bedroom. I used to scrape the ice off the windows with my fingernail. And we took baths on Saturday night in the kitchen sink, which was also a tub. And if we had to take a crap, we had to go out in the hall toilet. Old Man Hogan was usually in there sleeping off a drunk because Mrs. Hogan wouldn’t let him in when he was drunk, which was most of the time.” And then my father would laugh until tears filled his eyes. "Those were some times," he'd say.

This was just a generation ago.

I have many old engineering books. The Dead Men wrote about radiators during a time when most buildings didn't have radiators. While these Dead Men wrote, Henry Ford was turning out cars by mass production, Albert Einstein had his Theory of Relativity in place, and Wilber and Orville Wright were flying through the air. It seems that we, as a people, saved the concept of central heating and creature comfort for one of the last things we would get around to in this modern age.

My mother and father had a coal stove.

I had steam heat.

But look at how far we've come. Suddenly, we have these magnificent systems that keep us warm in the winter and cool in the summer, and they do it so efficiently. We get together at conventions and seminars and wonder aloud why the public isn't beating a path to our doors and begging us to give them the best of what we have to offer.

I think the reason they’re not clamoring for it is because most of this is so new. Most people aren’t aware of what's available. Let's face it; it's all pretty new to us too. It's only within my generation that people have come to expect their homes to be heated or cooled. My parents had coal stoves.

And my generation grew up and learned our lessons from some great "professors" who grew up during the time of the coal stove and the steam radiator. Most of what is new, however, we learned on our own because there is no central repository of knowledge in this industry. There is no place where you can go to learn it all. There is no College of Heating Technology.

We've gone far beyond protecting the health of the nation. We now also provide the nation with comfort, and when we do our jobs well, people don’t even know we were there. And that’s a challenge for our generation and for the next generation as well. Our work whispers; it doesn’t shout. It touches with a gentle hand. It doesn’t grab people and force them to notice. And because of this, people will take us for granted if we’re not careful. They won’t see the value of our services.

But this can only happen if we forget to constantly remind the public of how it once was, and not that long ago. When you’re with your clients, please remind them of how very good things are now, and how our industry’s combined skills and talents have made it so.

Lest they should forget.