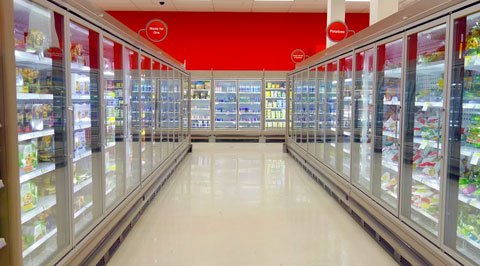 I like my coffee black. The Lovely Marianne takes hers with skim milk, no sugar. We were away for a few days last summer, and the morning after we returned, I checked the milk in the fridge to see how it had fared during our absence. I unscrewed the cap, stuck my proboscis into the hole, sniffed deeply, and then made that face. You know that face?

“We need milk,” I said to my tiny bride.

The lady is crazy about me, even after decades of marriage.

I drove over to the food store, parked, dodged the homicidal drivers in the parking lot, and made my way toward the skim milk. If all went well, I would be back home in no time at all and The Lovely Marianne would be pleasantly caffeinated.

I was looking for the correct milk with the proper date when a woman about my age, who was shopping for yogurt, whined to her daughter that she was freezing. They were wearing shorts, tee shirts and flip-flops – the summer uniform of Long Island.

“How cold do you think it is right here?” I asked. They looked at me, and then at their purses, and then at the yogurt. And I’m a friendly guy, not at all scary. No piercings or facial tattoos.

“Feels like about sixty, doesn’t it?” I said, because sometimes I just can’t stop myself. I am of an age.

“I’ll bet it’s a lot warmer than that right here,” I said.

We never stop being classy here on the Isle of Long.

“Where you going next?” I asked. “I have to go get a thermometer. I’ll catch up.”

Marie gave me a look that could grind glass. Mama said, “Cereal aisle. I have to get my raisin bran. It keeps me regular, ya know?"

“C’mon, Marie.” Marie gave me that look. You know that look?

Anyway, I scurried over to the housewares aisle and picked up an electronic meat thermometer. It cost 12 bucks but I wasn’t going to buy it; I just needed it to check the temperature. I pushed the button and sure enough, it was seventy degrees. Next stop, raisin bran.

Mama and Marie were trying to decide between Post, which was on sale and the store brand, which was a few cents cheaper. I showed them the thermometer. “See?” I said. “It’s seventy degrees.”

“I’ll bet you it’s the same temperature back over there as it is here,” I said.

“Really,” I said. “I’ll bet you a dollar.” And what Long Island mother could resist that?

I kept my eye on the thermometer as we turned into the dairy aisle. It was pegged at 70. We stood in front of the yogurt for a few minutes, Mama, Marie and me, all of us watching the thermometer. “You owe me a dollar,” I said.

“Double or nothing in Frozen Foods,” Mama said.

“You’re on.” Hey, it was just one aisle over. No biggie. And the best part was the temperature of the air in that aisle was also 70 degrees. “Pay up,” I said. The Lovely Marianne was going to be so proud of me. Mama would be buying the skim today.

“Not so fast,” she said. “Let’s go again. There’s no friggin’ way the temperature by the roast chickens is seventy degrees.”

“You go to Atlantic City a lot, don’t you?” Mama smiled and nodded.

So we went to see the roasting chickens, turning languidly on their rotisserie. “I’m getting a hot flash,” Mama gasped.

I showed her the thermometer. “It’s seventy degrees. You lose,” I said.

“Did you know your body is a radiator?” I asked.

“You talking about my flashes?” Mama said.

“Ain’t that a Katie Perry song?”

“When we were in the dairy section and the frozen-food section, our bodies were giving up heat to the cold surfaces around us,” I went on about all of this because, well, that’s what I do. I have no life. “But the air was the same temperature as it is by the raisin bran. And now you’ll notice that just the opposite happens here by the chickens.”

“Let’s move. These chickens are killing me,” Mama said, so we headed down the magazine aisle. “Whew! That’s better.” She picked up a copy of People and fanned herself. “I can’t believe George Clooney got married.”

“Did you know that you felt warm by the chickens because the rotisserie acts like a heat lamp? The air doesn’t get any warmer, but we do. You feel cooler now, right?”

She was waving George Clooney and his bride like mad. “Yeah, much better now.”

“That’s because your body isn’t just a radiator; it’s also a fan-coil unit.”

“A fan-coil unit. Like a blower in a warehouse.”

“You lose about one quarter of your body heat when you fan yourself like that, even though the air temperature doesn’t change. Here, look.” I showed her the thermometer. Still 70 degrees.

“Who the hell are you, mister?” Marie said. “You some kind of Bill Nye the Science Guy, or something? Can we go, Ma?”

“Aspettare, Marie. This is getting interesting.”

“And you lose another quarter of your body’s heat through evaporation.”

“Well, when it’s cold outside, you can see your breath, right?” Mama nodded. “That’s evaporation. When water evaporates from us, we feel cooler. It’s like when we sweat.”

“What type of heating system do you have at home?” I asked.

“Honeywell,” Mama said. “I got one of those round heating systems. Goes on the wall. It’s beige. I twist it when I flash.”

“If you had hydronic radiant heating in your house you would never experience what heating engineers call Cold-70. The Mean Radiant Temperature all around you would be perfect and you and Marie would be in a state of pure bliss.”

“Oh my gawd, Marie! Bliss! We haven’t felt that since the day your father walked out. I could use some bliss.”

“You should call a good heating contractor,” I said.

“Let’s go, Ma. Really. You two are making me nervous.”

So I went home to The Lovely Marianne, anxious to tell her about my two new friends and the glories of Mean Radiant Temperature, yet again.

I got in the car and drove back to the store.