I have many old books in my office, and one of my favorites is a presentation booklet that The May Oil Burner Company put together in 1934. It was a Depression-era version of what today would be a spectacular Web site because it gave the salespeople a way to show the benefits of their products. And I do mean benefits.

They printed this booklet on high-quality paper (it still looks good after all these years). It contains 30 pages, measures 10-1/2 inches wide, and stands tall at 15-1/2 inches. Its title is, The Home of Heart's Desire, which, at first, may seem to have little to do with an oil burner, but wait; there's more.

I came across this treasure in an old book store in Portsmouth, New Hampshire years ago, and I take it down from the shelf every few months to remind myself of how important it is to talk about benefits more than features when presenting just about anything in life. We all want to know what's in it for us, right? Well, in the heating business, The May Oil Burner Company did that better than anyone, and I'm talking about both back then, and since.

They made a burner they called Quiet May, which did a nice job of naming one of its benefits. They did this during a time when just about everyone in America was burning coal. Oil was new in those days and the company had to make a good impression because people were so used to the routines of having coal. Folks thought all that coal dust and hard work of shoveling coal and carrying ash was normal. They needed some good reasons to spend money on a newfangled burner in the midst of the Great Depression. The May Oil Burner Company realized that, so instead of focusing on the features of their oil burner, they sold its benefits, and in a few years, hardly anyone was still burning coal. There's a wonderful lesson in the way the company did this. They focused on who their customers were, and they thought about what problems their customers were having. Then they presented their case in a way that addressed the customer's self-interest. They didn't sell an oil burner. They sold intangible things such as better health, a cleaner home, more time for mother, family togetherness, peace of mind, convenience and more living space.

That's what the Quiet May did. It's not what it was. And if you can understand that, you can do the same for your products or services, even when times are tough.

During the winter of 1918, the Spanish Influenza pandemic took the lives of 50 million people, many of them children. In 1934, when The May Burner Company printed their book about Quiet May, the flu was still on everyone's mind, so they allude to it on the first page. Below a photo of a mother, father and child, they write:

The effect of fluctuating temperature on family health and happiness is very marked. Colds and attendant respiratory troubles, due largely to varying house temperatures, are said to be responsible for at least one-third of a family's doctor bills. The cost in terms of reduced personal efficiency is incalcuable. Children, who do most of their playing on the floor, where temperature fluctuations are greatest, pay especially heavy penalties, very often with serious results.

Rarely is heat from a coal-fired furnace just right. Except, for short periods, when the temperature is on its way upward or downward, it is either too cold or too warm. Quiet May's automatic controls maintain an even temperature at all times. They never take a day off. They never forget.

Notice how the writer uses the words "fluctuating" and "fluctuations." Both contain the word "flu." Quiet May never forgets, and neither did anyone who lived though the Spanish Influenza.

With that said first, they next address cost - right up front where it belongs. Listen:

A Quiet May owner writes, "There are only two reasons why anyone would be without a Quiet May. Either they don't know its advantages, or else they are deluded with the idea that they can't afford it. It is our experience that the thrifty homeowner can't afford not to own it. Our budget book shows that Quiet May heat costs us very much less than coal heat. A friend of ours, who formerly heated with gas, now has a Quiet May and has cut his fuel bill in half without sacrificing a single thing that gas heat afforded."

It's not just coal they were after, but also gas. And they let their customer speak for them through this short testimonial. When a potential customer asks how much they will save on fuel with the equipment you're proposing, it's always best to let your customers speak for you. That's real world, and what was true then, is still true now.

You can't afford not to own this piece of equipment because it's going to save you fuel. You're going to pay one way or the other, but the choice is yours. You can either pay the fuel company month after month for fuel you don't really need to burn, or you can buy the Quiet May (or what you have to offer) and just pay for it once. When a customer realizes that (and it's always true), they'll agree with the Quiet May customer. You're deluded if you think you can't afford it. You're already paying for it by sending the money to the fuel company. Get it?

From there, they show a picture of a woman who looks just like Miss Crabtree in the Little Rascals. They speak to her directly because she was in charge of keeping the home fires burning.

It isn't very pleasant, is it, to have everything spick and span, then have to run down the cellar to give "old-man furnace" a much-needed poke, only to return with coal-besmudged hands and a trail of cellar-soiled footprints.

In "The Home of Heart's Desire," there's nothing like that to contend with! No coal or ash dust to seep up though the house. No coal dirt to ruin clothes, rugs, or drapes. No besmeared walls. No fire to build. No ashes to put out.

You'll have plenty of time to relax, do a bit of shopping, read a book, and romp with the kiddies. Getting up early in the morning to fire-up is now but reminiscent of other days. Up and down cellar steps throughout the day and dashing down the last thing at night to throw on the final quota is no longer in the scheme of things. Hours of unnecessary toil, together with the coal-consuming, ash-belching cellar demon, pass out the door when Quiet May comes in.

See? It's all about her.

The next page shows a picture of Miss Crabtree holding a two-year old boy by the thermostat. The kid is touching the thermostat. Imagine the appeal of that in those days. So simple a child can do it. And notice how we come full circle to the now-healthy children. You can't put a price on that, can you?

This was marketing at its best and this is what made our industry great. Quiet May shouts at us from over the decades and asks why we don't make our case on benefits, as they once did. That's what people want to hear. What's in it for them?

We stopped telling the customer-focused story in favor of babbling technical mumbo jumbo, and talking price, and all because we've come to believe that people today are somehow different today because we're in a recession. And yet, The May Oil Burner Company were able to sell the benefit of their burner during the depths of the Great Depression.

We need to think better.

I open my Newsday and see a full-page ad from a major oil company here on Long Island. It shows me a photo of an oil burner and it tells me that they have the Guaranteed Lowest Prices!

We have truly lost our way.

P.S. This is how Nest sells. 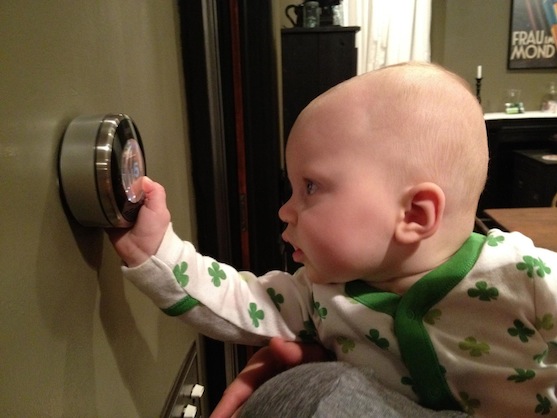