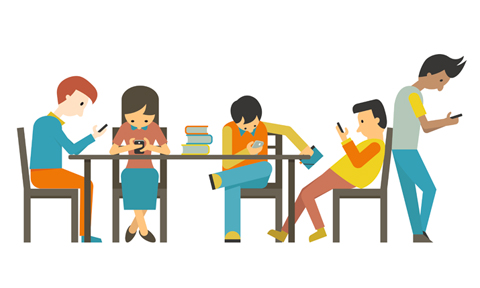 I’m concerned about what our phones are doing to the way we think and the way we work. I was having lunch with three industry friends and we talked about how it was back in the day when we depended on pay phones and paper maps. One of the guys, a former competitor, mentioned the South Bronx and how, back in the ‘70s, we would call on the same contractor. The contractor’s office was on the top floor of an otherwise deserted building. He had five locks on his door and we would have to step over people dozing on the stair landings on our way up.

“I didn’t know it was so dangerous at the time,” my friend said. “There was nothing in the Hagstrom Atlas that read, ‘Don’t go here!’”

“I used that same map,” I said. “What I remember best, though, was that it was always easy to park there. Not at all like Midtown Manhattan. In the South Bronx, my car was the only one on the block.”

Our lunch chat worked its way around to pay phones. My friend mentioned how sweet it was to be alone in the car with just the AM/FM radio. “My office left me alone during my drives to the contractors,” he said. “I had plenty of time to think and to prepare. I missed that when the beepers and then the cell phones showed up.”

“Remember the drive-up phones along the highway?” I said.

“Yeah,” he laughed. “The phone cords were always just a bit too short. You had to stick your head out the car window to make your call. It was tough in the rain.”

“Did you ever get one of the phones with the dog poop smeared all over the receiver?” I asked. “That surprised me the first time.”

“I got those all the time in Brooklyn,” he said. “I used to travel with baby wipes to clean them off so I could use them. You gotta admit, though. Those phones sure taught us to pay attention.”

I did many seminars before I retired in 2016 and I got to watch people’s addiction to cell phones as it grew. I’d be talking to a big group and a phone would ring. At first, I ignored it and kept talking. But as the years went by, it got worse, so I tried something different. Whenever a phone would ring, I would immediately stop talking and say, “I’m sorry. We have a call. Let’s just wait to see who it is. It’s probably very important. Otherwise, why would he be answering it during a seminar that he paid good money to attend? Let’s wait and see.” And then I’d stand there as still as a mannequin and unless the person on the phone was a world-class knucklehead, the call would quickly end and I would continue with the seminar. I usually didn’t have to do that more than twice during any one session. Often, the rest of the class would get on the guy and tell him to get off or get out. They, too, were paying to be there.

After I retired, I became very involved with The General Society of Mechanics and Tradesmen of the City of New York, founded in 1785 by a small group of craftsmen who wanted to look out for each other. In 1858, The Society opened our Mechanics Institute. We’ve been offering free two- and three-year trade education for people ever since. I’m currently the school’s chair.

The teachers are all industry professionals with day jobs. They teach at the Mechanics Institute at night out of a love for the trades. They don’t make a fortune teaching part-time, but they certainly help build New York City by doing so. They understand that they are a part of something that is much bigger than any individual. They also have a problem with student cell phones.

“I’ll give a test and the students are Googling for the answers,” one of them told me. “I tell them to stop. They hide the phones and keep doing it. They think I can’t see what they’re doing. And if they don’t like the topic I’m teaching on any given night, they ignore me and check their mail instead. Or they post to Instagram or watch movies. It’s a big problem.”

So we decided to turn the whole school into a No-Phone Zone. I know that sounds impossible, but I am a New Yorker and I remember when people smoked in restaurants. That used to be normal. The City passed a law to stop it and the restaurant owners went nuts saying that if people couldn’t smoke they wouldn’t go out to eat. They thought this new law was going to kill their business.

But it didn’t, and it’s now difficult to imagine anyone smoking in a restaurant. The same goes for airplanes and movie theaters. You can affect people’s addictions with a law. Peer pressure also works.

And so does choice.

At the start of each school year, we have a brief orientation where all of the teachers get to introduce themselves to the entire class and tell about their experience and what they’ll be teaching. During this orientation, I also get to say a few words. Here’s what I said at the last orientation:

“We are very happy that you are here, and I know that you are also very happy to be here because I read your application and your essay. I know what this school means to you, your career, and your family. Many more people applied than we could accept but you stood out. You told me about your dreams and I believe you are strong enough to achieve them. You chose to be here.

“So tonight we make a commitment to educate you for the next several years with no financial burden to you. In turn, we need you to make a full commitment to us. We need to you be fully present here. We need you to be here on time. I know you work during the day but you chose to be here, so be here on time. Your boss doesn’t want to hear about traffic or subways. Neither do we. You live in a city. There’s traffic. Plan and be punctual.”

No one was smiling at this point so I continued.

“This old landmarked building is now a No-Phone Zone,” I said. “When you walk through that door, your phone must be off. Not on vibrate. Off. I know you can do this because you are an adult and you’ve made a choice to be here. I believe that anything that happens during the 90 minutes of your class will still be there when the class is over. I believe you have the patience and maturity to wait. Be here, not somewhere else.”

“It’s an addiction,” I said. “I understand that, but I believe you are grown-up and that you can deal with it for 90 minutes several times a week. But if you can’t, know that that is your choice. Know that when you are poking and stroking your phone in class you are not present here. You are somewhere else. You are absent.”

“But please understand that this is your choice,” I said. “It has nothing to do with us. It’s in your hands. Decide.”

I stepped back. The teachers smiled and stood. The students, all adults, followed them to their classrooms. No one came up to the front to speak to me.

Not that many years ago, when my friends and I were wiping dog poop off street pay phones, a phone was about checking in with the office or home. That’s it. Now the phones are about being somewhere else. Always. And because of this, many of us have forgotten how to focus on now. Many people are gone. Just gone. Whether they’re in school, or supposedly working for you. They’re just gone.