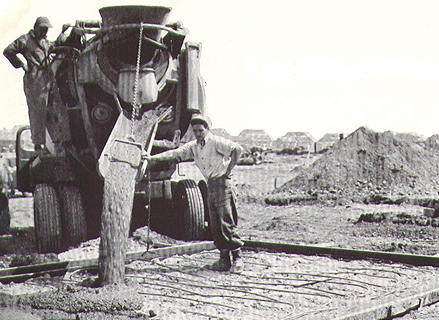 I have a photograph taken in Levittown, NY sometime in the late-‘40s. It’s of three men pouring concrete from a truck. The driver is standing by his door and just watching. The second man is standing on the fender and working the lever to release the concrete. The third man is directing the chute with his right hand. He’s wearing a sailor’s cap and his left hand is on his hip. He looks a bit like Elvis.

Off in the distance, I can see some of the 17,447 finished houses that William Levitt built on what was once a potato farm. The Levitt workers were finishing a house every two hours, using mass production techniques and interchangeable parts. The property had its own lumber mill and cement factory. No house would have a basement. Levitt had to appeal to the Federal Government to get away with that. The local politicians feared what would happen when less-affluent people moved into these very affordable houses, but most of those people were G.I.s returning from the war, so Levitt got his way.

Levitt chose to use radiant heating for these houses because it was the cheapest heating system he could find. His chief engineer, Irwin Jalonack, came up with a design that was as simple as can be. You can see the soft-copper tubing in the photo. Elvis is pouring concrete over them. A rectangle of two-by-four studs holds the concrete in place. What looks like railroad spikes keep the studs from shifting under the spreading weight of the concrete. The tubing runs back and forth in direct contact with the ground. There is no insulation under the four-inch-thick slab or at its edges. There is no vapor barrier under the tubing. With Levittown, the rule was to get things done in a hurry.

They laid the copper across the tops of eight-foot lengths of 1”X1” lumber to center it within the concrete. The lumber would be in direct contact with the ground, and since it ran perpendicular to the tubing, it would leave an open space beneath every tube within the slab once it rotted. That took about 10 years to happen.

The rotted lumber also created a perfect place for the slab to crack as time went by. That caused many of the tubes to leak water into the ground. The homeowners didn’t notice this at first because no water came up through their floors. Sooner or later, though, they’d notice it as an increase in their water bill, or their fuel-oil bill. That’s when they’d call for help.

J.D. Brower Plumbing & Heating, a long-gone, Levittown company, ran an ad in the Levittown PennySaver in December 1958 when I was eight years old and growing up a few miles away in Hicksville. The headline read: This is the Radiant Heating Layout of your Levitt House. SAVE IT. Below that was an engineer’s drawing of the tubing within the slab, along with the house trap and fuel-oil tank, both of which were buried under the front lawn. Those buried fuel-oil tanks would leak and cause an expensive problem for homeowners as time when by, but no one was thinking about that back then.

There’s a note in the ad stating that J.D. Brower Plumbing & Heating was expert in radiant heating and they knew how to fix floor leaks and braze joints. They must have done very well for themselves because, as I said, Levitt poured 17,447 slabs on that potato field and they were all identical.

A Levittown plumber once told that he used a screwdriver to listen for the leaks in those slabs. “I’d crawl around the floor with the handle pressed against my ear and the tip on the floor. After a while, I moved up to using a stethoscope.”

“It was. You had to be very quiet to hear the leak. But then I learned a better way to do it.”

“Oh, something a housewife taught me,” he laughed. “Go figure. A housewife teaching me how to find leaks.”

“Well, I was crawling around in her house and she was laughing at me and my stethoscope. I guess I must have looked pretty silly to her. She wanted to know if I heard the house’s heartbeat. I explained how this is how we find the leak and she said she had a better way.”

“You gonna tell me?”

“I’m getting there. Hold your horses. You’re gonna love it. She told me to take a seat at her kitchen table, which I did, and then she got a mop and a bucket of water. She started mopping the floor over there by the fridge and then she went and turned up the thermostat.”

“What happened?” I said.

“The pipes appeared! It was like magic. She told me she always turned up the heat to dry the floor because she didn’t want the kids to slip. She had four kids. Then she pointed to this part of the floor where it was drying in a big splotch instead of a straight line. She asked me if that’s what I was looking for, and sure enough, it was!”

“Yeah, she was a lot smarter than me, and I’m sure grateful for that trick. I used it for years.”

Another Levittown plumber told me he had an even better way of finding the leaks in those slabs. “I used a cat,” he said.

“Yeah, a big fat one. You ever notice how a cat will always look for the warmest place to lay down? He’s going to find himself a sunny spot, or climb up on top of a cast-iron radiator.”

“Well, when we needed to find the leak, we’d close all the window shades and let the cat loose in the house. Mine was so fat and lazy he couldn’t wait to lie down, and cats love radiant floors. So do dogs, but cats are better because they general ignore people and just get to doing what’s best for them.”

“You’re a philosopher,” I said.

“So the cat would find the leak?” I said.

“He sure would, and in a hurry because the leak made more of the floor warm, and that’s what any fat cat wants - a warm place to lie down.”

“Is that the origin of the Cat Scan?” I asked.

Heating oil companies that service Levittown tell me that only about five percent of the houses still have their original radiant systems. All the rest have been converted to copper-fintube baseboard that follows the entire perimeter of the house.

You can find the houses with the original radiant systems by visiting in the winter when there’s snow on the ground. There won’t be any snow within several feet of those houses because Levitt spent not one dime on slab insulation. Tulips sprout in February around those houses. They’re a sight to behold.

It’s quite a place, Levittown. It’s the birthplace of radiant heating done on an enormous scale because, back then, hydronic radiant heating was the cheapest system available.