The Boyertown Foundry is the big guy on the stool over there who is sometimes quiet, but who rises with pinpoint violence when needed. There is a fury about him that you can sense even when he's still.

He waits. He's patient. He beckons things that were born at other foundries, but are now abandoned and unloved. Some call these things junk, or scrap; he calls them blood.

The things wait, as if in purgatory, in a metal mountain that sprawls next to him near this small Pennsylvania town. This scrap pile rises as tall as an old city tenement, spreads wide, and presses hard into the earth. A crane overhead claws at the pile on a day of pouring. It moves the old iron scrap, along with heaps of coke and limestone and other ingredients, sending this stew rattling into the big guy's maw and an impossibly hot blast furnace that will give birth to something brand-new, but something also filled with memory and history. And pride:

Still blushing with Victorian filigree, an American Radiator, Rococo model, tilts precariously against the edge of a large brake drum, like a senior citizen being held under an arm by an old fighter. Both wait. The radiator is 110 years old. She remembers the day she was born in a Detroit foundry and how she traveled by train to the home in Philadelphia that she served for so long. She recalls the children and the parents, so many generations of them, and the gloves and hats she warmed. The appreciative dogs and cats. She remembers war and peace. She remembers birth and death. She was there for all of it, and she was faithful.

But she became old-fashioned, or so they said. Multiple owners of recent years resentfully tolerated her. "What if the children touch it?" they all said, and worried. They painted her silly colors to match the national mood at the time, but none of those colors could replace the gratitude she once felt from the people long gone, the people who weren't raised to expect warm rooms. The recent owners covered her in a coffin-like box for a time. For the children, they said.

And then, when the economy improved, the current owners had her ripped from her pipes and replaced with something modern. They offered her on Craigslist but no one wanted her. She was useless, or so they said. 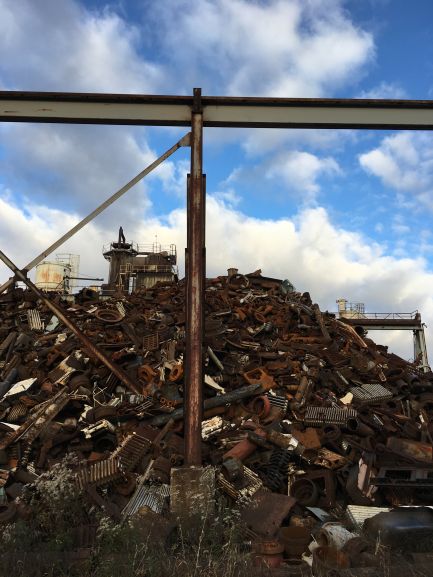 And here she was.

The brake drum's life was one of frantic fury and much, much shorter than the radiator's. He traveled the Interstates in all weather and bore up to drivers who hit him too hard at times, but what can you do?  He was there to serve, and he did just that. He kept people safe, and that thought comforted him.

He bore up under the weight of the old Rococo radiator and wished he could have had such a life instead of the grinding one he had had, but it is what it is, and now they, and so many others, were here on this pile.

What did it all mean?

Six feet lower on the pile is a three-inch gate valve, abandoned because it rusted in place. He had served a ConEd district-steam line that enters a Manhattan building just off Fifth Avenue. He had felt the fury of high-pressure steam passing through him and into a pressure-reducing valve ten feet down the line. The PRV wrangled the ConEd pressure down to 50-psig, and then passed it on to its partner PRV, who brought the pressure further down to what the building needed. He served those two PRVs like an acolyte for as long as anyone could remember. Should the PRVs need a rest, he would perform his simple task of closing, and when he wasn't needed, he would wait. He was faithful in this, but after decades, his inner workings atrophied from lack of exercise. And then, on this one day when they needed him most, he couldn't move. The people cursed him and the costs he added to their project, and they replaced him with someone younger and fit. His replacement would someday feel their scorn as well; he knew that, but that would come years later.

They tossed him out and a truck brought him to Boyertown. He had no idea what would come next. He just waited, as he always had, and he accepted this as his job, and his fate. He had done the best he could.

Five feet to the left of the valve is a large pump volute, stripped of her life mate, a sleek bronze impeller. The volute is useless now. She knows this. She thinks of the millions (billions?) of gallons of water she and the impeller moved together during all those years. Where did all that water go? It seemed endless. Confined to the basement, neither knew that there were hundreds of radiators attached to those steel pipes, and that they all worked together to warm tens of thousands of people who came and went, lived and died. The volute directed the water that the impeller flung furiously from eye to edge. They were a team, a true marriage. What had happened to him after the people separated them? What had it all meant? And how did I wind up here?

There were people, the cast-iron, claw-foot tub whispered. So many people. I remember all of them. They filled me with warm water. In the beginning, they used me every few days, some just once a week, but as time passed, the new people used me every day. They filled me less and less as time went by, but they showered warm water down upon me each day and that was lovely, like summer rain. Some sang sweet songs. So sweet.

The children were my favorites. They always filled me. Their little boats and their cups and their games. And they splashed! My sides were taller than their heads, and they loved their time with me, as I did with them.

But look at where I am now. Where is this place? People come here. I know this; I see them; but none touch me as people once did.

What is to become of me?

A double sink, white and durable and too heavy for one man to carry hears these words and remembers the scraps from the many meals. In some years the scraps were few; in other years they were plentiful. And the hands that washed in soapy water that tickled, and the drain that gurgled. Where did all that water go? And what of the people? So many of them. Where did they all go? And what is this new place? Where am I?

The soil pipe, like cast-iron pick-up sticks, is everywhere in the big pile, broken and bashed, but still strong. Replaced by plastic. Imagine that.  Plastic.

The pipe remembers the molten lead, and how its enormous heat recalled birth at their own foundry. The heat. The flowing. The joining. There were men who confounded gravity with that lead as they poured joints that connected this length of cast-iron pipe to the next. What happened to those men and their skills? And who knew that the lead could do so much harm? It seemed such a faithful servant in those days. Who knew that it would turn on the people and hurt them?

The pipe knew where the water went, and all else that flowed from the bathtubs and sinks. It said nothing of this, though. Best to keep still when you don't know what's to happen next.

And scattered throughout the pile were broken and rotted cast-iron sections from the many boilers that had served Americans in recent years. The boilers had done their best, even though few people thought of them from day to day, or cared for them from season to season. They were once an American wonder, these boilers. They brought summer indoors during the winters. They saved human lives, and now here they were. Here in this pile. And what was to become of them?

But today is a day of work. A day of pouring, and the big guy that is the Boyertown Foundry gets up off his stool, spits on his hands, and flexes muscles that will turn all that waits on the pile, all of this unwanted, discarded, unloved scrap, this junk, into new boilers that will serve people.

The big guy will do his work with a violent fury, but it is also a loving fury, an American fury. A fury that remembers what once was, and what has always been possible. 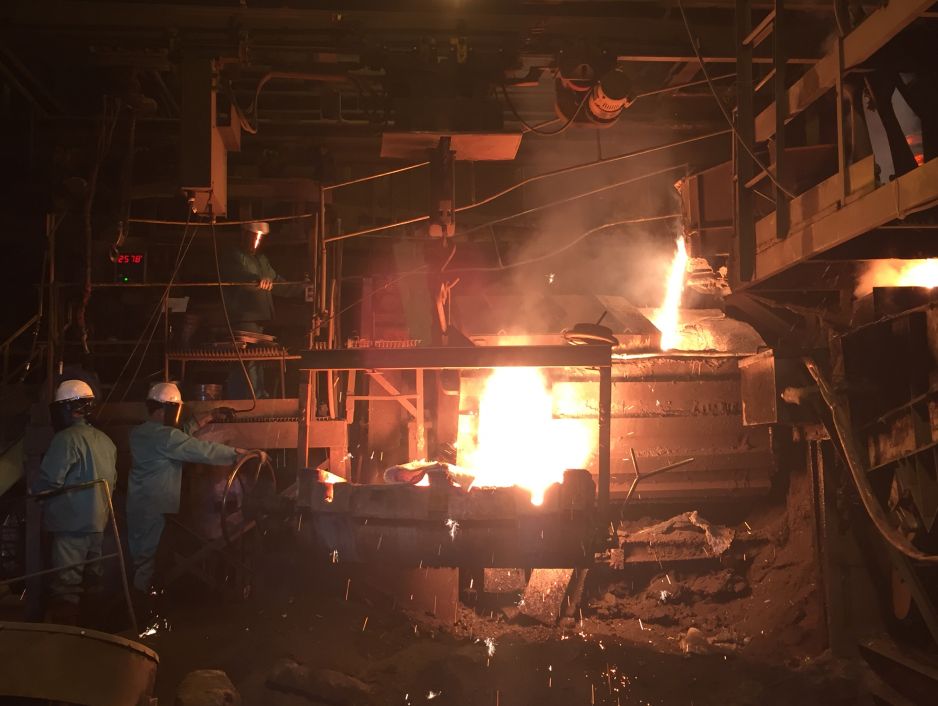