Categories: The Business of Heating, For Homeowners 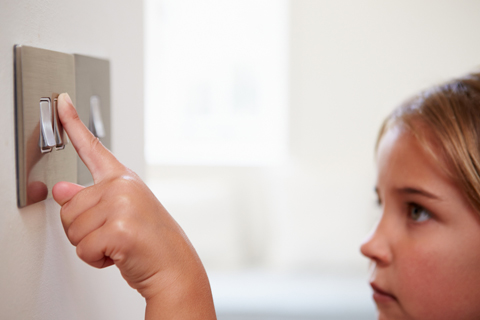 The title of the article that appeared in UKToday news some months back was, 5 Easy Ways to Teach Kids about Energy Conservation. There was no author listed but I’m wondering if the person who came up with this article even had kids. Kids aren’t easy, especially when it comes to energy conservation. Allow me to explain.

The first Easy Way the writer states is to teach the kids how to turn off lights and screens. There you go. Sounds easy, right? But teaching them how to flip a switch is not the same thing as getting them to actually flip the switch. Our four daughters were very good at switching, but only to the on position. They’re still very good at this, even as adults. And this, of course, applies mainly to when they’re at our house, where they’re not paying for the electricity or the fuel.

Our daughter Colleen is married to Adam, a fine fella, but I suspect that when he was a child Adam did not take to heart the first Easy Way. When he’s at our house he sharks around, turning on every light in every room as he glides through. He also turns on every ceiling fan, regardless of the season. And he opens the windows during the winter because he’s hot and fresh air is cold. Colleen refers to her dear husband as Mr. Breezy.

But since I am somewhat knowledgeable about heating and cooling and how our bodies react to ceiling fans I’ve explained to Adam more than once how the human body is a radiator. We lose heat at a very definite rate, and in three ways. We sweat, which cools our bodies through evaporation. We radiate our body’s heat to things that are colder than we are (which is why hydronic radiant heating feels so delicious). And we lose heat by convection as air moves across our skin. When we sit under a fan, the moving air causes our bodies to lose heat, just as a fan will increase the output of a hot coil in a heating system. A ceiling fan, however, does absolutely nothing to cool the air in the room. It only cools the people in the room. And if nobody is in the room the fan is just spinning energy dollars down the drain.

Adam has considered this. He has nodded in understanding, but then he just keeps flipping switches on. Why? Because he’s Mr. Breezy.

I’m old enough to know that we must choose our battles, and I have conceded this one to Mr. B.

Their daughter, Quinn, is another story. She is more adorable than a room full of puppies and leaves the ceiling fans and the lights alone. Whichever position they are in is fine with Quinn. The only switch she loves is on her iPad, which is home to Minecraft, a game I will never understand because I am not eight years old. If I were to remove the iPad from Quinn’s hands I believe she would continue to love me, but not so much. So that’s another battle that I have conceded.

Have you ever noticed how our cars have zones? And have you ever noticed that even if your car has four heating/cooling zones, not everyone is happy? The kids are in the backseats, screaming about how cold or hot it is the minute you start the car. They don’t like to wait, and they don’t stop whining until you get home and kick them out of the car.

And since you’re now home, they head for the thermostats because they’re coming in or out of the cold or the hot and they want the inside to be better. And they want that instantly. And these days, they’re not just touching the thermostats; they’re also yelling at poor Alexa, and she doesn’t know who the heck to listen to. It’s a wonder she hasn’t quit.

Grandgirl Quinn and two other grandkids live in the steamy DC/Metro area. They all go to the same school. On her first day of second grade, Quinn’s teacher met Quinn and his other students for that year by the front door and introduced himself. “Nice to meet you,” Quinn said. “Now can you please stop talking so we can get to where the AC is?” She gave him her Kool-Aid-pitcher smile and he was speechless.

Imagine her in 20 years.

Good luck with that. We had four daughters in three years. Okay, so we cheated on the last go-around by having twins, but there they all were, nevertheless. For a while way back then, we had just one bathroom in our small house. Can you even imagine that without cringing?

Now picture four girls, ages 13, 11, 10 and 10. They all have to be in school at the same time. This was during the ‘80s, when they all wanted to look like Olivia Newton John in Grease.

So let’s find an Easy Way to conserve our planet’s precious supply of water.

“Showers and baths can waste a significant amount of water and energy,” our anonymous British author writes in the article. “It’s helpful to get kids in the habit of taking shorter showers – and make sure it’s a universal rule that applies to you, too. Start a family challenge for everyone to cut two minutes off of their showers.”

Kelly, our 13-year-old at the time, had a habit of taking baths, not showers. She would bring a pulp Babysitters Club book into the tub with her. She would lock the door, dribble a continuous flow of hot water and allow it to leave through the overflow pipe (“I hate to be coooold!). And she wouldn’t come out until that book was as soggy as a newspaper in a hurricane.

The only thing that helped us get through this was the American Standard Arcoliner boiler that was as old as I was. It had a tankless coil that was pleading for its retirement.

Looking for a real-world way to encourage teens and tweens to take shorter showers? Consider getting a 41-year old tankless coil.

Next! Easy Way #4: Ask them to do their homework next to a window so they can take advantage of natural light and gather up lots of Vitamin D. However, what you’ll actually experience in the real world of kids is this:

“I can’t sit here! It’s too cold! And it’s too hot in the summer! And I don’t want the boys looking in at me. My hair isn’t fixed! You’re so mean to me. And they’re all looking at meeeee! I hate you!”

And up into their rooms they stomp, slamming the doors, drawing the drapes, and turning on all the lights, and the TV, and the ceiling fan, of course.

The more I think about it, I’m now positive the person who wrote this article does not have kids. Kids are not what you think they’re going to be. They just aren’t.

And lastly, I have to say I do think Easy Way #5 is noble, but not so workable. Listen:

“When they’re older – perhaps in their tween or teen years–— show them that they can do things like contact their council or local officials and garner support for environmental causes in their neighbourhoods and schools.” our writer says. “Also, show them what you’re doing – from the habits you keep at home to the steps you’re taking to become more engaged on these issues yourself.”

I’m all for this, dear British writer. By all means, let’s encourage kids to talk to the politicians.

Why shouldn’t the kids be as aggravated and frustrated as the rest of us?