The Power of Re-piping with PEX For aging buildings — or newer structures with piping-performance issues — the decision to continue repairing the existing plumbing and heating systems versus doing a total re-pipe can be daunting. The following three examples of re-piping success with flexible, crosslinked polyethylene pipe (PEX) will offer insight when the time comes to re-pipe a large commercial structure.

We often think of a facelift as an external beautification tool. But in the case of older buildings, it’s what we cannot see — behind the walls — that typically needs the biggest makeover. Take, for example, the case of The Arts at Broussard Crossing, a 184-unit apartment complex in Lafayette, La. The building’s plumbing system had suffered from leaky pipes and mold issues for quite some time when the owners decided to replace the outdated polybutylene piping with PEX, or crosslinked polyethylene, a flexible plastic piping product that is growing in popularity for commercial plumbing and hydronic piping systems for both new and re-pipe applications.

For the extensive re-pipe project, which required the installation to take place while the building was occupied, the building owners hired SageWater, a Virginia-based company specializing in pipe replacements. The company had installed more than 30 million feet of new pipe in more than 80,000 apartments and condominiums over the past few decades, so the building owners had confidence in their abilities to do a good job and come in on schedule and on budget.

The installers were able to run 300-foot coils of the PEX piping in continuous lengths with no fittings, ensuring faster installation times while also reducing the opportunity for mistakes.

“It’s a balancing act to work around tenants’ essential comforts and the need to install the new pipe [cutting into ceilings and drywall for access], and then to repair and paint after the work is completed,” said Nelson. “But, we do a lot of re-pipe jobs, so we are comfortable balancing all the elements involved, so the job is done quickly, correctly, on time and within budget.” 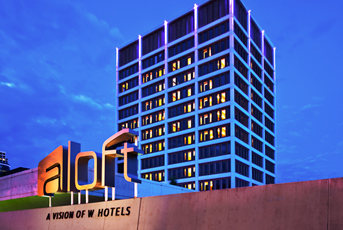 Another project, the Aloft Tulsa Downtown Hotel in Tulsa, Okla., involved not just a re-piping, but also a total renovation of that city’s former City Hall. And here’s the catch: The 2013 project was an historical building, whose renovation often comes with added restrictions and requirements when undertaking a renovation.

The developer, Brickhugger LLC, wanted to keep the original marble walls and terrazzo floors, mixing them with Aloft’s signature light fixtures and ceiling designs. The structure needed a complete overhaul, including a new plumbing and hydronic piping system.

“In a redesign job, there is usually limited workspace, and this job was no exception,” said Todd Ringgold, project manager at that time for Palmer Mechanical, the company hired to do the plumbing and hydronic piping installation. (Todd Ringgold now owns Ringgold Plumbing in Broken Arrow, OK.) “We worked with a very tight ceiling space. The hallways were dropped only two feet, and we needed to accommodate fire sprinklers, fresh air, sanitary sewer, exhaust air, heating, cooling, domestic hot and cold water and lighting.”

Palmer Mechanical had been involved with other historical renovations in Tulsa, such as the venerable Mayo Hotel. As a result, says Ringgold, local engineers have built a high level of trust in Palmer’s recommendations.

“When we work directly with developers in our own design-builds, we almost exclusively specify PEX because of the savings we are able to bring to the projects,” he explains. “PEX allows us to run our lines in such a way that we can avoid conflicts with other trades and keep up with our deadlines without interrupting other installers and without compromising the integrity and quality of our installation.”

According to Ringgold, PEX offers significant labor savings due to the speed of installation with the flexible piping. With rigid CPVC, the installer has to glue and wait for the joints to set up. There is also excess material waste with CPVC because the installer has to be careful not to mix up adapters. And with copper, there is always the concern about construction-site thefts, increasing costs and installation times.

Aging educational facilities are also seeing benefits with PEX for re-piping. For the George Fox University dormitory renovation in Newberg, Ore., school officials decided to prioritize energy savings by adding new piping to their outdated radiators. Hydro-Temp Mechanical of Wilsonville, Ore., was the contracting firm chosen for the project, and the company worked closely with Uponor’s area sales agent, Hollabaugh Brothers and Associates (Portland), to provide the best solutions to the challenging project.

“We have a longstanding relationship with Hydro-Temp that allowed us to discuss product performance and installation parameters,” says Casey Hollabaugh, vice president of Hollabaugh Brothers and Associates. “We brainstormed several possible solutions, but because of the complexity of the remodel, PEX piping became the only viable long-term solution.”

Specifically, the pre-existing construction (mostly concrete walls) made other alternatives like copper cost-prohibitive because excessive demolition would have been required to install the rigid pipe. Because PEX piping is flexible, installers could easily insert the piping through hole penetrations in the existing framing, eliminating the need for unnecessary teardown.

“Our goal was to reuse the old galvanized piping penetrations, but with window upgrades and other architectural considerations, the old routing didn’t line up exactly in a straight line with the layout of the rooms,” said Daniel Jeffrey, project manager with Hydro-Temp. “But the flexibility of PEX allowed us to adjust the offset in the 200 existing wall penetrations.”

Jeffrey estimates that if the crew had used rigid pipe, they would have had to offset each wall penetration (over 100 pairs) with eight, 90-degree fittings. “That would have been around 800 more fittings to install,” he estimates.

As buildings continue to age, and renovations continue to expand, it is becoming apparent to the commercial building world that PEX is the material of choice for re-pipes. Not only is it a durable, reliable and high-performing product, but it is also highly flexible — making it extremely viable in tight, constrained spaces that are typical in re-piping projects.

Kim Bliss is the senior writer for technical communications at Uponor. She can be reached here.