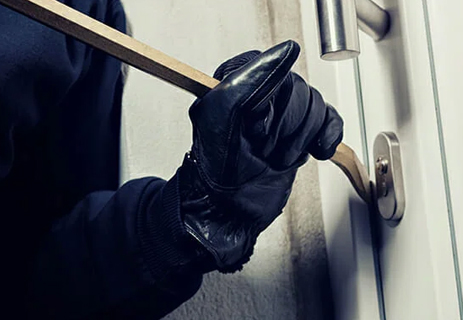 We had a warehouse break-in over the weekend when I was young and working inside-sales (read, order-taking) for a manufacturers’ rep on the Isle of Long. We had just moved into the building and my father was the warehouse manager. The thieves had earned their plunder because they had come in through a window that was about 15 feet off the ground. They crashed the glass and helped themselves to three pallets of Bell & Gossett Series 100 circulators. That’s 240 pumps, each weighing 20 pounds. And they didn’t bust the garage door. They must have passed those pumps one at a time though that broken window. I had to admire that. Our daytime guys didn’t work that hard.

One of our old-timer salesmen stopped by the office the following Monday. This guy wore a gray fedora and an old top coat. He owned two suits - one blue and one gray - which he alternated from day to day. He called on the Mom-and-Pop wholesalers in Brooklyn and Queens. In those days, there must have been one of those on every other corner.

“Let me know when they call for the flanges,” he growled as he chewed on his pipe.

Sure enough, a week later, one of the Mom-and Pops called and asked for 240 sets of flanges in various sizes for the Bell & Gossett Series 100 circulator.

“Do you also need the pumps?” I asked.

Our salesman went to see him that day because he had not sold Pop that many pumps. Pop said he had gotten a good deal on the pumps from some guy who stopped by with a truck. The price was amazing. How could he say no?

Our salesman responded by pulling all our products out of his inventory. He told the wholesaler he would never again be able to buy from us. We were to hang up on the guy if he ever called. And we did. It was a different time.

During the late-‘70s, the Bronx was burning and I was calling on contractors for that same rep. A fella from New York City’s Department of Housing Preservation and Development called to ask if I would be willing to come to their office and talk to their engineers about how to design one-pipe steam heating for the run-down, City-owned tenement buildings they had to renovate.

“Steam?” I said. “Why would you want to do that? No one is designing one-pipe steam for apartment buildings these days. You should design for hot-water.”

“We had a contractor install copper fintube baseboard in a pilot project,” he said. “This was a five-story tenement in the Bronx. We need to provide housing to get mothers with small children out of single-room-occupancy housing. We have no choice. There’s a new law.”

“So what happened?” I asked.

“The contractor installed the copper baseboard, the copper tubing, the brass valves. Are you following me on this?”

“Copper and brass have scrap value,” he said. “That stuff came out of the building faster than the contractor could install it. The guy told me he was trying to solder an elbow one day and the pipe started turning. There was a thief on the floor below him, working harder than he was.”

“So that’s why you want to do one-pipe steam?” I said.

“So there’s nothing worth stealing?” I said.

So I ran a class for them and they specified one-pipe steam for a few hundred five-story tenement buildings throughout New York City. All of those went in, and as far as I know, they have been purring along ever since. Steam, when done properly, is quiet, fast, efficient, and not worth much as scrap.

But even with all those virtues, not all of those jobs were safe. Most of them were burning Number 2 fuel oil, and that calls for a relatively large oil burner.

“I got this service call,” one of the contractors who installed some of those new steam systems told me. “We were responsible for each job for one year. No matter what went wrong, the City called us to take care of it.”

“So what happened?” I said.

“The call was for no heat,” he said. “I sent my guy out to look and when he got to the boiler room he noticed right away that the oil burner was missing.”

“Yeah, and it’s tough to solve a no-heat call when the burner isn’t there.”

“Well, he went to a pay phone and called me. I told him to wait on the job and I’d stop by. When I got there we looked at each other and tried to figure out what to do next. These burners weren’t something you could just pull out of your butt, if you know what I’m saying.”

“Anyway, we’re standing there looking at the hole where the burner used to be when this guy shows up. He says it looks like we’re having a problem and he thinks he can help. He has a cousin that has a big collection of oil burners. It’s just what he does. Some guys collect baseball cards. Other guys collect coins. His cousin collects oil burners. He looks at the hole in the boiler and says, ‘I think he’s got one that will fit that hole.’ How much? I ask. ‘Fifty bucks should do it,’ he says.”

“Oh, sure. He was back in less than 10 minutes with the burner on a red wagon. He even helped us install it.”

“So what happened then?” I said.

“He told me his cousin could help out again if we ever needed it. So I asked him how about if we pay his cousin now for the next nine months until we were beyond the warranty period. We negotiated a fair price. He was reasonable. Who doesn’t like repeat business?”

“And just to help, I had my guy weld some angle iron over the boiler room door to make it more difficult to get the burner out. The guy and his cousin weren’t too happy about that, but they understood. It wasn’t anything personal. Just business.”

A friend who works for a heating manufacturer told me that the head engineer for a large city's housing authority once told him that they purchase an average of 20,000 linear feet of copper, fintube baseboard each year to replace what’s stolen for its scrap value. That’s pretty horrible, but it also keeps the big wheel of commerce turning.

And of course America is not alone when it comes to this. Thieves are everywhere and they come in all shapes and sizes. I was in Dublin, Ireland in 2003 and I struck up a conversation with a heating contractor. He told me about the tough neighborhoods he used to work in.

“I don’t go there anymore,” he said. “But back then, I was just starting out and I would work anywhere they would hire me. I kept this big dog in my van. I figured that was a good idea,” he said. “Who’s going to bust into a van if there’s a big dog inside?”

“I thought so, too, but then one day I was in this particularly rough neighborhood and a group of tough lads came up to me as I was locking the van’s door. They told me they’d be happy to protect my van whilst I was in the building.”

“I smacked the side of my van, which set off the dog. You should have heard him claw at the metal. I told the lads that this is the only protection my van needs.”

“That would have convinced me,” I said.

“Me too,” he said. “But then the shortest of the lads asked me if my dog was smart and I told him straight up that my dog was probably smarter than he was.”

“We worked out an accommodation. All in all, the lads were reasonable. I suppose they were thinking about repeat business.”