In New York’s Central Park, there’s a building across a walkway from the Zoo that has been there longer than the park.

It is The Arsenal. When I was a boy, we lived not far from there and my parents would take my big brother and me to watch the bronze animals in the Delacorte Music Clock twirl on the hour. That magical clock is very near The Arsenal. This is one of the delicate pleasures of growing old. We can stand in a place and remember a sweet time that will never return. 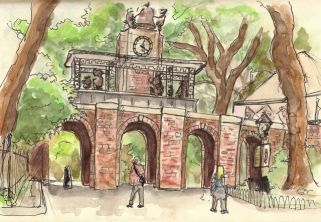 The day I visited The Arsenal as an old man I listened to the clock and remembered. As a boy, The Arsenal was just a building to me, like all the other buildings in Manhattan. I didn’t even realize it was old. It was just there. But now I see it as a place where I left a bit of myself one frigid January day and that makes it precious to me.

The State of New York built The Arsenal between 1847 and 1851 and designed it to look like a castellated fortress because it was to be a place where they would store munitions. There wasn’t much else around it. But then came the idea of a central park in Manhattan, a place where people could enjoy nature, regardless of their social standing, so the city laid claim to the building and, in 1857, it became a police precinct. Twelve years later, it became the temporary home of the Museum of Natural History, as the current, iconic museum was rising on Central Park West.

Years passed and the Arsenal became, in turn, a menagerie, an art museum, and also home to New York City’s Weather Bureau. The Parks Department took up residence in 1914 and set out to repair the damage done by so many seasons in such a fast-growing, coal-burning city. In 1934, it became the home of the new, citywide Parks Department under the direction of Robert Moses, who set out to transform the City of New York, and he sure did that.

It’s not just a building. I knew that when I visited as an old man. And that’s the beauty of age. Age brings with it understanding and appreciation. I was there because a friend at the Parks Department asked me to take a look. I smiled. Who could say no to this?

The Arsenal is one of only two Parks Department buildings that take heat from the district steam system run by Consolidated Edison. High-pressure steam enters from under Fifth Avenue and goes immediately through two pressure-reducing valves, piped in series. These drop the steam pressure to a few pounds per square inch, which is the right pressure for the building’s cast-iron radiators. The problem, though, was that it was taking two hours for steam to reach the radiators once it had passed though the PRV station and that had people very upset. Those who were getting heat were getting too much of it. They opened the windows. Those who weren’t getting heat were complaining. Who wouldn’t?

So we begin at the PRV station with the question, If I were air, could I get out? And then we get nosey. We get a bright flashlight and a couple of guys who work in the building every day. We follow the pipes. We climb ladders. We look into drop ceilings. We smile as we disturb people in their meetings. They watch as we shine the light. We ask them if they’re comfortable, if their radiators make noise, if they have any particular problems. They give us clues and we pay attention.

Some of the radiators are mounted on the ceiling. That’s not unusual with a system such as this. Steam doesn’t know up from down. It’s a gas. It’s looking for a way out. It’s looking for an air vent. If a room’s heat loss is, say, 10,000 Btuh, and the radiator can deliver 10,000 Btuh, it doesn’t matter where in the room that radiator is. And that’s why we often find steam radiators screwed to the ceiling.

And each of these radiators has a thermostatic radiator trap, an automatic valve that is sensitive to temperature. Steam pushes the air down the pipes like a plunger. Steam and air have different densities; they won’t mix. The air goes through the radiator and through the trap and into the condensate-return pipe. The trap closes on temperature; the steam gives up its latent heat, and condensate forms. The trap opens and pressure differential moves the condensate into the return line.

So why was this taking two hours to happen?

As we’re walking, we’re asking that question: If I were air, could I get out? We get to the end of each steam main and we see a large float & thermostatic trap. This is as it should be because the return lines from the radiators are right next to the steam mains. Without the end-of-main traps, steam would cross over into the return lines and that would put pressure on both the supply- and return pipes. The system would stop working because air would be trapped inside the radiators. It’s all about Delta-P. Where there is no difference in pressure, there can be no movement of fluids or gases.

We walk on, shining the light and following the condensate return lines. We get to the ends of these lines and see more float & thermostatic traps, which are not supposed to be there. There are steam traps on the radiators and F&T traps at the ends of the steam mains. That’s as it should be and that is enough. There’s no steam pressure beyond those points because the traps are working.

But if you were air, could you get out?

So I told them to remove the unnecessary traps. They did and the building now heats in 10 minutes instead of two hours. They lowered the steam pressure even more and things got even better. That’s the piece of me that I left there.

Before we left, my friend took me into the boardroom. The Parks Commissioner was having a meeting. My friend excused us and told them I was fixing their heating system and wanted to see the map. They smiled. I smiled. And then I walked to the map of Central Park that was nearly as wide as that long wall. Fredrick Law Olmsted, the designer of the park, had drawn it by hand. It was his proposal for a central park in the City of New York, the place where I was born, the place where I played as a boy. Such wonder. Paper, come to life.

I was in Central Park with The Lovely Marianne when spring arrived. We were watching the seals play in their pool. I turned around and looked at The Arsenal. There had been a steam main vent that someone had installed outside the building, near one of the upper-floor windows. It had been spewing steam when I visited. It had no business being there, but I figure someone had gotten frustrated along the way and tried this. “They got rid of the vent,” I said.

“What are you talking about?” she said.

“Up there. There used to be a steam vent sticking out through the wall.” I pointed. “And someone double-trapped all their return lines. That’s never a good idea.”

She gave me that look she gives me when I get like that. She didn’t bother looking up for the missing main vent. “It’s almost eleven,” she said. “Let’s go listen to the clock play music.”

“And watch the animals dance,” I said. 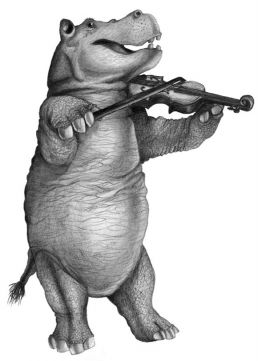