When I was young and working for the manufacturers’ rep on Long Island, I wanted to get some hands-on experience, so I went to the larger, family-owned fuel-oil dealers and asked if I could work for a day or two as a helper to their best technician.

Most of the service managers I asked laughed and asked why I would want to do that. I explained that I needed to feel what they felt because I wanted to write about it. I wanted to clean boilers and work on steam pipes and rub sweat out of my eyes. They smiled and told me to report at 6 AM in old clothes. Don’t wear sneakers.

I never told my boss I was doing this and I did it again and again across Long Island, New Jersey, New York City, and upstate-New York. Those guys gave me dirty jobs to do and they told me stories all day long. And they taught me about the tools.

I traveled with an oil-burner technician on Long Island for a very long couple of days. He had to produce, so he would clean any pin boiler we visited with a tree sprayer. He removed the top of the jacket and the insulation and then pumped up the tank and sprayed water and soot down into the combustion chamber. He’d then toss in a soot stick and let ‘er rip. I asked him if that was the right way. He said it was his way, and he was Top Dog when it came to getting jobs done quickly. Those were his tools.

Another guy showed me how to check the stack temperature by spitting on the flue and seeing how it sizzled. It was like watching a short-order cook fry eggs. He checked the draft with the smoke from his Marlboro. See how quickly it rises? He could tell the temperature of the water in a pipe within a few degrees by grabbing the pipe in his calloused hand and holding it for a few seconds. Check him with a thermometer. Go ahead. His hands were his tools. Today we use electronic instruments to set up burners. He’d call us sissies.

My family moved from Manhattan to Long Island when I was seven years old. My father, who was the shipping clerk at a now-gone Manhattan supply house, wanted a screened-in porch on the back of our house so he could sit outside during the summer and drink beers. He knew a million people in New York City, and he had more angles than a protractor factory, but he was a lousy carpenter. So he talked Mike the Russian into building the porch for him. The price was meat sandwiches and icy vodka. I’m sure there were other favors owed but that was between them.

Mike didn’t own a car, so my father and I drove into Brooklyn at sunrise on a summer Saturday to pick him up. He was waiting in front of his building with his tools:: A handsaw, a sharpening stone, a hatchet with a hammer head, his hands and his eyes. That’s it.

He tossed the tools on the backseat with me as my father aimed the Mercury home. They laughed and smoked and Mike commented in his Russian accent about the smell of Brooklyn. “Hey, Mike,” my father whispered, “the kid’s in the back. He’s not used to words like that.” And Mike turned around and gave me a hard look that made me feel older. “Boy needs to learn!” he boomed. And that was the last my father had to say on that subject.

Mike built the whole thing in a day. He could have shaved with that hatchet. I watched him work for hours. He looked at pieces of wood and corners and angles and then he mitered the wood with a few strokes of the hatchet and with ridiculous speed and confidence. The wood acted as if it had been waiting for him. His level was his eye; his ruler was his hands. His handsaw ripped though wood as if it was snow. I had never seen anyone work like this. He was meant to live in an evergreen forest, not in a city.

Years later, I read about the Church of the Transfiguration of the Savior that Russians had built on the Island of Kizhi in 1714. 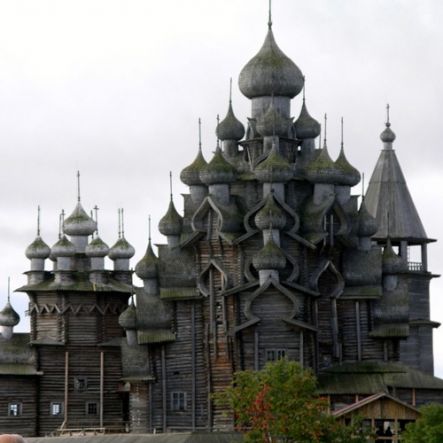 It looks like a massive wooden wedding case and it contains not a single nail. It’s mitered and fitted and I thought of Mike the Russian when I learned of that church because old men can hold onto us long after they’re dead.

Three years passed. Our family grew, and Mike’s screened-in porch morphed into a bedroom. My parents wanted a second bath, so my father and I drove to Brooklyn and came back with an old Jewish plumber named Moe, who was Jackie Mason with tools. I watched him put soil pipe together with molten lead. I had never seen this before. Moe jabbered on about how he had learned this and that and he was funny. And then he got to the horizontal pouring and that’s something I’ll never forget. How difficulty that is to do but he did it every day. That lead was primal and it was beautiful to watch. It was a liquid tool.

I mentioned that my father was a shipping clerk. That was a big job at the time because America was booming in the ‘50s. Building started up again after the war and copper and steel were available and very valuable. My father ran more than two dozen trucks out of that supply house on East 79th Street. His drivers were his tools and his friends and many of them came to our house to visit.

One of these men was Billy Escowitz, a former Golden Gloves boxer and a guy who had been to war. He looked like he was made of concrete and used auto parts. Billy had hands like oak tree roots. He wore bib overalls and always carried two pairs of pliers in the middle pocket, close to his heart. It was the sort of thing that could catch a kid’s eye. Tools.

When I got older and was at the bar with my father, I was thinking about Billy and I asked my father about him and those two pairs of pliers that he always kept so close at hand. My father smiled as he remembered. “That was how Billy took care of business,” he said, and then he told me of the robberies that were happening after the war, and how street toughs would wait for a truck to stop at a traffic light. They’d approach from both sides and pull open the doors. Then they’d yank out the driver and kick him to the curb. Take his truck.

“Did they try that with Billy?” I asked.

“A few times,” my father said, taking a drink.

“Well, you remember his fists, right? How huge they were?” I nodded. “Well, when those guys yanked open the doors of Billy’s truck, he would let them in. And in each of those big fists he held a pair of pliers. And then he went to work.

"Nobody ever took what was his. Nobody.”

To this day, I cannot pick up a pair of pliers without thinking about that that man.