Why My Hair Is Brown 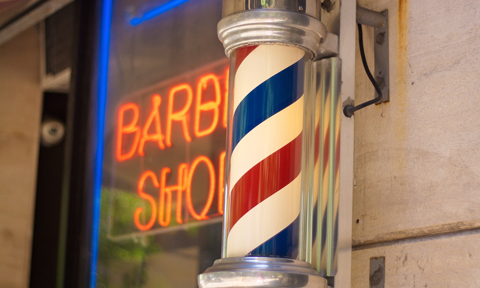 I’m 69 years old and my hair is as brown as it was when I was a teenager. A bit of it, mostly around my ears and the back of my neck, sneaks in as gray, but some Russian barber just buzzes those stray hairs away and I’m back to being a young fella again. I like the Russian barbers. On the Isle of Long, it’s hard to get away from them. I think they’re all related. I move around from shop to shop but they all say the same thing to me: “You have soft hair, like little boy.” And then they laugh. I just shrug.

“You dye hair?” the last barber I visited said. He grabbed a handful and yanked it a bit.

“You sure?” Another yank.

“Hmm,” the barber said and gave another tug.

I try different barbers because all of them think I’m a lying dog. I try to keep moving around but they seem to get together and talk to each other.

Speaking of moving around, I was on the Long Island Railroad heading into Manhattan the other day. I handed the conductor my discounted senior ticket. He stared at it and then at me. “You a senior?” he said.

“May I see some proof?” I showed him my license.

He looked at the date. And then at me again. And the date again.

“What’s your secret?” he said, taking off his hat and touching the gray around a bald spot the size of a tea saucer.

“Humph,” he humphed and moved on down the aisle.

I’ve often wondered about my brown hair and whether it’s genetics or something else. Hmm.

Our daughter Erin, who bought our business in 2016, was telling me a story about the Bosnian heating guy who was on a team doing the hydronic retrofit in her Maryland house. It came time to choose the radiators for her living room. The choice was between sleek, Euro-style baseboard or tough-guy, cast-iron baseboard.

“Which one you want?” the Bosnian asked Erin.

“You’re the professional,” she said. “You choose.”

She got the one that heats her house.

I smiled when Erin told me that story because she and her three sisters grew up knowing that I trust professionals. They also know that I am not the handiest person in the world. Sure, I write about handy people like you for a living, and I know what I’m talking about when it comes to heating because I’ve studied hard and seen much. However, there’s a disconnect between my brain and my hands when it comes to actually doing stuff. I learned that early on by taking several trips to the Emergency Room. I’ve known for years that when it comes to doing things, it’s best for me to hire a professional and then to get out of his or her way. I can always write about it afterwards.

This is natural for me and I accept it. We often talk about young people who want to work in the trades instead of going to college. I encourage that because I know that not everyone is meant for college. And in the same way, not everyone is meant for the trades. Some people are just brilliant at working with their hands and they will have a happier life if we let them find their own way.

I’m the opposite of hands-on. I read constantly and like a maniac, and I learn something from everyone I meet. I can watch tradespeople work with their hands all day long and on into the night, appreciating that I cannot do what they do. But I can write about it.

We are all good at something.

Our house said ouch one day and asked us to buy it a new boiler. We said okay and I hired the best local contractor I knew. This was someone I had hired before. I knew I could depend on him for a great installation and perfect service in the worst weather. I learned that from experience. Our conversation went like this:

“Our house needs a new boiler,” I said.

I didn’t ask him which boiler we were getting, or how he was going to do the job. He’s a professional and he knew what we needed. The Lovely Marianne and I went away for a while so we would not be in his way. I was very smart to have done that. It pays to trust professionals.

I was in a restaurant in Germany with some friends. The waiter arrived. My friend Bob asked the guy him if he spoke English. He said yes and asked if we knew what we wanted.

“Could you just feed me?” Bob said.

“Feed you?” the waiter said.

“Whatever you think is best,” Bob said. “You’re the professional.”

We all laughed at that. The waiter smiled.

“How about you guys?” Bob said, looking around the table. “You want him to just feed you, too?”

We all nodded, sat back, and waited for a thousand pounds of meat to arrive. Keep in mind where we were.

“You think this is risky?” I said to Bob before the waiter returned with his wheelbarrow.

“Nah,” he said. “Who knows more about German food than a guy who works in a German restaurant in Germany?”

“And besides,” Bob said. “He knows his tip depends on what he’s going to bring us.”

The Russian barber put his fingers in my hair, pulled upward, and pointed the scissors at what stuck out.

“Why are you asking me? You’re the professional. Who am I to tell you your business? Just please do what you think is best.” I said.

He let loose a laugh that bounced off his mirror and punched me in the chest.

“You first person ever to say that in here!” he said.

“Yes, everyone come in and tell barber what is best. We do what they say.”

“How does that work out?” I said. He made a face at me in the mirror like he smelled old socks.

“They should just get out of your way and let you do what you do best,” I said. “You’re the professional.”

“Thank you!” he said and smacked me on the shoulder. He turned to the barber in the next chair and spoke to him in Russian, all the while touching my hair.

“I say to my friend this is why this man has brown hair and not gray. He doesn’t worry. He trust people who know what they doing. He has no worry so he has brown hair.”

He pounded me twice more on my shoulder and laughed.

“You first one ever to say that in this shop. First one!”

“It’s always worked for me,” I said. “Well, ever since I stopped going to the Emergency Room.”

“It’s a long story, learned over a long life,” I said. “Just keep doing what you do best. I’ll stay out of your way.”

And he boomed the room with laughter.