Producers of the popular home remodeling show, Operation Build, which airs on the History Channel, had a problem.

The project they were working on – an overcrowded garage remodel for a home in South Florida – had no cooling or heating. After researching their options, they chose the world’s most efficient heat pump for the job.

The RLS3 Series wall-mounted, inverter-based ductless split systems are available in three models: 9,000, 12,000 and 15,000 BTUs. With a SEER of up to 33.0 and an HSPF of up to 14.2, the entire line is rated by ENERGY STAR® as Most Efficient. In fact, the systems are today the most efficient mini-splits in the world.

“We needed something that would really complete a garage makeover,” said Lysa Liemer, exec 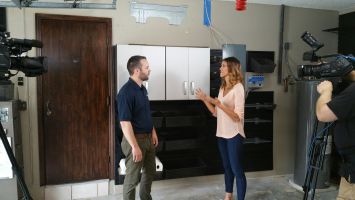 utive producer of Operation Build. “What better than to top the room off with a cooling/heating system, especially here in South Florida when working in a garage can be brutal, considering both heat and humidity.”
The Fujitsu system, and details of the HVAC retrofit for the televised project, will appear in Operation Build episodes to be aired Saturday, April 11 at 7:30 a.m. ET on the History Channel and again Saturday, April 18, at 7:30 a.m. ET.

About Operation Build
Operation Build travels all over the country discovering great home improvement concepts in renovations, remodels, and do-it-yourself projects. Part history, part reality, part building technology, each episode has a project objective where the host, Alexi Panos, and her building team are tasked to complete, while being under a renovation deadline and a homeowner’s need to complete a project on time, before a big event. Whether the team is picking up the pieces and rebuilding after a disaster such as a fire or flood, or coming to the rescue on a remodel gone wrong, the Operation Build team gets the job done.

Producers of the show chose the Fujitsu system based on its operational efficiency, super-quiet operation and for refrigerant pipe lengths to reach 66 feet between the evaporator coil and condensing unit. Of course, the system’s ability to achieve nearly full heating capacity at temperatures of 5°F ambient, and cooling operation down to 14°F, were “over the top,” for southern Florida.