Aeroseal, an innovative duct sealing technology developed at Lawrence Berkeley National Laboratory, is proving to be the first viable solution to chronic ventilation problems plaguing hundreds of thousands of commercial buildings across the United States. The aerosol-based technology’s unique inside/out approach to duct sealing affords it the ability to seal leaks that have been otherwise inaccessible – and therefore unrepairable – using traditional duct sealing methods.

By finding and sealing leaks from the inside of the ductwork, the aerosol technology can quickly and easily locate and seal even the most inaccessible leaks without having to demolish walls, rip open ceilings or disrupt existing structures – a requirement of other duct sealing methods that have, for decades, made ventilation repair unfeasible in many cases.

According to Dr. Mark Modera, a former researcher for the U.S. Department of Energy and developer of aeroseal technology, a large percentage of buildings throughout the U.S. have poorly performing exhaust-ventilation systems. As a result, many of these buildings are operated in violation of building codes, creating health risks, or wasting significant amounts of costly energy.

“It’s estimated that around 80 percent of existing buildings in the U.S. today have ducts that leak 20% to 40% or more,” said Modera. “This is having a significant impact on energy usage and can lead to a variety of health-related indoor air quality concerns. While building engineers have been well aware of the problem for decades, there has been no practical solution – until now.”

Aeroseal technology is applied as an aerosol mist that is pumped throughout the interior of the shaft. Rather than completely coating the walls of the ductwork, the microscopic particles of sealant remain suspended in air until they come in contact with a leak. Here they cling to the edges of the leaks and then to other sealant particles until the entire hole is sealed.

According to Aeroseal LLC, the sole licensee of the aerosol duct sealing technology, Aeroseal is up to 95% effective at sealing leaks in ventilation shafts and air duct systems. Results from its use in commercial building applications have proven that the technology can have an immediate and substantial impact on increasing airflow and reducing energy costs. 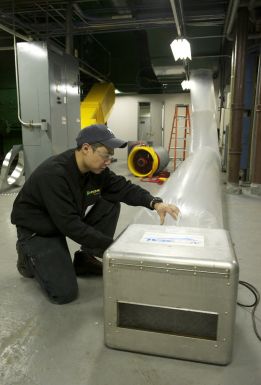 “The property managers of a 23-story high rise apartment building in New Jersey recently found that aerosealing their exhaust shafts and replacing dampers led to a $34,000 annual energy savings,” said Aeroseal’s Neal Walsh. “They are also saving several thousands of dollars more each year through increased heating efficiencies. In another application, Aeroseal was used to improve ventilation and airflow at several luxury hotels located on the Las Vegas strip in Las Vegas, Nevada.

Aeroseal LLC was formed in 2010 to license and promote the use of the aeroseal technology for both residential and commercial applications. Since that time, hundreds of commercial property owners have found Aeroseal to offer a long sought after solution to poor building ventilation.

For more information about aeroseal technology, success stories regarding its use, or information on becoming a licensed aeroseal service provider, visit aeroseal.com, or call 1-877-349-3828.