Making the SteamMax – A Steam Boiler for Modern Challenges 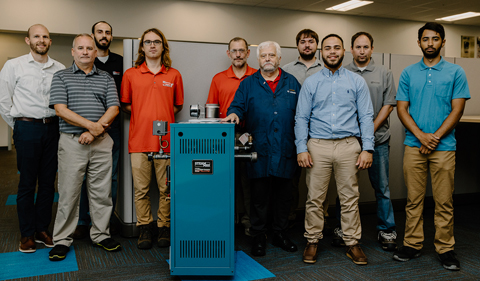 My email signature concludes with a tongue-in-cheek job title of “Dinosaur Emeritus,” accompanied by a graphic of a dying Tyrannosaurus Rex. It’s funny but true; I’ve been in this industry a very long time. Not quite as long as steam heating systems have been in use, but long enough to log a staggering amount of time designing and testing them.

Because exhuming and employing long-gone steam boiler technicians and engineers is impractical, illegal, and not very effective, U.S. Boiler Company thought it would be appropriate for me to take lead on a project that has now come to fruition…creating the new SteamMax gas-fired steam boiler.

I’m proud to say it; over the past three years, Duane Breneman, Craig Eshenaur, Todd Wenger, Cordell King and I, along with the help of half a dozen other lab technicians and our design/drafting team, have designed and tested a steam boiler to address challenges that steam boilers face today. As you’re likely aware, new steam boilers have proven to fail more quickly than older ones. The primary reasons are poor water quality, efficiency mandates that have required boiler section to become thinner and lighter, and leaking steam distribution systems (as a result of their age) that require copious amounts of make-up water which constantly introduces new chemicals and minerals to the steam system.

We designed and built the new U.S. Boiler Company SteamMax boiler, tested it, redesigned it, built it and tested it again. Once we had final prototypes, the boiler went through 6,000 hours of alpha (laboratory) and beta (field) testing. The beta tests took place in areas of the country that have the worst water quality available. After that kind of “torture”, we’re confident that we’ve created a real winner.

I’ll explain how the SteamMax is different, but in doing so, I need to explain what goes on inside a steam boiler.

As boiler efficiency standards rose, manufacturers extended the heat exchanger surface (and heat transfer pins) above the water line. This causes constant wetting and drying at the boiler’s most vulnerable area – the pins just above water line. This is OK in a pH range of 7-8, but many systems today have more acidic water. Then, as manufacturers got competitive, they raised the BTU input of those boilers by using higher input burners. This made the space above water line very violent. Lots of turbulent water equals faster wetting/drying cycles. Now add chlorine from poor water quality. We like the salt on the roads in the winter, but steam boilers do not like the resulting chemicals and minerals that end up in our water.

When the area above the water line dries, the water evaporates and leaves the chlorine behind. We’ve seen test sites with water pH as low as 3. Any rust that forms is attacked by the hydrochloric acid (from the chlorine), exposing new cast iron and the process begins again. This can happen very quickly, especially in places with notoriously poor water quality, like the I-95 corridor through the Mid-Atlantic. In extreme cases, steam boilers can rust out in a single year, regardless of boiler size or brand.

When contractors are not diligent about fixing system piping and vent leaks, the system’s makeup water increases, raising the concentration of system chlorine and, subsequently, the opportunity for chlorine to attack cast iron increases.

To quote Thomas Edison, “We now know things not to try.”

Enter the new SteamMax, which as mentioned, is built to address challenges plaguing steam boilers today. At 82% AFUE, it meets all Department of Energy requirements. So how did we do that and make the design less susceptible to poor water condition attacks?

Most significantly, we increased the disengaging area. This is the area inside the boiler where bubbles rise to the water line. In typical steam boilers, the water surface is very violent, but in the SteamMax, the water line is very stable.

The steam chest has been enlarged, which provides higher efficiency and allowed us to remove the heat transfer pins closest to and above the water line. By removing those pins, we were able to remove the greatest opportunity for chemicals to corrode the cast iron. We also widened the water ways, which makes the boiler less susceptible to liming. Lime looks like scale, and it sticks to the crown sheet. The crown sheet is the bottom of the water chest, closest to the burner, making it the hottest surface inside the water chest. When lime builds up here, it insulates the water and reduces heat transfer. In extreme liming cases, the iron of the crown sheet can crack from excess heat; reducing lime buildup was a key consideration during the design phase.

If a boiler’s steam chest (above the water line) is too short (which is the case with most modern steam boilers), water can be forced into the header. This is called “priming and surging.” It can throw water into the header and piping, making the boiler’s LWCO think that the water level is low. To avoid these problems, our team lowered the waterline. There’s now more room in the steam chest above water line. To further reduce priming and surging, the number of steam risers has been increased to slow the velocity of the steam leaving the steam chest, making it less likely to carry water with it.

Steam boilers traditionally use an inexpensive lance port burner, which (with a downdraft) can, in some cases, “flash back.” This is combustion within the burner tube itself. When gas ignites at the burner inlet (sometimes called helmholtzing), it makes objectionable noise and can lead to burner damage. To avoid this issue altogether, The SteamMax features a very high-tech stainless steel burner. Instead of a lance port burner, the new burner looks similar to what you’d find on a high efficiency condensing boiler. 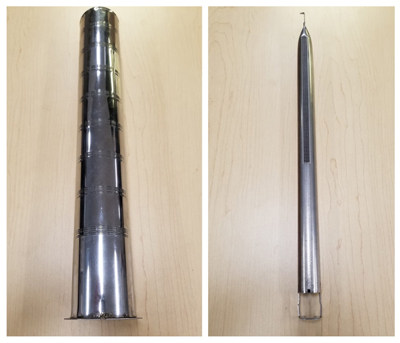 Second only to durability, ease of installation was a big consideration during the SteamMax design phase. Increasing the steam chest obviously means increasing the dimensions of the boiler. Compared to U.S. Boiler Company’s Independence steam boiler model, the width of the boiler is the same per input. While the SteamMax is deeper, all models (75 to 550 MBH) will fit through a 30-inch door.

As building codes now require redundant LWCOs, the SteamMax includes two complete sets of tappings. This allows the installer to meet code without running additional piping. These tappings are located on both the left and right side of the boiler for installation flexibility.

The SteamMax is also available in complete knockdown (CKD) in all sizes, so steps are not an obstacle. Code compliance is available for standard or CSD-1, which is becoming more common in some cities. We provide draw-up tools with our CKD offerings.

For more information about the specifications and dimensions of the SteamMax boiler, click here to review the product data sheet.

“Masterpiece” might be a bit self-aggrandizing, but we believe this boiler is what the industry has needed for quite some time. To my knowledge, no boiler manufacturer has invested any major funds in gas steam boiler development since the early 90s. Until now.

We performed a full year of alpha testing in the lab before a full season of beta testing in the field. We installed the SteamMax in the worst water conditions we could find or create. The verdict was clear; SteamMax excelled… exactly as it was designed to.

I’ve learned how to walk downstairs by not falling down them. What I mean by that is, only through experience have we been able to address all of the issues that needed to be resolved and create an all-new steam boiler built specifically for the harsh operating conditions that are common today.

Ed Johann (Senior Engineering Advisor, U.S. Boiler Company Aka Dinosaur Emeritus) started his career as a physics research scientist. Early on, he worked in the combustion field, taught at the University of Wyoming, and was responsible for some contract nuclear development. Johann entered the boiler industry in 1980 and now holds several patents in combustion and heat exchanger design. He joined U.S. Boiler Company in 2015.