It’s one thing to develop a massive, 53-foot long exhibit trailer to be pulled behind a polished big rig cab.  It’s quite another to learn that HVAC manufacturer, Modine – now celebrating its 100th anniversary – has spent the past year developing the impressive learning-lab-on-wheels that made its debut at this year’s AHR Expo.

The kicker is that the gleaming behemoth rolled out from Orlando, after the show, to begin a 10,000-mile, cross-country tour of North America – branded The Innovation Tour.

According to Ray Schaffart, Marketing and Sales Support Manager, Modine’s Innovation Tour is a traveling road show that will take the manufacturer’s technology to the front doorsteps of thousands of allied trade professionals – architects, engineers and design/build contractors – who might otherwise miss the chance to see the gear in action, and to speak with Modine pros. 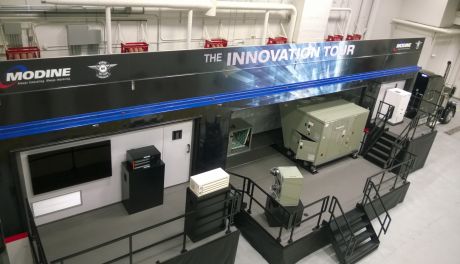 “After its premier at AHR Expo, the rig moved out on its 2016 North American tour of 46-cities,” said Schaffart.  “From Savannah to Seattle, Denver to Detroit, Toronto to Charlotte, and many places in between, the Innovation Tour is designed to showcase Modine’s complete line of heating, ventilation and air conditioning systems, solutions we’ve been hard at work on for 100 years. It also emphasizes Modine’s commitment to the Building HVAC markets, an area we are targeting for significant growth”

“But it’s not just about product,” continued Schaffart.  “We’re awarding free CEU and accredited NATE courses to make the experience that much more rewarding.”

Schaffart explained that with Modine’s newly-diversified products and technology, the time was right to launch this tour.

“As the company celebrates its 100th anniversary, it’s a perfect time to promote our broader technology,” added Schaffart.  “We’re very well recognized when it comes to unit heaters, but it’s time for new outreach among prospective buyers and specifiers. We want to be top-of-mind for our engineered solutions as well.”

Information about The Innovation Tour, as well as all tour dates, can be found on www.modineinnovationtour.com.