The award’s inaugural presentation to its namesake, Dan Holohan, was called, by White, “just one small token of appreciation for a lifetime of tireless commitment to improving the trade and – in no small measure – homeowner, and business employee comfort, nationally.”

The award will be given each year to an HVAC professional 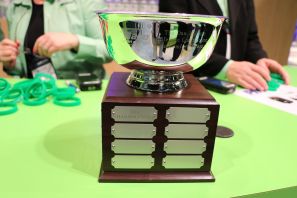 or company that has made a substantial contribution to comfort technology, advancement, or training while displaying the exceptional good humor and love of people exhibited by Dan Holohan throughout his long career.

“In essence, this award becomes an extension of who Dan is,” White later explained.  “After all, Dan is now retiring after 46 years in the industry.  Those of us who’ve known him, and many people have, know Dan one of the greatest, most selfless and caring folks in our business.”

Holohan said that “I’m just so fortunate to have had such a long and exciting career, one with so many friends and fine memories.  But now it’s good to get off the road and to relax.  I envision the day when someone will ask, ‘Who was that guy?’”

The answer to that question, in part, will be the legacy of this award.