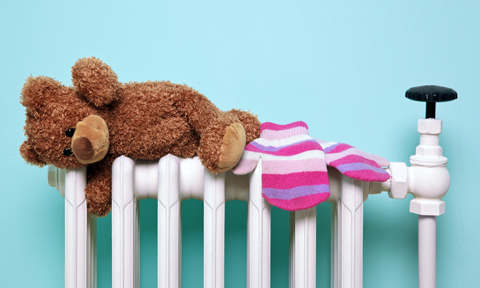 I spotted this question on The Wall at HeatingHelp.com. It was from a brand-new parent and it made me smile because brand-new parents think they can control everything their brand-new child does. They have not yet begun to realize that children have a keen sense of things that can hurt them and they just can’t wait to find out by how much.

Jodi, the brand-new parent wrote, “Anyone out there have any experience baby-proofing recessed convection steam radiators? We have a den that we want to turn into a playroom for our 6-month-old, who will be mobile soon. This sizable recessed radiator, similar to the attached photo, is in that room. We thought about using a fireplace screen, but I'd prefer something more permanent that won't chance tipping over.”

She posted a catalog photo of the recessed, cast-iron convector, one that is quite common in houses of a certain age.

I was smiling because Jodi’s question made me think back 38 years to when our first daughter, little Miss Kelly Holohan was two years old and both curious and quite imaginative. The Lovely Marianne and I took her into New York City to visit my mother’s mother, who had arrived from Sicily a very long time ago and still couldn’t speak English. Her husband, my grandfather, owned a shoe-repair store on the first floor of the five-flight, walkup, tenement where they lived on East 93rd Street in Manhattan. He thought that the best place for his wife was up on the fifth floor behind a locked door with the kids. It’s difficult to assimilate from the fifth floor so she went to her grave after spending 75 years in Manhattan speaking only Italian. Imagine that.

My grandfather died the same week JFK died and my late Aunt Rose, one of the five children that survived childhood, spent the rest of her life caring for her mother. Aunt Rose never married and when the time was right in the late-‘60s, they both moved out of the tenement and into a brand-new NYC Housing project on First Avenue overlooking the East River. It was lovely for a time.

Rose, however, used to get what she thought of as obscene phone calls on the wall phone in the kitchen so she kept a police whistle on a beaded chain near the phone and she would blast it into the callers’ ears. The whistle, of course, caught young Miss Kelly’s attention, so Aunt Rose picked it up and blew it. This scared the drawers off of Grandma but it made Miss Kelly laugh and that’s what mattered. Aunt Rose, being someone who never had to live with a two-year-old, handed the whistle to my dear daughter who put the chain around her neck and started to parade around the tiny apartment like a New York City cop on patrol. What could go wrong?

So we’re sitting there in the living room, talking to Aunt Rose and trying to make sense of what Grandma is saying in Italian.

And that’s when I heard the pop, saw the flash out of the corner of my eye and watched a screaming Miss Kelly fly across the room.

Marianne and I were on her in an instant. She was sobbing but otherwise in one piece. She pointed at the emergency light that was now half-plugged into the wall socket and she screamed, “Bad!” And that’s when I noticed that the beaded chain with Aunt Rose’s whistle was still around Miss Kelly’s neck, but a part of it was burned.

And this is what kids can do: In the time it took for us to chat about two-dollar shoes, our precocious daughter had pulled the emergency light halfway out of its socket and then draped the metal chain across the two exposed prongs to complete the circuit.

Why would she do this? Because she was a kid, and part of a kid’s job description is to make her parents old.

But you know what? Miss Kelly never did that again, nor did she touch another outlet. She learned her lesson and survived. She’s a mother of two now and she rolls her eyes when I tell her that story. She’s had a few similar scares with her own miniature daredevils.

As for us, three more daughters arrived during the next two years (we cheated and had twins the last time around) and each challenged us but never quite as dramatically as Miss Kelly had. I remember when the twins agreed to play a game of human dominos with little Michael around the corner. It was his idea, the tiny monster. The first round put Miss Erin in the Emergency Room when her face smashed into a car bumper; but the twins learned that humans are not dominos from that experience and they never went back there again.

Most kids learn. Most kids. Little Michael, not so much.

But about that radiator.

One of the Wallies suggested a wooden radiator cover and Jodi said she thought about that, but wondered if there was a better solution. Something prettier.

There was a pause for a bit and then another of the Wallies wrote, “I'm not going to tell you what to do, but I will tell you my opinion. I have free-standing, cast-iron radiators on my steam system. The worst thing that happened to any of my three children was when my oldest tripped and pounded his head into one of the radiators when he was two-years old. I think that if you teach kids from the very beginning to not touch radiators they won't touch them. And if they don’t listen, their autonomic nervous system will pull their body part back long before there is any danger of burning. However, if your child has some sort of nervous system dysfunction that would be a different story.”

Another Wallie posted this: “I grew up in an old house with steam and we still live there. I learned the first time I tried it to never touch any piping or radiators while they were hot.”

Following that was another who said, “My oldest daughter and son-in-law bought a 100-year-old home with radiators just as old. My granddaughter touched one of them, once. That was it. Game over. She keeps her distance now.”

And then one more: “It’s much better that the little ones learn this sort of thing when they are young learning quickly rather than when they are teens and think they are invulnerable and immortal.”

Jodi then wrote, “Maybe we don’t give our kids enough credit.”

I like that. Maybe we don’t. She sounds like a good mom, doesn’t she? And I have a feeling she’ll be watching closely as her child starts to walk. “No, no, don’t touch that goes a long way” when said firmly with love, caring, and often enough.

And all of this made me think again of my long-gone, shoe-repairing Grandpa who once said to me when I was a little boy. “Blessed is he who sits on a hot stove for he shall rise.”