Not All Pipes Are Round I was in a hotel in Stockholm, Sweden when I first noticed the way the Europeans run their pipes. It was wicked cold outside and there was a panel radiator with a thermostatic radiator valve under my hotel room’s window. The TRV was locked at about 65-degrees, so I used my Swiss Army knife to recalibrate it to my greedy needs for more heat. Ugly American.

The pipes running to and from that radiator hugged the corner where the wall met the floor and I thought this was really strange, being from New York and all. We're not used to seeing pipes. We seem to be ashamed of them.

I asked a Swedish engineer I met the next day about this flagrant showing of the pipes, and he told me that they install the pipes inside the room so that they won't freeze, and also so that the heating professional can get at them, should there be a problem. "You put your pipes in the walls, don't you?" he asked. I nodded. "You must have problems with freezing when it gets very cold," he said. I explained that fixing frozen pipes is an entire industry in our country, and that many people depend on this for their livelihood. It's an American tradition.

He thought that was pretty funny. So do I.

Years later, I found myself in a suburb of Frankfurt, Germany. A few friends and I were in the office of this big design/build firm. We were visiting the big ISH tradeshow that year, and were on a side trip to get some insight into how the Europeans design their hydronic heating systems. The fellow who was lecturing us that day did so in German, but we had a translator with us, and he was a huge help.

This was the day that I learned that the main difference between them and us is that they focus on pressure differential while we focus on big flow rates. They run little pipes from the boiler to manifolds, and they then connect their panel radiators to the manifolds. The radiators all have thermostatic radiator valves. They run continuous circulation between the boiler and the manifolds, and they let the TRVs modulate the flow between the manifolds and the panel radiators. They also install differential-pressure regulators between all their supply and return lines so that the TRVs can throttle without backing the circulator up on its curve. That solves the problem of banging control valves and velocity noise, both of which are also American traditions.

During a break, I wandered over to one of the panel radiators that were under the window of this large conference room. 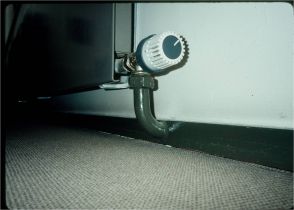 The radiator had a TRV, of course (they're required by law for rooms larger than eight square meters in Germany), and the supply and return pipes looked like they were going right through the wooden base molding and into the wall. I thought that was strange, especially since the building was old and the walls were made of concrete, so I asked about it. "Why do the pipes go into the wall?" Our translator turned to our host and repeated my question. Our host looked confused. I pointed and gestured. He started laughing. Then he explained, through our translator. "The pipes do not go into the walls," he said. "That is the pipe." And he pointed at what I had thought was wooden base molding. It wasn't molding. It was a pipe.

Translator, back to our host. Host nods.

"Why is the pipe square?" I asked.

Translator back to him, and then back to me.

"The pipe is square because the corner is square."

Turns out, this square pipe ran around the perimeter of the office building, feeding panel radiator after panel radiator, much like we would do with a diverter-tee system here in America. One of my traveling buddies looked at this and chuckled. "They must have some sort of diverter tee in there," he says. "Otherwise, water won't flow from the square pipe into the radiator." I nodded. "Ask him," he said. 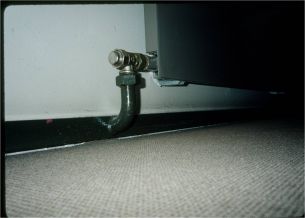 Now, our host didn't understand the concept of a diverter tee, so I grabbed a pen and paper and drew what I thought was a pretty good sketch of a one-pipe, diverter-tee system. Our host looked at it, mumbled something nasty in German and scowled at me.

"Hey, Dan," my buddy said, "that was a really stupid question."

Turns out, I was showing our energy-conscious host an American system that is designed to waste electricity by having cumulative fixed resistance built right into it from the get-go. Diverter-tee systems lead to piggy pump selection. Bigger is better. You know, another American tradition.

But I soon learned that the pressure drop through a panel radiator is so slight that the water favors it over staying in the square pipe. Who knew?

Then my buddy whispers, "You know what, Dan? This job can't possibly work because the water from the first panel radiator is cooling the supply to the next, and so on. Just look at it. They can't run supply water hotter than about 155-degrees to start in this country. It's the law. So how the heck are they going to heat these offices especially the ones at the end of the loop?"

"Ask him," he whispered back.

"But he already knows you're stupid," my friend said. "Why should I get involved in this? Just ask him."

So I did. And that's when our host took us to the basement and showed us this most wonderful hydronic bouquet, made up of a circulator, a four-way valve, a switching relay, and a timer. It begins by circulating water clockwise through the loop of square pipe feeding the panel radiators. After a half-hour, the timer shuts off the circulator and the relay reverses the position of the four-way valve. Then the circulator restarts, but now it's moving the water in the opposite direction around the big loop. The supply water goes this way and then that way, and everyone upstairs stays cozy.

You could have fit a softball in my mouth.

We've since used that piping arrangement a bunch of times on the Wall here at HeatingHelp.com . Some guy will pop in and proudly proclaim that he just did his first radiant job. He buried a thousand feet of 3/8" PEX in concrete and he now needs to know what size circulator he should use. One of the Wallies will ask, "How many circuits did you use with that thousand feet?" Our new friend will say, "Circuits?"

We will then explain that to flow through a thousand feet of skinny, buried-in-concrete PEX he can either stop by his local firehouse and see if they can help out with one of their big pumper trucks, or he can use the four-way valve, timer, relay, and circulator trick to get out of the hole he dug for himself. It usually works.

But we weren't done on that day in Germany. When we got back upstairs, my buddy's eyes lit up. He mentioned that every other half-hour, water will be flowing backwards through the TRVs on the panel radiators. "This job can't work," he whispered. "A TRV will sound like a machine gun if you put it in backwards, and that's what this guy is doing every other half-hour. Tell him it can't work."

So I mentioned how the job can't work to our host, and he explained how differential-pressure regulators keep TRVs from hammering, and then he shook his head sadly, and called me bad names in German.