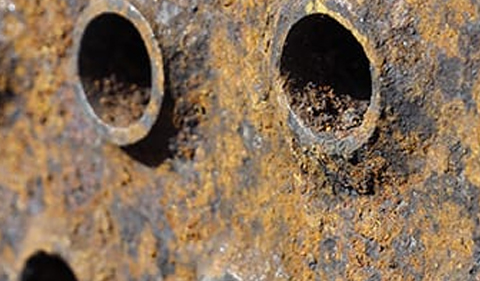 Clogging up heating surfaces is sort of like having all the traffic lights in your town turn red at the same time, and then stay red. Most movement just stops. In the case of boiler sludge and scale, that movement is heat. It's trying to get from the fire, through the metal, and then onto the conveyor belt of flowing water but sludge and scale can block the way. So the boiler just keeps getting hotter as the building gets colder, and that's not good for either one.

Simply put, pipe sludge is nothing more than rust that flakes off the inside of the pipes. It will just go with the flow into the places that will cause you the most grief. Get enough of that sloppy stuff flowing around and it will gum up the whole works.

Mineral scale is different. In a boiler, it's mainly stubborn calcium carbonate, which never wants to dissolve in hot water. Behind this scaly pest, other minerals will line up, hold hands, and insulate the fire from the water. That hand-holding happens in this order of appearance: calcium sulfate, magnesium carbonate, iron, silica and manganese. And you can add to that menu, phosphates and hydroxides of any of those minerals that just want to ruin your day. It pays to know the enemy, and the only real way to do that is to get the water analyzed if you suspect there's a problem.

It also pays to understand the simple magic that creates scale. Think of a hot cup of coffee. You add a spoonful of sugar and give it a stir. The sugar instantly dissolves, and the hotter the coffee is, the quicker that will happen. That also happens with salt, but if you’re putting salt in your coffee you probably have problems worse than boiler scale. The important thing to know is that sugar and salt will dissolve in hot liquids.

The minerals that cause scale in a heating system do just the opposite. They are inversely soluble. That means that the hotter the water gets, the less those minerals will want to dissolve into the water. And since the inside of a boiler is pretty hot, scale is very happy to call it home.

And where do those minerals come from? They’re in the cold feed water, which comes from rain that rolls downhill all over the planet. And since the planet is made largely of minerals, the minerals look at the flowing water as its means of getting from here to there. Keep in mind not many contractors will fill their heating systems with pure water and most contractors are not adding chemicals that get rid of the minerals. They just open the feed valve and let ‘er rip. So the burner runs and the minerals come out of solution as the water gets hot. They cling to the hot surfaces on the inside of the boiler and do a fine job of insulating. That's when the traffic lights start turning red.

Most hydronic systems are closed to the atmosphere, so if there’s a lot of scale, suspect that too much water is probably entering the system. Close the automatic feed valve and watch the gauge. If you're losing pressure, the system has a leak. Go find it and fix it.

He didn’t want to believe that was possible.

Watch your circulator location, especially on commercial jobs. If you're pumping toward a compression tank, the circulator will show its differential pressure as a drop in suction pressure. If the circulator's ability to produce differential pressure exceeds the system's static fill pressure, the pressure at the pump’s suction will be sub-atmospheric. If there are automatic air vents nearby, they'll suck in air, and that will cause the ferrous parts of the system to rust and flake off. Say hello to Mr. Sludge.

If you suspect the system is getting too much air, take a water sample and dip a magnet into it. Iron particles will stick to the magnet and you'll be on your way to the solution. I'm a fan of the new hydronic dirt separators that include magnets. It's amazing what those neat devices will pull out of the flowing water. And if you’re selling ECM circulators, you absolutely need a magnet in that separator. Without it, the sludge will wind up clinging to the circulator motor’s permanent magnet.

Scale can cause lots of problems in steam boilers, especially if it’s a process-steam boiler and some or all of the condensate gets dumped (think bakeries). Lost condensate means lots of fresh, cold feed water, and that brings in the calcium and magnesium, which will cling to the hottest surfaces of the boiler, slow heat transfer, raise fuel bills, and cut years from the life of the boiler. Some think this is unavoidable, but it's not.

Here's how to shine if you run into this one: A bakery needs a replacement boiler. They’re using this boiler to put steam into the oven at a certain moment in the baking process. That’s what makes the bread’s crust crispy. Yum! None of that condensate comes back, so the cold feed water is eventually going to kill that boiler.

One more trick: On the hot-water feed line from the water heater to the boiler, install a microbubble air separator, the same sort you'd use on a hydronic heating system to get rid of those tiny bubbles. Run your hot feed water through the separator and it will act like an inexpensive deaerator, removing the air before it hits the boiler. You’re beating both scale and sludge with this trick. Now go amaze your customer with your new-found street smarts.

A bit more about sludge. It will often wind up in the radiators if the hardness in the water gets a chance to react with any phosphate or alkaline treatments someone may have added to the system. Sludge looks and acts like paste, and it will murder heat transfer. If the hot water flowing through the radiators can't pass its heat to the air, the rooms will go cold and the heating bills will soar. So take care in adding chemicals to any hydronic system, unless you know what you're doing. I've often watched contractors pour chemicals into boilers because they were frustrated with a problem, and they thought the product had a cool name. They usually over-apply whatever treatment they’re using, believing that if one pound of sugar is sweet, well, then 10 pounds of sugar is 10 times sweeter. It's not, so know what you're doing before you do it.

Let’s finish with a few words about bouncing boilers. Have you ever been near one of those? They’re scarier then Stephen King. I once visited a cast-iron boiler that served a system that was leaking through buried pipes. The fill valve had added a lot of fresh, hard water. The minerals that arrived with the water did their inversely soluble thing and clogged a good part of the boiler's internal passages so that the water couldn't flow through. But the burner kept firing. Steam formed, expanded like crazy and then collapsed within the clogged boiler section. It did this again and again, hammering away at the boiler's gut so violently that the boiler was doing an Irish step dance on the basement floor. Had I not seen this I would not have believed it was possible. I hit the off switch and got the heck out of there. I hope you would have done the same.

Time for a new boiler.