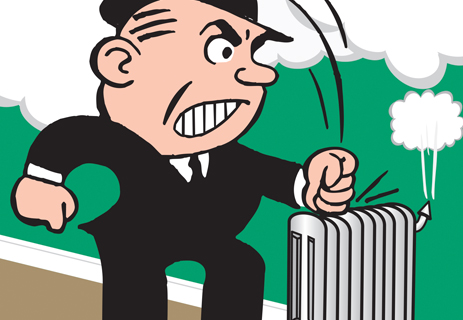 If you look at the pipes in your old steam system you’ll notice that most of them are made of black steel. This was the standard in the old days. Nowadays, some contractors like to pipe replacement steam boilers in copper rather than steel because they can solder copper joints, but they have to thread steel pipe together. Threading involves more work than soldering so it’s more expensive. When a contractor quotes you a price for any steam work (a new boiler or any piping within the system), ask him what type of pipe he plans on using. I think steel pipe is much better than copper for steam heating work, but like I said, it does cost more to do it this way. I think it’s well worth it, though, and here’s why.

Copper expands much more than steel, and that’s an important consideration, seeing as there’s so much twisting and turning going on in these systems. That’s what those odd pipe angles are all about. They allow the pipe to expand and contract and twist without upsetting the pitch needed for proper condensate drainage. If the pitch isn’t right, you’ll wind up with noisy water hammer and uneven heat (and high fuel bills).

When a contractor uses copper tubing instead of threaded steel pipe for those special angles, and then solders the joints together, the twisting from expansion and contraction will often cause the pipes to come apart over time. The problem generally shows up shortly after the guaranty period runs out.

But you did get a good price.

And this problem with expansion and contraction is especially critical within the near-boiler piping. The contractor that quotes your job based on using copper for the near-boiler piping is doing himself a favor, but he’s certainly not helping you. I’ve seen too many of these jobs come apart over the years to believe otherwise.

Another problem with copper is that it leaches out and into the boiler as time goes by. This can cause dielectric corrosion within the boiler, and that shortens the boiler’s life. You wind up buying another boiler.

But you did get a good price.

My feeling? Pay a bit more and have it done the right way. After all, how many times in your life will you be replacing your steam boiler?

True story (it happened in Northern New Jersey). A contractor gets a call from a woman who wants him to quote on replacing her steam boiler. He measures all the radiation and looks over the entire job. He asks her about any problems she’s had with the system and he talks to her about her comfort needs. Then he gives her a price and she tells him she’ll get right back to him, which she doesn’t do.

A few weeks go by and the contractor figures that she must have gotten someone else to do the job. But then she calls, and she’s in a panic. She pleads with him to come over right away. It’s an emergency!

So he drives to the job and races up the front walk. She’s waiting for him by the door and she hurries him in. The house is filled with steam. He’s confused. She leads him to the basement steps. “Hurry!” she says. “I didn’t know who else to call. The other guy refused to come back. He said he was too busy.”

But she never thought about that. She just wanted a good price.

This is an excerpt from Dan Holohan's popular book We Got Steam Heat!: A Homeowner's Guide to Peaceful Coexistence.