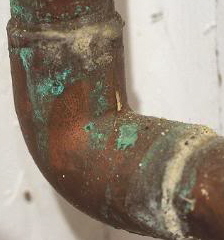 I asked this question on The Wall:

When do you think you need to protect against electrolysis corrosion from stray electrical current, and corrosion caused by dissimilar metals? In all cases, or just some of the time? How about retrofits to solve corrosion problems? Did it work every time for you? Any frustrations? Thanks for sharing what you've learned.

Here are the comments:

Bob "Hot Rod" Rohr: One of the key components to electrolysis is the conductivity of the water, or fluid being used. Water with a high mineral content, or water softened by ion exchange will show as a high TDS (total dissolved solids). The more conductive the fluid, the more potential for electrolysis. I would suggest installers and troubleshooters invest in a meter to check the TDS of the fluid, and if necessary, reduce or eliminate the components in the fluid that contribute to high conductivity.

I work for Caleffi, and I invite you to read the information Caleffi provides in Idronics 18 Look for Galvanic Corrosion, which begins on page 14.

Stephen Minnich: I'm not an engineer, and I've certainly never done any studies on it. But over the course of a fairly long career, while using dissimilar metals in a leak-proof, closed system; and seeing many, many other systems where others have done the same, I've yet to see any corrosion as a result of it.  My .02 cents.

Gordy: I'll have to agree with Stephen on his own observations. It does take the right combination of things to occur, as you can see in this article.

SWEI: We test the water if it's not from a known source. No major problems on new jobs since we have control over things like air ingress, make-up water and pH, and we almost always use some sort of conditioner.
We find the "interesting" problems on service calls and retrofits. Again, first we test the water -- at least for pH and TDS.

MikeSpeed6030: If there is a problem with galvanic corrosion caused by dissimilar metals, then you might consider dielectric unions. However, there are a few problems. My gas-fired water heater (installed by an experienced, union plumber) has dielectric unions between the copper cold- and hot-water pipes and the water heater. But, a black-steel gas pipe connects to the heater, and the gas piping is grounded. The heater itself sits on steel legs and rests on a concrete basement floor.

My home's water piping, mostly galvanized steel but some copper, including the supply from the city's curb, is grounded - and it is connected to my steel boiler (which is 60+ years old, and working fine).

The National Electrical Code requires that any metal piping that could conceivably become energized, be grounded. My city-water supply arrives from a buried copper pipe, so it is obviously grounded. But, I have to have a solid-copper jumper wire around my inside water meter in case someone removes the meter for maintenance, in which  case, the downstream side would become electrically energized.

My point is that it is very difficult, if not impossible, for me, to isolate dissimilar metals. Everything winds up being connected together, electrically. The only way, I think, would be to build a new house with all plastic pipes. In my area, the gas company uses plastic on their buried supply up to the regulator and meter, which are made of black steel.

The electromotive series shows iron at -0.48V and copper at +0.345V. Apparently, that differential isn't enough to be a big problem. Until I hear of steel pipes or boilers and water heaters rupturing due to galvanic corrosion, I will probably not worry too much. The electrical code requires a copper ground rod to be installed at an electrical service entrance. So everybody has copper connected to their steel piping.

Solid Fuel Man: In northern Maine, I have only seen dissimilar metals create electrolysis in open systems where galvanized pipe is threaded into copper. Generally, that is in a water heater. I have a few installs approaching 15 years where I used a brass coupling and threaded a male copper adapter into one end and the galvanized into the other with no signs of leakage yet. I wonder if it has to do with a female copper adapter threaded over a ferrous metal. If it's copper threaded into a ferrous metal I never see a leak. I wonder if it may have something to do with female copper adapters stretching.

MikeSpeed6030: Copper is relatively ductile while steel isn't. I can visualize a female copper threaded fitting, over a steel fitting, creeping. I don't think this is necessarily due to galvanic corrosion. Probably best to use brass female fittings in that situation. Brass is stronger and can be soldered for a transition to copper pipe.

SWEI: Same here, but I use mainly 304SS couplers because they're half the price of  lead-free brass. Copper female adapters are still useful for transitioning to PVC pipe. The best route we have found is to cut a threaded Schedule-80 PVC nipple in half and glue that end into a PVC fitting. This eliminates the problem of Schedule-40 PVC threaded male adapter snapping off. The PVC is not hard enough to oval out the copper female adapter.

The real problem with copper female adapters is installers who insist on using 24" wrenches for 3/4" fittings.

Chris J: I use a 12" adjustable on them, but I've never felt I could really trust the joint I was making, like I do with the couplers + male adapters. I had a leak recently with a street fitting I swear it was a 45. First leak I've had in a long time, and it was in front of my dad when I did his recirculating hot-water line. I would've rather it happen on live TV, as long as he didn't see it. It was just a pinhole that was spraying lightly on the block wall, and I almost didn't even see it.

Solid Fuel Man: Copper-female-adapter stretching is exactly what I was talking about. Seems the leaks at the transition where a female copper adapter is used could be mistaken for electrolysis.

MikeSpeed6030: Our buried water service from the street, installed in 1952, is copper. Once inside the basement, it connects to a galvanized-steel, threaded fitting, and from there to galvanized water piping throughout the house. In 64 years there have been no problems. A few years ago, I disconnected that steel-to-copper joint to replace the original gate valve shutoff with a ball valve. I had no problem disconnecting the threaded joint and I saw nothing that might be galvanic corrosion of the steel fitting, which I reused. The water main in the street is cast-iron or coated steel; I'm not sure which, but, my copper service line connects to the main somewhere or another.
We have hot water heat. All the original hydronic piping is threaded black steel, but for a later room addition, copper piping was used. No problems so far.

EBEBRATT-Ed: Anything buried in the earth is subject to current flow if it is metal. The earth is basically a big battery because of the water and chemicals it contains. There is a lot of stray current flowing through it, and that's why we provide underground oil tanks with cathodic protection.

aircooled81: Separate the conductors and you'll break the conduction. I believe that when dissimilar metals leak at the point of connection the cause is sometimes the different expansion-and-contraction rates of the metal.

Dielectric unions are a great idea, but not for long-term use on hot-and-cold, domestic-water pipes. I find these to leak over time because the plastic sleeves break down. Look inside one old one next time you pull it apart; you'll see a mountain built-up at the steel connection.

I love CTS Flanges. The dissimilar metals come in contact only through the bolts, and not the fluid. I can't remember ever finding a corrosion point from, say, steel-to-copper with these.

I don't think using six-inches of brass to break electrolysis works. I won't stop the exchange of ions. It's probably that brass won't corrode as quickly as something with iron in it when water is present, so it just takes awhile longer to deteriorate.

If your line becomes conductive, the grounding point will be where the metal breaks down. Maybe that's why you see dissimilar-metal fatigue at the threads. Teflon tape blocks some of the thread's grounding contact point, so the conduction through the few edges of thread touching the dissimilar metal have increased electrical current.

Frequency drives, or anything like a motor in the loop that creates electric- and magnetic fields can be a problem. Motors create frequencies that we can measure. This potential travels through the motor windings and into the motor shaft down into the impeller and volute. If it doesn't go through the bearings, then the EMF can transmit into your piping system on its way to a grounding point.

I silver-braze copper-pipe-to-steel compressor connections often.  I've seen equipment that's 30 years old with these connections. Refrigerant vapor passes through that connection for hours each day, and yet there is no dissimilar-metal corrosion. The leaks I've seen are usually due to a poorly done solder joint.

Larry Weingarten: Hello: Reading Dan's question, I see it could apply differently to open and closed systems. I've got pretty hard water here in Monterey, CA; so, with open systems, salt-softened water can greatly speed up copper corrosion and anode consumption in water heaters. Standard dielectrics can fill with rust in one to two years. "Modern" steel pipe fails before the old pipe it was installed to repair.

To prevent problems around water heaters, I bond and ground everything and use lined steel nipples in the tank to copper- or stainless flex connectors that have true dielectrics built in. I once had a commercial water heater that lasted only four months! It was stray current, and I fixed the problem with a little six-gauge copper wire. Corrosion is an important topic for us all to understand. NACE  is a good resource.

And Dan, it might be entertaining to have a look at this report from NACE: It's about the cost of corrosion in the US. They throw around billions the way I throw abound fivers!