How to Size Circulators In 1970, I went to work for a manufacturers rep on the Isle of Long and I fell in love with hydronics. We sold Bell & Gossett and one of the elder salesmen took me aside one day and taught me about the marble.

"When you're sizing circulators, or even when you're just looking at a hot water job," he said, "you should imagine that you're inside the pipe, rolling from one end to the other like a marble." I nodded and smiled. This was something that I could see in my mind's eye. "And whenever you get to a tee," he continued, "just ask yourself which way would you go if you were a marble."

"How will I know which way is right?" I asked.

He was giving me the essence of what engineers call delta-P, or pressure differential, and I liked his way because I really could feel it.

They had me working inside then. I was one of the guys on the phones. I would take about a hundred calls each day and many of them went like this:

"Yeah, listen. I got this pump and it ain't working. I got to get a new one and I need it in a hurry."

"What can you tell me about the pump?"

"Uh huh, and what else can you tell me?"

And so we'd take it from there. I'd try to coax more information out of the guy. What was on the nameplate? Oh, there was no nameplate? How about on the motor? Could he get the horsepower rating? Can't read that either, eh? OK, how about the size of the flange? Or the length of the circulator from one end to the other? And the centerline between the flanges?

So I'd think about that marble. Which way would I go if I were rolling through the pipe? I liked to think of my marble as being large enough to touch the inside walls of the pipe. Big enough to feel the friction as its sides rubbed against the insides of the pipes. Friction loss. Delta-P.

And there was also flow rate to consider, of course. I knew by this time that heat traveled on flow like a passenger on a train, and the more flow there is, the more heat there can be. You could see all of this on that beautifully simple tool, the System Syzer. The late, great Gil Carlson had invented the System Syzer. 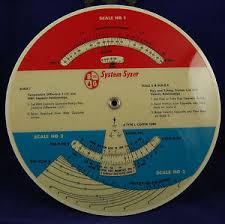 On it, he showed the normally used maximum flow rates for copper and iron pipes of various sizes. You could design for flows beyond these, of course, but you'd probably wind up with excessive pressure drop and velocity noise in most cases. If you stayed within Gil's limits, however, you'd be safe.

For instance, Gil's wheel told me not to try to move more than 4 gpm through a 3/4-inch pipe. The folks who make baseboard convectors show that very same limit, by the way. That's good enough for me. If I needed more than 4 gpm, I'd move up to a 1-inch pipe, which can handle up to 8 gpm.

When a contractor would call and tell me about the broken red circulator, and he didn't have any other information, I'd ask him what size pipe served the circulator. I'd figure that the circulator shouldn't try to pump more than that pipe could handle. Here are the limits I'd use:

And so on. If he could tell me the pipe size, I could tell him the flow rate. Was I oversizing? Nope, I was sizing up to the maximum flow you could move through that pipe without having a problem. Did the job need that much? Can't tell for sure, but I was thinking that if I were the original design engineer I would size my pipe just this way. I'd use the smallest possible pipe to get the maximum flow needed, along with the best possible economy for the building owner. If the job needed 45 gpm, why would I use a main larger than 2 inches?

But pump head is another matter. I learned that, while I had to figure my total flow on the needs of all the circuits that the circulator would serve, I would only have to base the pump head on what the flow would see while traveling through the highest-pressure-drop circuit. If my circulator was serving a two-pipe, direct-return system with five circuits, it would only have to worry about the worst-case scenario, which was usually the longest of the five circuits.

Direct-return is sort of like a ladder. Figure the left side of the ladder is the supply; the right side is the return, and the rungs are the circuits. If I put in a circulator with enough head to make it up the left side, through the highest rung on the ladder, and back down the right side, then the circulator would have no trouble at all flowing through the lower rungs while it was at it.

So once we figured out the circulator's flow needs (based on the size of the pipe it served), I'd ask the contractor what the longest circuit was. Then I'd allow 6 feet of pump head for every 100 feet of length in that circuit. Again, this is from Gil's System Syzer. When you're at the maximum normally used hydronic flow through a pipe of any given size, the head loss is going to be 4 feet per 100 feet. To this we have to add 50 percent to allow for fittings, valves and other components that create more friction loss than straight pipe. If I add 50 percent to 4 feet per 100 feet, I wind up with 6 feet per 100 feet. Easy.

The contractor would tell me the length of the longest (highest-pressure-drop) circuit, and that would give me the two things I'd need to size the circulator over the phone - flow and head. If he didn't know the longest circuit because all the pipes were hidden behind the walls and ceilings, I'd have him go outside and measure the length, width and height of the building. Then I'd imagine the longest run of pipe that I could put in that building.

I'd go from the left-hand corner of the building to the far end, then up to the top, across the top to the other side, down that side, back to the right-hand corner of the building, and finally, back to where I was standing. I'd base my pump head on that worst-case run, and then I'd select it from the pump curves in the manufacturer's catalog. And if my point of operation fell between a pump that was larger and one that was smaller, I would always pick the smaller one.

I did this for the 19 years I worked for the rep and I never once got a pump back. Was I oversizing? Not at all! I was sizing based on the existing piping on the job, pipe that someone else had sized based on the heat-loss of the building. I figured that if the pipes were the wrong size, someone probably would have noticed that long before the pump I was replacing had failed.

It's a simple method, based on common sense, and it works.