Why you should never dead-head a circulator When I was still young and very wet behind the ears I worked for a manufacturers representative in New York City and we sold Bell & Gossett pumps to wholesalers. It was my job to go out into the field with the contractors and look at things that had gone wrong. No one ever asked me to look at a job that worked. I spent my days looking at pure mechanical mayhem. I was sort of a hydronic policeman in that way.

One day, a contractor called to tell me about a large, base-mounted pump that he had installed in an office building. "I put in what the engineer specified," he said. "But this one is real noisy. I think we may need a new one."

"What sort of noise is the pump making?" I asked.

"It’s shrieking like a jet taking off from Kennedy airport," he said.

"It’s what happens when a pump is too big," I explained. "The pump tries to shove too much water through the pipe and that’s what makes the nose."

"But an engineer sized this," he said.

So I met him on the job and we put some gauges on this pump that was about the size of a sheepdog. I took the difference between the suction and discharge pressures and found that point on the pump’s performance curve. Sure enough, this one was way oversized and it had the velocity noise to prove it.

"I still think we need a new pump," the contractor said.

"Maybe not," I answered. "Let’s make a system curve here."

"What’s that?" he asked, and I showed him how to do this.

"We may be able to trim the impeller," I said. "We’ll put it on a lathe and make it smaller. It’s not my first choice as far as efficiency goes, but it will probably cure the noise problem."

"Yep!" I said with supreme confidence.

Well, he thought that I was so bright that he didn’t even notice the wet spots behind my ears. He just started asking me all sorts of questions and I was basking in the attention he was paying me. I felt like such a grown-up!

Needless to say, I wanted to answer all his questions, but first I had to find a quieter place so this is what I did (please follow this closely)

So there we were, this contractor and me. We’re standing just outside the boiler room. I’m talking; he’s listening. We did this for what felt like maybe ten minutes, but might have been longer. It’s hard to say. But it was right around then that we heard the explosion.

"What’s that?" he said, and it was just about then that I knew for certain what had happened because I had read about this in a book. You see, you’re not supposed to run a pump with the isolation valves closed. Energy in equals energy out, right? And if that spinning impeller can’t move the water, the energy of motion quickly turns into heat. And that leaves you one very scary butter churn.

"What the heck was that?" the contractor asked again.

We opened the boiler room door and my sphincter muscle did the mambo. Picture a rather large impeller spinning in space. The cast-iron volute is laying on the floor in chunks. I look at the contractor; he looks at me. He says, "Didn’t I tell you we needed a new pump!"

To which I instantly agreed!

Later, I went back to my office with my tail between my legs – a bit older, a bit wiser, and a bit more respectful of the power of bottled-up centrifugal force. We had an elderly engineer working at our company and he knew more than the rest of us combined when it came to things hydronic. I finally worked up the courage to tell him what had happened to me and he laughed until he got tears in his eyes. He had a way of turning your life’s disasters into engineering lessons. He wrote up a memo to all of us in the company, which I have saved for years because it made such a powerful impression on me. Here is the gist of what he had to teach us.

"Recently, I was asked if a relatively large pump could run in a shut-off position for a full, eight-hour work shift. My response was, ‘Hell no!’ The person doing the asking quantified by explaining that there might be a couple of hundred feet of three-inch pipe connected to the pump. I said, ‘Don’t do it!’

"I once attended a pump seminar sponsored by Chemical Engineering magazine. One of the speakers, the chief engineer for a major pump manufacturer, gave us a quick-and-dirty formula for calculating the temperature rise in the volute of a pump running with the valves shut off. Here it is:

"Let’s assume the pump in question contains about seven gallons of water and has a 40-HP motor. Throw in 200 feet of three-inch pipe containing another 76 gallons of water:

"Now, 1.23 degrees per minute time 60 minutes time 8 hours equals 590°F temperature rise. Neglecting the initial water temperature at saturation, we would approach 1,400 psig in the casing. Pumps don’t have that much safety factor!"

Then he gave us some other examples of this phenomenon. The one that stuck in my mind was the simple Bell & Gossett Series 100, that little 1/12th HP circulator that you’ll find in so many basements. Run a Series 100 with the valves closed and you’ll get a temperature rise of just over 50 degrees per hour. Makes your mind swoon, doesn’t it?

And consider a two-horsepower, Bell & Gossett Series 1535. That’s the little close-coupled, end-suction, base-mounted pump you see on so many cooling towers all across America. It's the one in the picture at the top of this story. Run that pump with the valves closed and you’ll get a temperature rise of 1,590°F per hour.

Hard to believe, isn't it?

Yeah, I thought so, too. 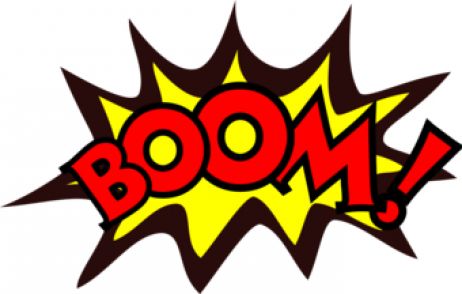