How to set and adjust the boiler pressure control?

A question often asked is how to adjust the steam boiler pressure controls properly.

While it seems like a straight forward thing, it is sometimes confusing because there are two different types of pressure controls for a boiler; Subtractive and Additive. 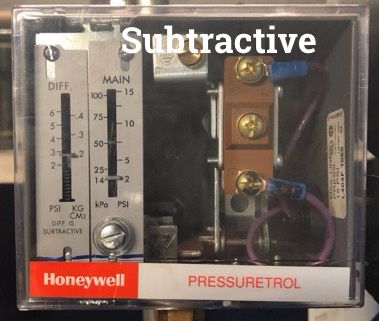 You start the boiler and allow the pressure to build. Once the pressure reaches your set point, 10 Psig, the burner shuts off. The burner stays off until the pressure inside the boiler drops to the differential (2 psi) setting minus the setpoint. In theory, our boiler will cycle between 8 and 10 psig. The following controls fall under the subtractive type of pressure control:

Johnson Control (Penn) P47 Series has two settings which make it a bit easier to understand. They have two parallel vertical scales and adjustment screws. One scale is the Cut In setting, and the other is the Cut Out setting. 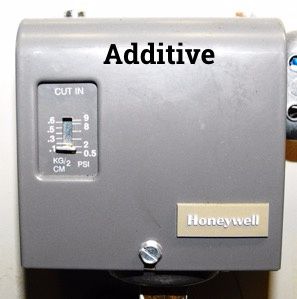 The Additive type control is a bit different to set and adjust. The number you see on the front is the Cut In or starting pressure of the boiler. Inside the cover is the Differential setting. If we want to operate our boiler between 8 and 10 psig, we will set the Cut In for 8 psig and the Differential for two psig. An example of an additive control is the Honeywell PA404 Series of controls.

The last control you will have on your boiler is the Limit Control. This control is there as the last resort protection in case of a runaway boiler. This control should have a Manual Reset button on the front. For breweries and distilleries, I like to set this for about 14 psig. I do not want to run it up to the top of the scale as I am a bit skeptical of the accuracy at the far ends of the range. Plus, the boiler relief valve is set for 15 psig. I am a bit leery of going to close to that setting and causing it to open and lose all our steam.