Is The Safety Valve Actually Bad? “Our safety valves keep popping. We’ve had a contractor replace them, but they keep going bad.” It was late on a Friday afternoon and the boiler operator was angry. “We need this fixed right away!”

“How many relief valves have you replaced?” I asked.

“Well, today they installed the fourth one,” he said. “But it also popped right after we fired the boiler. That contractor can’t fix this. Maybe you can.”

“Yes, four new ones, and they’re all crap!” he said. “I kept telling the contractor they’re getting a bad batch from their supplier, but he just doesn’t listen. Can you order us a different brand?”

“The safety valve may not be the problem,” I said. “It may just be doing its job.”

“What do you mean? If its job is to keep filling my boiler room with steam then it’s definitely doing a good job of it,” he said.

“Let’s check everything first to see what is going on,” I said. “The safety valve is set to pop at 150 psi. What is the pressure gauge showing when that happens?”

“That pressure gauge stopped working around the same time the first safety valve went bad,” he said. “We haven’t had time to replace it. We need to get this safety valve replaced with a good one first. Then I’ll worry about the pressure gauge.”

“Hang on,” I said. “I have an idea. Let’s take the pressure gauge off, start the boiler, and then see if any steam comes out of the hole.”

I removed the gauge and opened the vent on top of the boiler so I could see steam as soon as it started to leave the boiler. After a few minutes, the steam appeared. It came out of the vent, but there was still nothing coming out of the gauge port.

“What the heck is going on?” He was really confused now. “Why isn’t there any steam coming out of there?” He pointed at where the gauge used to be.

“On this boiler, the pressuretrols and gauge are mounted on the branches of what we call a control tree,” I said. “See how the contractor tapped the tree off the side of the low-water cutoff? If it doesn’t get proper maintenance, the fitting that connects the tree to the low-water cutoff will clog and the controls won’t operate.” 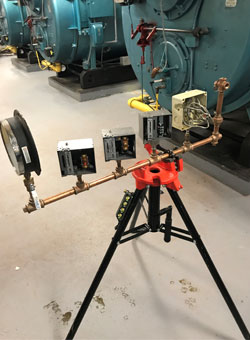 “So, if the controls can’t see the pressure in the boiler then what happens?” he asked.

“The pressure will build until the safety valve does its job and relieves it,” I said. “I need to rebuild that control tree.”

“Let’s get it done,” he agreed. “I hope I can return these new safety valves.”

After disassembling the control tree and removing the low-water cutoff’s head assembly, I confirmed the nipple and the elbow coming directly off the low-water cutoff were fully clogged. I don’t like the design of having all of the pressuretrols on a common pipe for this exact reason. One clog can take them all out and leave the boiler in a very unsafe condition. Only good maintenance can keep this from happening.

This was a high-pressure steam boiler, operating at 100 psi. The safety valve was popping at its set pressure of 150 psi. Instead of being piped outdoors, the safety valve’s discharge line was piped to the floor. When it popped, the entire boiler room filled with steam, which is a very dangerous condition that can lead to injury and even asphyxiation. I mentioned that to the operator.

There was nothing wrong with that pressure gauge. I sensed that because I have seen this happen before. I believe that you should never assume any device on a system is bad until you check everything. That relief valve was just doing its job. And in this case, that was a very good thing. It prevented a possible explosion.

Mike Sheppard is a commercial service technician in the Washington DC area. Mike specializes in commercial boilers and burners as well as large hydronic and steam systems.