Steam Is Coming From the Vent. Should I Be Concerned?

Makeup water is considered a steam boiler's worst enemy. Fresh water can take a system designed to last several decades and cut the life expectancy to only a few years. It is a good idea to limit the steam lost and the amount of makeup water introduced to your system. Since steam systems are open to atmosphere, there will always be a certain percentage of steam lost through evaporation or flash steam. Flash steam is the steam you see coming from the vent on the condensate or boiler feed tank. Do NOT ever plug or reduce the vent! It turns the tank into a bomb. Just thought I should mention that. 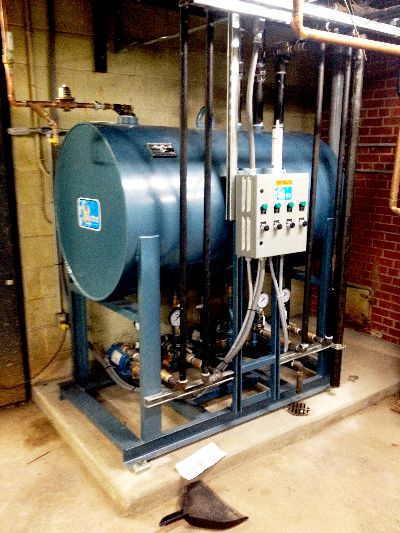 How much steam is normal? It should be an occasional wisp or small cloud. If you see a full pipe of steam chugging from the vent pipe, that is too much. You want to find the cause of the steam leak. That is your money wasted and the life of your system spinning down. There will always be a certain percentage of lost steam or water from a steam system. It is usually between 2-4% depending on the steam pressure; the higher the pressure, the greater the loss.

Makeup water contains several components which are not friendly to the boiler. The first is makeup water, or H2O contains oxygen. Oxygen molecules bounce around the inside of the boiler like a ball bearing. Each time they hit a surface, they take a small bite out of the metal. Pretty soon, you will develop pin holes in the pipe or boiler. If you have a leak in the piping, be sure to save a piece of it and show it to your water treatment expert. They may have to tweak the chemical treatment. If you look inside a leaking nipple when it is removed and see pinholes, that usually means oxygen pitting. If the bottom of the horizontal pipe is washed away or the pipe threads are thin and leaking, that most likely is carbonic acid.

The makeup water could also have solids or hardness which can cause the scale to form or the solids to accumulate. Scale forms on the hottest surfaces and impedes the heat transfer to the pipes, increasing your operating costs. It could also destroy the boiler in a more accelerated way. Solids inside the boiler cause the water level to bounce and creates wet steam which lowers your efficiency. One idea I like to see on a steam system is a water meter on the makeup water pipe. This will allow you to see if the system is losing water. I urge you to monitor water usage on a weekly or monthly basis to detect a leak. If you notice the use starting to trend up, you can be pretty sure the system is leaking somewhere.

A bit of advice, do not attempt to replace a leaking nipple on a Friday afternoon. There is no worse feeling than to put a wrench on the pipe and feel it collapse. Another consideration is if one nipple is leaking, the other nipples close by are probably in the same condition and tugging on them could cause them to leak. The reason I suggest waiting until Monday is many of the supply houses close for the weekend and you could have a room filled with leaking pipes and no replacements. I would suggest keeping some gasket material and hose clamps in stock at your facility. If you find a leak on a nipple, cut a piece of gasket material and attach it to the pipe with two hose clamps and watch it over the weekend. You also want to schedule some down time so you can work on the pipes when they are cooler.