One of the things I had to get through my thick skull when I was young and learning about steam heat was that raising the pressuretrol setting wasn't going to get the building hotter any faster. Cranking up that control is, of course, the normal reaction of most troubleshooters when faced with uneven heat. The steam doesn't want to go upstairs? Oh, I'll get it to go upstairs! And then out comes the ol' screwdriver, which knows but one way to turn. That being clockwise.

What I learned along the way, though, was that when you raise the pressure on your steam boiler, the steam doesn't go faster; it goes slower.

Seems crazy, doesn't it? It really goes against logic. You would think that if you raised the pressure at the boiler you'd be pushing the steam harder, so it should get to your radiators faster, right?

It doesn't. And here's why.

Take a look at the nameplate on the boiler and notice that the rating is in BtuH. As you know, that's short of British Thermal Units per Hour. It means that the boiler can raise so many pounds of water one degree Fahrenheit over the course of one hour. The size of the fire inside the boiler determines this. You can't get more heat out of the boiler than the fire puts in. If you raise the pressure, the amount of heat coming out of that fire won't increase or decrease. It can't be more than what the nameplate states.

So in one hour, that boiler will produce a very definite amount of steam. It won't do this in 50 minutes, or in 70 minutes. It will do it in exactly one hour. That's important.

Okay, let's consider the steam, which is a gas. When you compress a gas it takes up less space, doesn't it? Sure it does. You know this from everyday life. Just think about helium for a moment. You go to the store to buy a bunch of balloons for a birthday party. When you get there, you see that other people are also having birthdays. The ceiling at the party store is thick with bouquets of balloons, all waiting to be picked up by happy people.

Take a moment to notice how much space those balloons are taking up as they press up against the ceiling in the party store. Now look at that tall helium canister that the clerk is using to fill all those balloons. See how small it is compared to the volume of all those balloons? That one helium tank at the party store will fill about 600 balloons, each 11 inches in diameter. But how do they get that much helium inside that steel tank?

They pressurize it, of course (which is why the tank is made of steel), and when you open that tank the helium comes roaring out and expands like mad. Gases do that when you let them loose. The expand and contract in relation to pressure.

Okay, back to that steam system. Steam wants to move really fast, and that's based on it leaving the boiler at a pressure of just a few ounces per square inch (which is what you have when the boiler starts). Now, one pound of water will occupy about amount of the space that's inside a pint glass. One pound of steam at zero psi will take up 27 cubic feet (that's a cubic yard). Raise the boiler pressure to 10-psi and that same pound of steam will take up just 16 cubic feet. The higher you raise the pressure on the boiler, the more compressed the steam will be. It's like the helium in the tank at the party store.

Okay, hold that thought for a moment. I want you to take a ride with me. I want you to think about 1,000 Volkswagen beetles. Imagine them in a rainbow of colors and put a driver in each one. Let's call each driver Mr. Btu.

Now imagine a one-lane road that's one mile long. It can be a country road or a highway; it's your choice, but what you're going to do in your imagination is move those 1,000 Volkswagen beetles down that mile-long road in precisely one hour. That's the goal - to move 1,000 Btu per hour. You have to have that last car crossing the finish line when the clock strikes the one-hour mark. You can't finish a moment sooner, and you can't finish a second later. 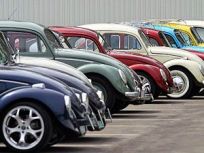 Us in 59 minutes, right? Nope, it's happening in one hour.

So if we're comparing Steam to Volkswagen beetles, we have to keep time in mind.

And did I mention that those Volkswagen beetles were all under 10-psi pressure? They are. Add that to your imagination. You've got the beetles moving down the road (or through a steam main) and they're all at 10-psi. That's why they're so small. The pressure is squeezing them.

Okay, time to get rid of the Volkswagens. We'll release the pressure on them, and when we do that, they'll expand like a gas. In fact, they'll magically transform themselves into big yellow school buses (Work with me on this.)

Now, bring the buses around to the starting point. Your job is to move those 1,000 big yellow school buses down the same road that the Volkswagen beetles just traveled. And you have exactly one hour to do this. You can't take a minute more, and you can't finish a second sooner. You have to do it in exactly one hour.

Ready for the big question? Which line of vehicles has to travel faster? The Volkswagen beetles, or the big yellow school buses?

Think about it. If the amount of steam the boiler produces in one hour is fixed (which it is). And if the pipes will always have the same amount of internal space (which they will). And if that steam takes up more space when it's at low pressure than it occupies when it's at high pressure (which it does!). Then we can say with absolute certainty that our given amount of steam, over the course of that one hour, within those pipes of a fixed size will definitely move faster at low pressure than at high pressure. It has to. The steam is as big as a school bus at low pressure. And it's turbocharged.

The Dead Men who designed those old steam systems knew this. They designed their pipes to deliver steam to your radiators at very low pressure. The lower the pressure, the faster the steam will travel. If the steam isn't getting to the radiators, it's not because of a lack of steam pressure; it's probably because the air vents aren't working, or they're in the wrong place. Replace or relocate them.

And crank down that pressuretrol. 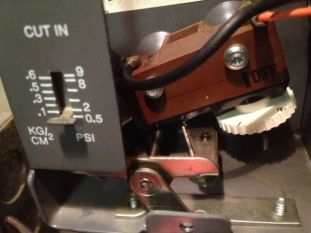