Need to get rid of the water hammer in a steam heating system? Here's a checklist of things to look for. I hope you find it a good one to keep on file.

The pipes don't have the right pitch. In any steam system, the condensate is supposed to drain by gravity back to the boiler or the condensate receiver. If water lays in the pipes between firing cycles, steam will pick it up and drive it into the first available fitting. Water hammer from bad pipe pitch usually happens when the system first starts. Steam will also rapidly condense over a puddle of water causing the water to snap violently up into the partial vacuum left by the condensed steam. The proper pitch for parallel flow steam mains is one inch in 20 feet. For counterflow mains, it's one inch in ten feet. Check the pitch with a line level.

The steam quality is bad. It's not just faulty near-boiler piping that can throw water up into the system. Dirty water, or water that has a pH that's too high can do it as well. This type of water hammer usually happens during the middle of the firing cycle. Look closely at the boiler's gauge glass. If the steam is dry, the part of the gauge glass above the water line should be dry as well. Try raising the water line to within an inch of the top of the gauge glass. If the water in the boiler is clean, it should not surge over the top of the gauge glass. Check the pH of the water with pH paper. A good pH for a steam system ranges between seven and nine. If the pH gets to 11, the water will start to prime and foam and carry over into the system, causing water hammer. Dead Men often added vinegar to steam heating systems to lower the pH and lessen the priming and surging.

The boiler is over-fired. If you over-fire a boiler, the water will surge violently and some water will carry over into the pipes. This type of water hammer usually happens during the middle of the firing cycle. You should fire to the connected load of the boiler (piping and radiation). This is the boiler's D.O.E. Heating Capacity load. Don't oversize replacement boilers. Always check the firing rate against the connected load.

The steam pipes aren't insulated. You're supposed to insulate the supply pipes in a steam system so the steam doesn't condense on its way to the radiators. Bare pipes lose about five times as much heat as pipes with a one-inch-thick insulation layer. Without insulation, the piping's ability to condense steam may exceed the boiler's ability to produce steam. You'll often wind up with radiators near the ends of the main that won't heat well. But worse than that, you'll wind up with water hammer when the system first starts. The cold, uninsulated pipes create more condensate than they can handle. When the steam hits all that water, you get water hammer.

There's a long nipple on the Hartford Loop. There should be a close nipple at the point where the equalizer and the wet return join to form the Hartford Loop. If you use a long nipple between the boiler's equalizer and the wet return, the returning water will surge forward violently as steam bubbles condense in the equalizer. A close nipple will lessen the distance the returning condensate has to travel and cure the water hammer. This type of water hammer usually happens near the end of the firing cycle.

The Hartford Loop's close nipple is too close to the boiler's waterline. Check to see if the water level in the boiler can drop to a point where steam can gain access to the wet return through the boiler's equalizer. If it can, the steam will quickly push down into the wet return and create water hammer. This usually happens toward the end of the steaming cycle.

The gravity-return line is clogged. It's going to happen eventually because a steam heating system is open to the atmosphere. The pipes corrode, and sludge, rust and sediment washes down into the gravity wet-return line where the condensate moves very slowly. As the return line clogs, the condensate has a tough time flowing out of the main and into the wet return. If water lays in the main, it will meet steam, and that's when the hammering begins. This usually happens near the far ends of the mains and almost always in the middle of the firing cycle. Water will also squirt from your end-of-main vents.

It's one-pipe steam, and the supply valves aren't fully opened. If they're not, you'll get water hammer as steam and condensate try to pass each other within that tight space. The valve on a one-pipe-steam radiator is a service valve. It has to be either fully opened or fully closed. Throttling the valve causes water hammer problems. If you think the valve is fully opened and you're still getting water hammer, check to make sure parts of the valve haven't fallen off and lodged in the valve's seat. If the valve is new, check its internal size. Steam supply valves of the old days had more space inside than their modern replacements. You may have to use a bigger size valve.

The steam traps aren't working. A two-pipe-steam system is like a ladder. Each radiator is a rung on that ladder, and at the end of each rung you'll find a steam trap. Part of the trap's job is to keep steam from entering the no-pressure side of the "ladder." If even one trap fails in the open position, steam will jump across and hammer into the water that's trying to drain from the other radiators. This water hammer will damage the working steam traps, and that will worsen the problem. At the ends of mains and at the base of risers, float & thermostatic and bucket traps serve the same purpose as radiator traps. If they fail in the open position, or, with bucket traps, if they lose their prime water, steam will move into the dry return lines and cause water hammer. Trap maintenance is essential.

In replacing the boiler, someone tuned a wet return into a dry return. If you have a gravity-return system the lowest, horizontal, steam-carrying pipe has to be a minimum distance above the boiler. In one-pipe steam, that distance is 28 inches. In two-pipe, gravity-return steam, you need a minimum of 30 inches for every pound of pressure in the boiler. So, for instance, if you operate the boiler at two-psi, you need 60 inches. If you operate the boiler at three-psi, you need 90 inches. The Dead Men knew this, and they piped their wet and dry returns accordingly. A new boiler with a low water line just might turn a wet return into a dry return. If it does, you'll have some very memorable water hammer in the middle of the firing cycle.

Measure the distance between the boiler's water line and the lowest steam-carrying pipe. And take your time looking around the basement because that pipe could be anywhere.

Oh, and do you the that steam radiator in the photo was hammering? 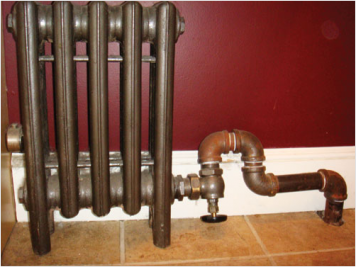