Geothermal Grows as a Great Alternative to Boilers A few years back (I’m thinking around the middle of 2012-2013), I found myself sitting at a table in Atlanta, GA with several HVAC industry folks. One man in particular grabbed my attention. Not because of his name, but what he did.

Dan Holohan had asked the waitress at this quaint little place in Serenbe how she was doing, and apparently he was not satisfied with her response. He gave her a card and said she should call him. The conversation turned back to business, but I could see that Dan was distracted. Later, I saw him speaking with this young lady, providing counsel of some sort. I filed the memory away.

In the Taco-HVAC booth at the AHR Expo in Las Vegas last month, I ran into another young lady named Erin Holohan Haskell, Dan’s daughter and if I may be so bold, his legacy. I thought back to my experience with Dan a few years back. As a father of 6, I want for one of my children to carry on the work that I’ve done for the last 30 years. We talked for 15 or 20 minutes and I was impressed with so many things. She said that it would be good to get a “Geothermal Corner” going on Heating Help, and I wholeheartedly agreed. 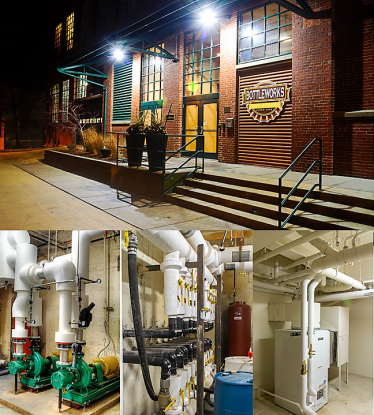 I spoke with Greg Cunniff about joining me in the effort to contribute. Greg’s reputation precedes him as a hydronics expert. He is the Manager of Application Engineering at Taco, and co-wrote the McGraw-Hill textbook, “Modern Geothermal HVAC Engineering and Controls Applications”. At the Radiant Professionals Alliance (RPA) Social and Networking Event on the evening of Jan 31, the organization’s first “Lifetime Achievement Award” was presented to Johnny Hazen White Jr. of Taco for his exceptional support of the RPA and the creation of the Building Energy Efficiency Rating system. Then they gave an additional award to Greg Cunniff of Taco for his diligence and work in bringing the system to reality.

I’ll be attending a conference in Ontario, Canada next week at which the subject is geothermal implementation. New York State is on the same track with New York State Energy Research and Development Authority’s (NYSERDA) “Renewable Heat and Cooling” effort there. Here’s an article that shows some of the good work going on in New York, and here’s another article about Ontario, Canada.

Jay Egg is a geothermal consultant, writer, and the owner of EggGeothermal. He has co-authored two textbooks on geothermal HVAC systems published by McGraw-Hill Professional. He can be reached at jayegg.geo@gmail.com.